My first Taupo! (from the vorb files)

Anyone who reads this thread will be aware of how little riding I've been managing to do lately. The road season started off with a hiss an a roar for me (with the Balfour Pennington handicap series), but my early season form didn't seem to come to much with a series of disappointing graded races. Work has also been crazy, and I've an awkward after school schedule, which has meant I've had difficulty sneaking in a lunch time ride. Nonetheless, I thought there could be no better way to head up for my first Lake Taupo Cycle Challenge. I was confident I could get myself around, and although I signed up for bunch 1 in the solo, I was anticipating getting dropped at some point.

The longest road ride I'd done this winter was the Wellington Centre Champs (at Otaki) debarcle - 120km, consisting of 2 laps at race pace, 1 lap solo (after being dropped), 1 further sifty lap with Joel, and then a solo ride back to Whitby. I'd had a good quality weekend with Simon in the Central Plateau a month ago, but the longest ride there was only 80km. With luck, I thought, my body would remember what riding for 4+ hours felt like, and some short sharp efforts on the MTB will have maintained some semblance of fitness and power...

I drove up on Friday with Simon and Jonathan Kennett, and Alex Revell, who were entered on the Kennett Bros' triple. I was pretty amazed that it got in the van - lashed above the rear seat... Alongside it was my bike, and Jonathan
s Penny Farthing, which he was set to ride this morning in the record attempt... We had a great drive, and although Simon was due at a meeting in Taupo at 3pm, it was pretty unpressured stuff. There was a fair bit of traffic on the road, but no one doing anything dumb. We didn't see any Maxi Enduro riders on the east side of the lake, unfortunately.

Friday afternoon and evening were most enjoyable, and we sifted at the events centre, I did some supermarket shopping, and the lads put their bike back together - including replacing a seatpost on the triple that had got stuck, requiring a crow bar to be used against a nail that had been inserted into a hole drilled into the post...

The four of us managed to get through most of a kilo of pasta, a bit of brocolli, tuna, tomato puree, and some tasty cheese. Then, it was off to hear Simon redescribe his Great Divide Race, followed by Steve Gurney. Jonathan had scored a DVD of some old Dulux Tour (1960, Auckland to Wellington) footage, so we watched that and then all drifted off to bed.

I wasn't quite sharp enough in the morning to watch the Classic start, butI must have only just missed it when I rode off to the start line. Conditions were perfect, and it was already warm enough to be comfortable just in my Roadworks jersey. I love putting it on before a race, and always feel a small charge run through me - I like to keep it low key, but I'm sure the jersey is part of my "process".

This day, my pockets were loaded with three bananas, a one square meal bar, a spare tube and pump, and my cell phone. On the bike, I had a second tube, tyre lever, repair kit, and CO2 canister, and two bottles of fairly dilute Horleys Replace.

I was little nervous as I rode across the Waikato River flood gate, and up through the roundabout at the north end of town, but the start area was very well marked out, and I found myself a spot at the back of 1C. [Interestingly, a guy I finished just behind on the line has a time listed as 10 seconds slower than mine. Not a bad strategy turning up later than everyone else!] I thought the organisation was very slick, as 1A, and then 1B were set off, and we were given our safety briefing. I didn't recognise many in my bunch, but had chatted to Ian Paintin, and also spotted young Luke McDermott, who later in the day won a nice new Skoda sedan!

And then we were off!

There was nothing particularly urgent in the way we moved off the line, and away from Taupo, and it felt good to get going. The bunch began to spread out pretty soon, with people trying to get across to 1B up the road. I'd wondered about this, and decided against going too hard early on, but found myself riding at a fairly comfortable place near the front of the bunch. After picking up stragglers for what must have been half an hour or so, we caught sight of a fairly sizable bunch. In the end I was the first across, catching up to them just at the top of a 100m climb. One of the advantages of being 85kg+ is that you roll down hills a lot faster than 75kg riders. On this particular occasion, I was damned if I was going to brake down yet another downhill, leading into yet another climb, so I slipped into the middle of the road and blasted up the rise. The rest of the bunch weren't far behind, and we were joined very soon after by a pair of tandems from the start behind us. They were carrying an impressive amount of momentum, but given my own experiences on the descents, I shouldn't have been surprised! 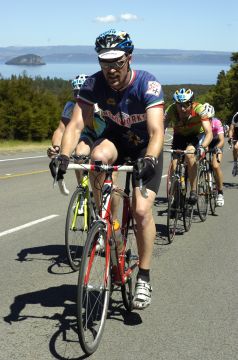 There was nothing particularly notable about the riding until about Turangi. That said, it was nice to chat to a few people, including Ross Watson, who'd been a bunch mate of mine in the early season races, Peter James, Mike Peach (not related to Ian Peach), Ben Revell, Alex's brother, and Shane Collett, albeit very briefly! Kuratau came and went, unlike some of the hills we have in Wellington which leave a much more lasting impression!

After Turangi, things seemed to hot up a bit. We had a light head wind, and while the bunch was generally keen to see the pace come on, no-one really wanted to take control (including myself). I was feeling pretty good, and had lead the bunch for a while on some of the first half, but I was wondering when the wheels would fall off, and I was wary of over exerting myself at this point. I let myself get near the front, but I started to have trouble with the surging that was going on (I assumed the riders at the very front were taking a pull, and then slowing down as if to say "who's next?", and fair enough) - the constant braking and then accelerating to close the gap again was reminding me of some of my mid-season failures, and so I prudently chose to drop back a bit.

Actually, here might be a good point to say that riding in a large bunch was a bit of a revelation to me. The bunch riding I've done has typically been a bit of a hammerfest, leaving me pretty exhausted. Most of my road riding has been solo, or when I've done the lion's share of the work. Sitting in a huge bunch, expending very little effort for great progress was damn cool!!!!

Eventually we got to Hatepe, and I was feeling in good shape having had the bunch close up a bit and work a bit more constructively. I rode a good tempo up the hill, and crested in a bunch of about 7. By the time we got up to speed, we were a hundred metres or so down on 4 or 5 riders from our group. I have to say my companions were excellent. Whatever our motivation (wanting to catch the guys in front, wanting to stop riding, BBQ, icecream, whatever), we all pretty much wanted the same thing, and that was to go fast. The "race" got exciting for the first time, and actually felt like a race. Ross Watson was there, and we had the chance to comment to each other "this feels a lot more familiar!" Who knows how fast we were going, but we were working hard, and got a good pace line going. I decided to give it my all, knowing that if I blew, there wasn't that far to go, and there were a few hundred riders not far back down the road who I'd be able to hide in if need be.

When we got to the descent, we had made decent headway into the group ahead. I was in about 4th wheel, but was able to roll past the three ahead of me, and the group tucked in behind me. At the bottom, we were only a few metres down on our targets, and we had a good speed advantage on them. I think they were a little shocked as we hurtled past them, our paceline already back in effect. They latched on, though one got shouted at a little later when he seemed to sit up in the middle of the paceline! He got the point though, and we worked well together all the way back to Taupo. We picked up Mike Revell, who joined his son Ben in the bunch. Crafty of Ben to send his leadout man up the road!

By the time we hit the lakefront, I was still feeling really good, despite having ridden hard up and over the short climbs en route. Along the waterfront I could sense people getting nervous about the sprint, and in particular, bunch safety. "Remember guys, we're sprinting for 700th place" was the comment someone made, and with that in mind, I was content just to roll over the line, mid-bunch.

I thought to look at my watch a few minutes after finishing, and estimated a time a little under 4 hours 30. The results I've seen this evening have me down as 4.21.55. The time doesn't mean much to me, but I was thrilled with my overall performance in the event. Particularly, I'm absolutely delighted that despite not doing much of the sort of riding I would have chosen to do for this event had I had the chance, my body still was capable of getting me round without crapping out. I was glad I chose the bunch I did, and I am excited about the next couple of months. At least I've got an OK base to launch into some decent endurance rides, hopefully losing a few kilos in the process!

I'm looking forward to the Makara Peak Rally next weekend, and a 4 hour rogaine out at Pencarrow Head on December 20. Simon and I will defend our 8 hour Akatarawa Attack title in late January. I look forward to some long road rides in between now and then, possibly including some touring on the east cape, and a possible "Ride around the block" (the Tararuas) with Simon if we can find some time!

PS: I managed to get back to the waterfront in time to watch the triple go by. Simon (captain), Jonathan (second seat) and Alex (rear stoker) all had their heads down and grimaces on the their faces. It turns out it's bloody hard to cheer for a triple moving at 50km/h+ "Go Simon, go Jonathan, go Alex" takes just a little too long to get out...

There was one guy on their wheel - apparently only one rider can draft the triple down off Hatepe. They hit speeds around 100km/h, and the wind profile is such that the second bike back simply gets too much air, and can't keep up! So the one lucky guy got to join them back to Taupo. Their bunch was about 200m back!
Posted by sifter at 8:55 PM 1 comment: