The second Tāwhio o Whanganui is just over a week away, and I'll be using it to check out the set of gear I'm planning on taking to France in June (minus my passport).  There really isn't a great deal of change from my Kiwi Brevet list, but it's wet outside, and I'm in the mood!  Hopefully this is useful to someone (other than me)!

I'm a huge fan of lycra jerseys, mostly because you can put a hell of a lot in the pockets, and they hold their form.  On my rare forays into the world of merino jerseys, the inevitable sagging-under-load makes me regret my choice.  If the weather is likely to be cold, it is hard to go by a Castelli Gabba.  The pockets are a tad on the small side, but the wind and water shedding properties are worth the ticket price.

I've recently bought a Gore Bike Wear Fusion GT jacket, and am super impressed with it.  A hood is available as an add on.  Ground Effect do great overtrou which keep you dry, but also keep the chill out on long descents (even if it's not raining...).

While I kind of like the idea of putting on a clean set of riding gear each day, I detest the thought of hauling smelly clothes.  So, I don't take spares.  The chamois gets a good rinse each evening, and is rolled up in a towel if one is available.  The first few minutes in the morning are always unpleasant, but that is short-lived.


Thanks to Ollie Whalley for the Mont Bell recommendation - as he told me, and I've since discovered myself, it's a fine bit of kit.

A while ago, I did weigh undies+shorts vs a pair of boardies, and the boardies won out.  For a short trip I might save a few grams and go with the boardies, but I don't think I could cope psychologically with a month without undies.  What doesn't kill you makes you stronger, and all that...

I'm a credit-card tourist, and obviously pack assuming I'll be indoors once I stop riding.  Even if some of the above gets called into the "On the bike" category, I reckon I'll be warm enough come the end of the day.

For storage purposes, I'm a big fan of the following combo: 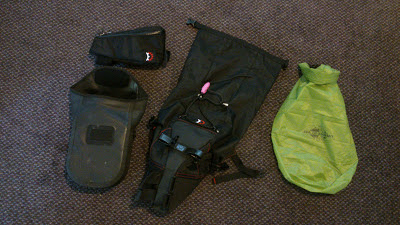 The Ortlieb bag is not the most beautiful thing, but god damn, it works.  Super easy to get in and out of (a single velcro closure), and the capacity is sufficient for the amount of gear I take, but not so big that you worry about the mount breaking off-road.

The Revelate Viscacha's only downside is its pronunciation.  It is a great size, and beautifully designed.  It seems incredibly stable, and moves with the bike in a way that lets you forget it's there. The fabric is waterproof, but it's not seam-sealed, so I've added the dry bag (all 40g of it) - uber lightweight fabric means it's easy to stuff it into the Viscacha.  The taper up to the seatpost is great too for minimal thigh rub.  A bit of elastic through the loops in the top of the bag make for easy stowage of a jacket (or jandals, if they make the cut)! That all said, I'd definitely swap it out for a freeload rack for a trip with a bit of technical mountainbiking, since the bags don't cope well with emergencies off the back of the seat!

I usually go without the tri bag, but it's a great option if you've got a long way between shops.  It'll fit almost as much food as a jersey pocket can.  The one shown is a Revelate Gas Tank - as yet unused - but it looks the bizzo. 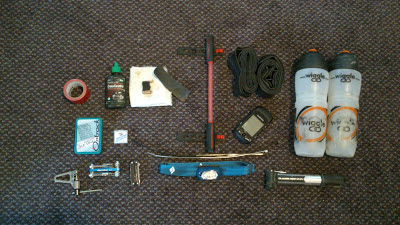 I mount the pump to the bike, and for MTB trips I tape the tubes to the frame (near the junction of the seat tube.  This is a bad spot for them if you wear baggies - I know Jasper rubbed holes in both his tubes at the Kiwi Brevet.  But for me and my spandex, it's not an issue.  Roadie tubes take up a fraction of the space, so they make it into the handlebar bag.

I try not to use a tyre lever at home, so usually don't pack one.  It's probably worth checking your tyre and rim combination though. I've heard a quick-release lever is a good emergency option.

The rear light I put on my seatstay since the seatpost real estate is the Viscacha's.  A bike-mounted front light is a bother with the handlebar bag and is a good reason to avoid riding in the dark.  To France I took a USB charged Exposure Joystick.  It has three brightness settings and a bunch of other modes, mounts onto the helmet (or handlebar) with a simple plastic mount, and comes with a lanyard in case you don't duck low enough (not needed to date).

It's definitely worth being thoughtful with your multitool choice.  I've done at least one trip where I didn't have the right tool to replace the disk brake pads (I think an odd hex size), though I had the wrong pads too (I simply grabbed the "cycle touring kit" without thinking about which bike I'd last ridden).  Megan and I rebuilt an allen key set in Africa so we had everything on both bikes covered (within reason).  You might be able to forgo the chainbreaker too, though I prefer the dedicated, and less fiddly, tool. 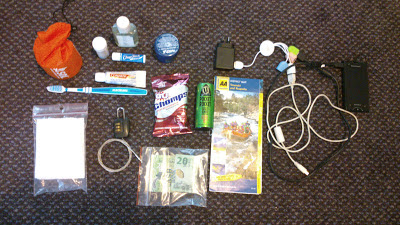 The chamois cream I like is Sweet Cheeks Butt Butter - keeping me fresh since '09.  And, I swear by Sunsense Sport Gel.  I've decanted both these into smaller containers.  The little antibacterial hand wash bottles make an excellent sun screen repository.

I'm still on the hunt for a regular supply of small toothpaste tubes...   Last resort might have to be Amazon, though, it may be that you have a dentist friend who might just happen to say, "I've got heaps of those at work, bowl around and pick some up"!  (Whoop whoop!)

I've loaded up a small pill bottle, but cram a few squares of toilet paper in the top to stop them moving around too much.  Would make quite a snort-fest combo if it all turned to powder!

The charging solution picture failed miserably on the Tawhio - the current passed was not enough to cope with my phone and GPS unit, and I woke to one at 100%, and the other at 0%.   The Korjo 4xUSB power hub was a great catch at the airport on the way to France, and can cope with 4 devices at once.  Its only downside are the blue LEDs, though I've found draping my undies over it cuts the light out perfectly.   While looking for one recently, I discovered the most reliable stockist in Wellington was the airport.

It would be really nice to have the USB cords at about a quarter of their current length, but it all seems really efficient as is.

I think GU Chomps (with caffiene - not all flavours do) might be a pretty good energy option, though I have a small "V Pocket Rocket" which I carried last trip (but is otherwise untested).

I've got a
which I'll take with me for MTB-type tours.  Being thirsty sucks (as does a case of the shits...). 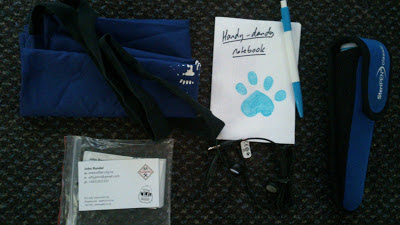 Last, but certainly not least...

The one thing almost as important as the bike...


A carefully selected humble cell phone doubles as a camera, backlit notepad - I've transcribed route notes into mine before leaving home, and made notes during the ride too, voice recorder, MP3 player (headphones provided separately), substitute GPS unit (?), and of course telecommunications device.

I now have a Sony Z3 Compact, which seems to take very nice photos (provided you don't scratch the shit out of the lens).  Keeping it in flight mode (and turning it off overnight I suppose) do wonders for the battery life.

It looks like a long list, but as you can see, it packs up nice and tight...


PS:  I paid for everything I mentioned!