Sifter rides bikes all weekend (from the vorb files)

After a wonderful weekend, it's interesting to find myself not craving the therapy that is writing! Nonetheless, I'm going to give it a wee crack.

An opportunity to hang out with a friend on Saturday morning was too good to miss, so I didn't end up riding out to Whiteman's Valley as planned. Instead, I dragged the Roubaix out of the boot just before 1pm, and did a 15 minute warm up with Dan Waluszewski. We hadn't really talked before, but it was nice to ride with such a top bloke.

I started in B grade at arond 1:45 - it was warm, with a bit of a Northerly blowing. We headed north over Cowpat Hill, and then a short climb then down Mangaroa Hill. I'd chosen not to wear gloves, though won't make that mistake again. The short but technical descent was much more nerve wracking than it needed to be with my sweaty palms sliding around in the hoods...

With a nice tail wind, we galloped south through the outskirts of Upper Hutt. I had an absolutely lousy line into the turn up Wallaceville Hill, which saw me go wide around a patch of gravel and lose all my momentum, and start the climb in dead last place out of 19 starters. I'd driven this hill an hour or so earlier, and it had seemed pretty benign in the car - not quite so easy on the bike, but I crested about 20m down on Rob Kilvington, Ian Paintin and Emma Crum. A minute after, I was in no-man's land between the leaders and the bunch, with one other rider. I asked him what his intentions were - he said he was stuffed - so I put in a burst to catch Rob, Ian and Emma a few minutes later. My lack of experience kicked in here, and instead of tucking in and having a breather, I used my speed advantage to come to the front, and immediately settled into work. Ian, Rob and I rotated for the next 10 minutes or so, before things caught up with me, and I sat up - I knew I couldn't cope with the speed we were doing for much longer, and I didn't want another solo ride or DNF after the last few races... At that point, I scoffed some banana, and had some drink, and waited for the cavalry, who arrived directly!

By the time I'd rejoined the bunch, Ian and Rob had seen the writing on the wall too, and had eased off. A few minutes later we were all together, upon which time Sepp Hribar set off on his own. Having warmed up in the valley, I knew the head wind home was going to be tough, so didn't mind seeing Sepp (an awesome sprinter) out on his own for a lot of that leg.

The second lap was a fascinating blend of tootling along (as if popping out to the dairy) and hammering (as if chasing the bloke who just flogged your purse). Unfortunately, my structured training program (commuting, and the occasional race) doesn't have much of this in it, and not only does it do my head in, but also causes my legs some grief. I was feeling on my limit on a number of occasions - Rob was putting in some powerful attacks, and Ian was riding very strongly too, as were others in the group. A couple of kilometers out I was actually feeling OK, and probably should have moved to the front of the group, but had absolutely no confidence that I would have anything else to offer, so I sat at the back, took a lousy line through the right hand turn 150m from the finish, and rolled over the line at the back of the bunch.

It was a frustrating race, but it had a few positive aspects. I think I'm beginning to understand the sport a little more, and realise that if I want to do well, I need to structure some intervals into my week. I'd blown the corner at the bottom of Wallaceville on lap one, so I lead through that corner on lap two (and gave myself a little pat on the back as I eased off and let the bunch take over on the climb). I also saw how crucial positioning is at the end.

I had a nice drive home, feeling pretty satisfied with the race. After some food, I started to run a bath when I was invited to go to Karori Pool for a swim. I drained the bath, the spent the next hour or so alternative between the spa, and doing laps (500m swum all up - bikes are so much quicker!) Was a great way to finish a lovely day.

By the time I'd got home on Saturday, I'd committed to riding the PNP XC race at Mt Vic on the Sunday. I checked the course details, and knew that I really had no choice but to ride Masters 1, consisting of 2 long and one short lap (Pro-Elite did 3 long). My MTB of choice needs a little work (the BB's not very happy), so I was on my carbon Giant XTC - a lovely light bike, but one which really beats me up. I've done almost all of my mountain biking on a fully, and this hard tail has particularly narrow handle bars, and I've never really worked out quite how I should set up the Reba fork. No matter!!!! I was really looking forward to getting out on my first MTB race since March (the Wainui MTBO aside).

My warm up consisted of sifting in the sun, a short 4 minute lap up behind the velodrome, and enough laps on the velodrome itself to work up the first drops of sweat. I lined up with 29 M1 starters, and was at the back of the lead group half way up to the road crossing (damn that sounds silly - it was only 2 minutes into the race...). My legs felt OK on the climb and I didn't lose too much time on the climb to the summit (I'd commented to a few people that they felt superficially wonderful, but that I wasn't sure how they'd go when the going got tough). I hit the singletrack with a guy on a cyclocross bike with deep dish carbon rims hot on my tail. 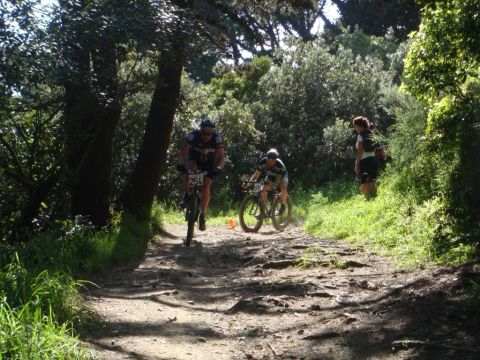 His brakes were howling away, and through the din, I'm sure I heard a "spectator" shout: "get back on the road" or some other nonsense. With deep respect for the crazy bastard, I was happy to let him go 5 minutes later, if only so I didn't have to hear those brakes any more...

I suffered a little from not checking out the course in advance - there was some nifty track consisting of a series of big dippers that I hadn't ridden before, and should have been able to ride a bit quicker on if I'd had a couple of cracks at it prior. Above Wellington College I bounced off a rock just as I was leaving the 4WD road, and planted my bar into the bank. No harm done, I carried on. Around this time, I had some shifting issues, periodically losing the services of my granny ring. I'd reorganised my cockpit a little, and I think the shifter was a little loose, and clashing with my brake lever.

On and on went the race, and I was having an absolute blast. I was being shaken around a lot, and handed off my sunnies to my parents who were watching from the corssing of Alexandra road - I was able to pick slightly better lines after that! I was also being passed by guys in my race, as well as in other grades, but I was getting exactly what I was after - a good solid ride on a MTB! I finished with a huge grin on my face, and have kept it on for the rest of the day.

I spent the afternoon with my brother and sister and a couple of friends, at Waitangi Park. Kaitlyn had her bike, and it was fantastic to watch her hurtling around on it. It was perfect summer's afternoon, and apart from our handstands, cartwheels, and wheelbarrow races (as well as a 6'3" man riding a 20" kid's bike around in circles and then realising that the brake levers hit his knuckles before the brake pads hit the rims), we had people playing touch rugby, frisbee, and bats-down (a real blast from the past for me) to watch.

On the way back to the car, Katy spent some time on one of the skate runs. It was a series of ramps in and out of pits. She was initially too scared to ride down one, but I managed to convince her to try it, and was able to watch lovingly as her confidence and control grew. We'll be going back there regularly for a while. 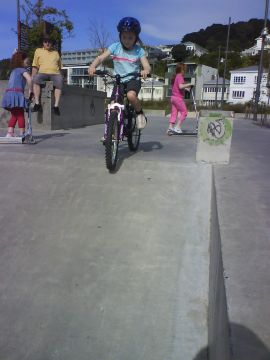 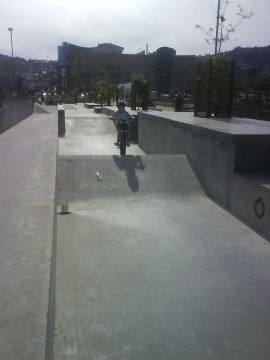 Please excuse the profane ending to this, but "a fucking fantastic weekend" is so damn apt, I can't resist using it!

Originally published on vorb
Posted by sifter at 8:44 PM