The final week of Le Cycle Tour de France continued to dish up delights on a daily basis.  And, some pretty hard days.

I left Le Bourg d'Oisans on a stage route from this year's tour - one which I look forward to watching with friends on telly tomorrow night.  I'll be interested to see how the peloton fares, because I suffered like a dog!

I was surprised to see the profile of the Col du Glandon after the fact, because my impression of it must have been affected by the effort up Alpe d'Huez the night before.  It had what seemed to be some ungodly steep sections, and a couple of descents which were surely screwing up the average uphill gradient.  Unlike the pros, I took a short detour to summit the Col de la Croix de Fer, before dropping back down to cross the Glandon.

Before tackling the Col de la Madeleine, another side trip beckoned - this time to the first few kilometres of the Col du Chaussy climb (google images it!).  The Madeleine itself felt like less of a slog than the Glandon, perhaps due to the more constant gradient.  I met fellow Wellingtonian Silas Cullen near the bottom of the descent, and we rode together over the next col, before heading to his place.  I very much enjoyed staying there with his family, and conversations with them, and their dinner guests Sarah and Brendan, really had me hankering for home.

The next day I rode the Annecy-Semnoz stage of this year's tour on a whim.  It was a very hot day, and even without my gear felt pretty gruelling, particularly the hilltop finish on Semnoz.  It was good to get out though, and will be much more fun to watch the race coverage now!

Silas and I rolled out the following morning, and resumed the Le Grand Bornand stage with the  cat 1 Col de l'Epine before he left me to my own devices on the Col de la Croix Fry into Le Grand Bornand.  It was wet, and pretty cold up top.  I stripped down on the main street of Le Grand Bornand to put an undershirt on, before getting underway again.  I was bound for Morzine, and got there via the second half of the stage on which Floyd Landis went ballistic before being stripped of his victory:  first the cat 1 Col de la Colombiere, then a couple of "minor" bumps - which never seem to feel minor - before the HC Col du Joux Plane.  The descent of the latter sucked - the rain was very heavy and I in turn was heavily on the brakes the whole way down.

The next morning was another social highlight, and I had the pleasure of coffee with more Wellingtonians:  Steve and Nessa, and Mike the Hippy.  Following that, I had a cruisy ride through to Geneva, where I replaced my very square looking rear tyre, and then another couple of hours on the bike - and my fourth unmollested border crossing - to Bellegarde-sur-Valserine.  There, as my brother cleverly suggested, I got some Valserine intensive care, including a haircut from the most particular barber I've ever watched.

The following day's stage I'd been looking forward to all trip - a reverse of the 2012 stage from Macon - featuring the dramatic Col de la Grand Colombier.  Unfortunately, the road itself looks much better from a helicopter, but the views over the surrounding countryside well and truly made up for that.  I had a bit of a mare finding accommodation in Macon, but got something sorted before losing my rag.

The next morning I decided to take a short cut.  Instead of riding 35km to Bourg-en-Bresse, I rode 10km north of Macon, hooking into the stage about 30km in, thereby saving myself 55km riding, and ensuring I got to Semur-en-Auxois in time to see Chris Froome let loose on Ax-3-Domaines, an ascent I'd made myself a earlier in the trip (at about half the speed).  It was worth the sacrifice of "completing" the stage of the day.

I'd been unable to find anything to get me close to a stage town near Paris, so rode a route of my own design the next day.  It was a Sunday, and I got totally screwed over by the French tendency to shut up shop at midday.  Dinner added about 20km of riding (on top of about an hour's walk) to the day which was a drag, but ensured I cracked the 4,800km mark for the trip!

The final assault on Paris, on the other hand, was about as good as I could've hoped for.  The only minor glitch was a road disappearing under a railway line through a tunnel in which bikes were "Interdit".  I wasn't prepared to run the gauntlet, but after a few minutes of hunting around found a pedestrian underpass prepared to share...

I was all set to unleash up the Champs-Elysees, (or at least try to), but both the traffic, and regular traffic lights (which strangely I'd never noticed in the tour coverage) put paid to that before my weary legs had a chance to!  I was fortunate some British tourists were on hand to prevent my celebratory photo being of my bike! 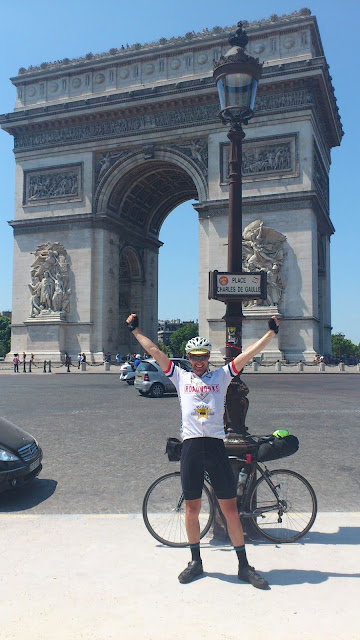 I spent the next day trying in vain to find some decent cycling-related souvenirs, before making my way out to the airport.  Four flights later, I was being welcomed home by my beautiful daughter, parents, brother, and friends Simon (with extra hug on behalf of Oli) and Ash!  That was a week ago, and while the fingers on my left hand are still numb, it's not the only thing that's followed me home.  So too has my awesome mood, and long may that last...

I've got plenty of tales to tell that haven't made these short versions, nor feature in the photos on Facebook.  I'm not sure what form that might take.  At the very least, I'd like to do a quick blog with some fun stats from the trip - once I've compiled them.  Also, I'm thinking of putting together a slide show which might entertain a few friends one cold, winter's eve.