Disclaimer:  there's no bike riding in this story.  But, it has so many elements in common with what I'd consider a great ride, I hope you don't mind me putting it here...

The Brevet was a full two months ago, and I'm still struggling a bit for motivation to ride the bike!  So, instead of sitting around growing back into my work clothes, Simon and I signed Makara Peak Mudslingers up for the Moonshine24 - well, the short version of it, consisting of a 6 hour rogaine between 6pm and midnight and another 6 hour rogaine between the following 6am and midday.  Such things simply can't be done on the back of TV watching, so we've snuck in a couple of "runs".

I used to run a lot - for 4 or 5 years, I used to run almost every day, for up to a couple of hours.  Due to injury and sloth, I stopped running, and eventually got my physical kicks racing bikes instead.  These days, my run consists of an awkward looking waddle, and up until recently it's been a struggle to "run" for more than a few seconds at once!

Prior to the Akatarawa Attack, Simon and I realised a key element of the event was off-bike travel, and so built some running into our preparation.  In the end, we probably spent about a third of the 8 hour event on foot.  The Brevet also had a bit of walking, primarily between Big River and Waiuta.  The Moonshine24's given us something to focus on, and an opportunity to get some exercise without having to clean our bikes!

Mt Matthews is the highest peak in the Orongorongos, and is the closest "high" peak to Wellington.  Following a short assault on Colonial Knob above Porirua last weekend, we'd penciled in a day trip to Mt Matthews this Sunday to give the legs a final trashing before the big event.

I collected Simon at around 9am, and as we dropped down Orangi Kaupapa Rd towards the motorway, we were given a great view of our target. 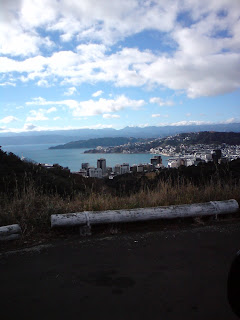 We were parked up and on our way shortly before 10am.  The ford at Catchpool is currently being rebuilt, so we had to walk the last kilometre or so to the carpark.  On the way we passed a group of Maori practising with taiaha.  Not the sort of thing you see every day (unless you watch Whale Rider every day).   Apart from the very steepest bits, we managed to run all the way to the river.  I couldn't help but wish for my bike at almost every instant.

When we reached the Orongorongo river, we took the upstream track through the bush.  Every now and then it tried to spit us out into the riverbed, but we resisted, largely due to a desire to keep our shoes dry.  Eventually we relented, and managed to jump over the few stretches of running water between us and the other side of the valley.

The track to Matthews starts by following Matthews Stream away from the river.  It was immediately obvious that there'd been a huge slip up the valley somewhere, and the whole streambed was buried beneath a fairly uniform amount of gravel with barely a furrow in it.

After a 500m or so, we suddenly heard running water for the first time. 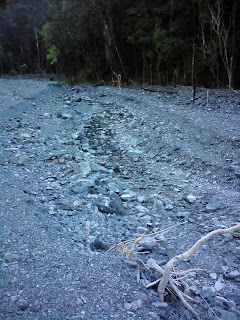 Up to the point in the photo, the stream was running beneath the rubble.

The going got more and more difficult as the pile of rubble got deeper, and the waterways had cut deeper trenches into it.  Eventually we reached the bottom of the main climb, and stopped for morning tea.  Evidence of the magnitude of the slip was apparent, with deep cuts, and trail markers - usually at head height - only a foot or so from "ground level". 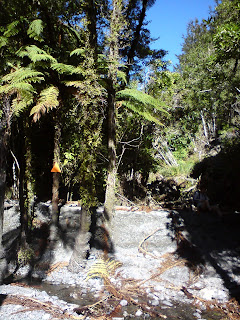 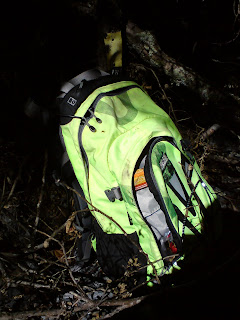 The climb proper was about 750m, straight up.  A lot of what we'd covered so far had been done at a jog, and would have been quite rideable, some of it stunningly so.  Now the going got a lot tougher, and we were gaining about a metre in altitude for every half dozen steps.

About half way through the climb, the track breaks out of the bush temporarily.  Here, we were afforded views south to the coast along Mukamuka Stream and northwest towards Wellington. 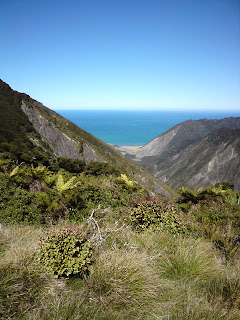 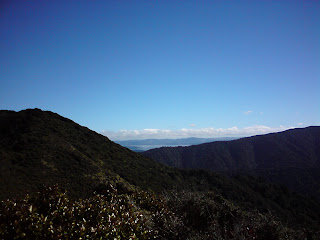 After a short break, it was back into the climb.

As we rose, the temperature got cooler and cooler. Despite the sun being out, the wind was whistling across the ridge we were climbing.  By the time we got to the top - the third or fourth "peak" we came to - I was freezing.  My shirt was sodden with sweat and the windchill was significant.  We briefly admired the view out towards Cape Palliser and north up the Wairarapa before finding a sheltered spot for a quick feed. 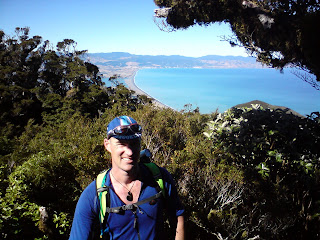 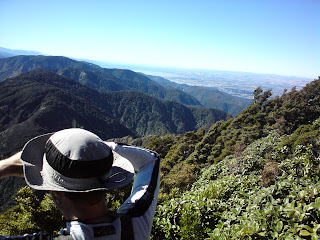 I left my jersey on for almost the entire descent.  It was incredibly steep and not at all pleasant travel.  It was nice not to have a bike to carry!  It took us about as long to get back to the stream as the climb had taken, although we enjoyed a few stops to eat and soak up the views west to the Orongorongo river. 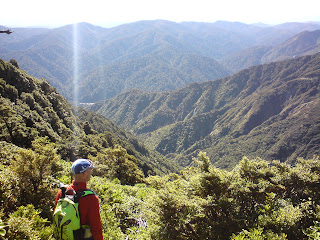 Once back in the stream bed, we had another opportunity to marvel at the incredible forces of nature, and reflect on how lucky we were not to be in this valley when the slip let go... 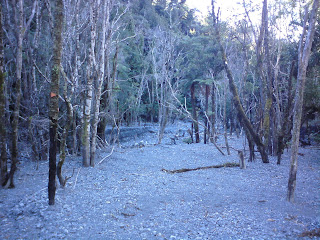 Once back at the river we agreed to run as far as the bridge.  This was probably the longest continuous run I've done in close to 15 years!  It looks like it was probably about 4km, and while it didn't feel at all natural, my body seemed to cope with it OK.  This time we stuck to the river bed, and it was nice to go blasting through the clear cold water sporadically, even though it made my shoes squelch.

We walked the steep climb at the start of the 5 Mile track but once it leveled off we started running again.  By this stage we were both feeling a little out of sorts as our muscles started to complain about this strange activity.  I became a bit self-conscious about my waddle, and once again wished for my bike.

We got back to the carpark about 5 hours 45 after leaving it - not a bad effort by all accounts.  Apparently the trip is about 23km, so knocking it out in that time probably isn't a bad effort for a couple of cyclists!  We made sure to spend a bit of time stretching before jumping into the car.  Compression tights on, it was a pretty quiet drive back to Wellington, whereupon we made for our respective couches and televisions.

While my legs are feeling a little on the troubled side 24 hours on, I'm pleased with one aspect of this activity.  My equipment maintenance is all but done - I dropped my wet shoes on the doorstep when I got home, and they're almost dry.  In contrast, my Brevet bike still needs cleaning!
Posted by sifter at 4:55 PM 1 comment: