Without a doubt, the highlight of my social activity in the last few years has been Friday night drinks at Revolution Bicycles.  Prioprietor Jonty Ritchie, famous for his purple socks, 6th place in the junior worlds back in the early nineties, high placings in NZ DH and XC races on the same bike and on consecutive days has long encouraged a fairly large and diverse group to congregate at his shop on Friday evenings.  Pizza, all manner of junky food and boutique beer have flowed over the years, and there's even been the occasional film night.  The conversation's always good, and sometimes there's even an opportunity to do a bit of work on bikes.  Conveniently for me, the shop's between work and home, and often lies between a stressful week, and a chilled weekend.

When Jonty called me on Thursday evening to make sure I knew about the 2010 edition of the shop ride, I was delighted.  Last year's had been a beauty, and so despite some pretty miserable weather, I turned up at the shop with bells on.  Jonty's is one of the few shops in Wellington I'm completely comfortable hanging out in in my Roadworks kit - he's got a great relationship with Oli, to the extent that they even appeared in a magazine together holding hands!

The invite had been "6 for 6:30" and I turned up with plenty of time for chit-chat.  I arrived with a six-pack of beer, and felt only slightly odd running the gauntlet that was the church cake-stall immediately outside the shop.  Alex was prepping his new Jamis race bike for the Rice Mountain Classic, and was yarning to yet another local legend, Geoffrey Notman.  Neither he nor Geoffrey were riding with us, Alex on account of the race, and Geoffrey on account of the conditions outdoors.

As time flew by, the shop started to fill, and the footpath outside was soon chocka with bikes.  The weather wasn't looking at all flash, but the evening was warm, so I opted for a sleeveless vest on top of my Roadworks race kit.  My Epic in bits, and my XTC sparking clean, my trusted Raleigh XXIX SS-29er was my weapon of choice. 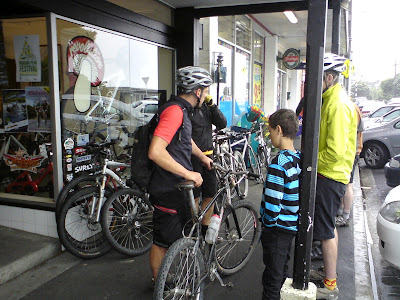 Jonty grabbed his bike and six of us followed him outside.  Another few, including Oli, stayed to mind the shop.  We were soon underway, the order of the night being to simply follow Jonty.  Before too long I'd surpassed that "goddamn it's good to get out" threshold, helped by the conversational pace, and the mild temperature. 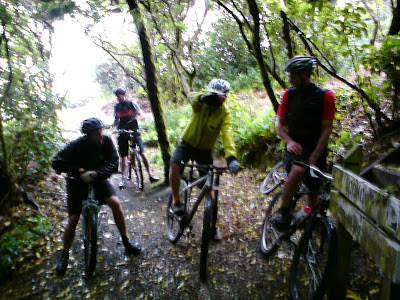 Things got a little sketchy from time to time, partly on account of running a minimal Stan's Crow out back, and a ever-so-slightly less minimal Raven up front, but mainly I was in the groove, and really enjoying the riding.  The company was great too, and frequent stops or walking sections were just as enjoyable as the riding itself. 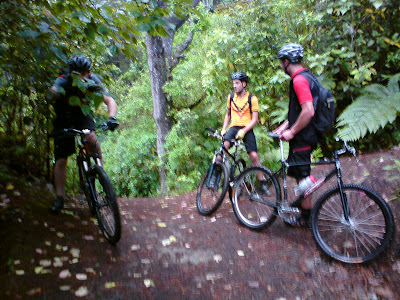 Having started out a group of seven, our number dwindled somewhat after about 30 minutes' riding.  A phone call went unanswered, but eventually a txt confirmed we were down to six.  Onwards we went, wet but warm.

Soon we were off road again, and the ride continued to be a joy.  I was riding mid-pack, enjoying the sweet scenery, and the fact that I was single-speeding in the rain, when all of a sudden I found myself stalled on a narrow bit of track.  I put the power down to try to recover some momentum on the reasonably steep gradient, but my rear wheel spun, and I was resigned to putting my foot down.

"Fuck, I didn't see this coming" flashed through my mind as I leapt down the cliff, desperately trying to find something to arrest my fall.  I'd had my weight on the downhill side of the track, but there'd been nowhere to put my foot.  I crashed through a couple of trees, and eventually my feet found solid ground.  My upper body kept going, and I came to a final halt upside down.  I quickly ran the usual post-crash diagnostics, and soon concluded all was not well.  "HELP" I shouted.  "HEEEELP"

I knew time was of the essence...  The ball of my humerus bone was sitting about 5cm lower than it should have been.  My third dislocation...


* * * * *
The first time I'd popped the shoulder I'd been riding alone on SWIGG at Makara Peak.  I'd seen the tree coming, and knew I was going to clip it, and as I picked myself up off the track I'd been bloody confused about the pain on my other side.  Turned out the handlebars had whipped around, pulling my left arm clean out of its socket.  The pain that time had been excruciating, and had worsened as the minutes passed.  I'd given my Epic to the first person who'd offered to take it, and about half an hour later (but what had seemed an eternity) I was at A&E.  I'd urged Jo to run red lights - she hadn't - and almost lost skin jumping out of the car before she'd come to a full halt outside the hospital.  I must have looked like I was about to faint, because the nurse at reception had appeared out of a secret door before I'd finished saying "I think I've dislocated my shoulder".  I screamed as they put me on a bed.

A second eternity later I was being prepped for a morphine drip in my right hand, and moved my chest left in a desperate attempt to ease the pain.  My arm fell off the bed, and as my arm arced forward, the shoulder rolled back into place.  I've been fascinated by my reaction to that ever since - I must have been well in shock by that time (probably an hour after the accident), yet with that simple motion, my world instantly returned to normal.  Pain, on the scale of one to ten, had been "fucking TEN", yet seconds later had eased to a dull ache.  My brain was also instantly back in charge, no longer trying to cut through the intense pain.  "I'm fine.  I can walk to xray" - all in all a remarkable transformation.

The second dislocation had come about a year later.   I was carrying a queen mattress up a narrow path when I lost control of it, and out the shoulder popped again.  Calmly, I'd leant over the adjacent hand-rail, and relaxed, letting my arm swing forward as it had done at A&E that first time.  Probably less than 10 seconds after the dislocation it was back in place, feeling a little achy, but otherwise fine...  That event had triggered an arthroscopy which had detected no major structural damage, and I'd decided to avoid surgery to tighten the ligaments, and to simply be a little more careful.  That had been fine for about 5 years, but here I was, wet and a little scraped up, desperately looking for a handrail.  Tick, tick, tick...

* * * * *
Luckily there had been a couple of guys behind me, and they got me quickly back up onto the track.  Fuck knows how I would have got up on my own.  I tried my magic trick using the handlebars of the nearest bike, but my forearm hit the wheel and it didn't work.  I could feel myself starting to panic.

I started walking up the track, in the direction I'd been riding a couple of minutes before.  I lay down on the track, and swung my arm down, but again it didn't work.  The outside bank was not sheer enough, and I couldn't both get the shoulder supported and give the arm the full ability to swing.  I asked one of the guys to support my shoulder, and swung my arm down again.  Again no good.  Perhaps I was trying too hard.  I needed the arm to swing - it was no good pulling it down.  Back off up the track...

Around the corner the others were waiting.  I suppose I babbled something at them.  They'd stopped just over a narrow bridge.  Perhaps my last opportunity before my muscles went into spasm, I laid down on the bridge.   I had five onlookers, probably wondering what the hell was going on.  I held my arm by my side, took a deep breath, and slowly relaxed it.  My hand arced forward.  I laid there, face down on the bridge, and breathed a sigh of relief.  Fuck...

The fellas had been awesome and the continued to take great care of me, the Christmas ride temporarily on pause.  The call went out to the waambulance, rather than the ambulance.  Despite being back in one piece, I was still wet to the skin, and there was no way anyone was going to let me try to ride anywhere.  Oli was soon on his way, and Simon agreed to wait with me.  It made little sense for the others to wait with us, so they bid us farewell and went on with the ride.

Another 10 minutes and I'd surely have been shivering, but soon I was sitting in the car, with Oli's own Roadworks jersey draped over my wet legs.  By the time the bikes were secured on the back, I'd managed to steam the windows up, but we were soon heading back to Jonty's shop to grab my keys and car.  Minutes later I was bundled into home, feeling like I'd gone a couple of rounds with a bear.  I thanked the guys, and they headed off.  A hot shower, a bit of food and some voltaren were high priority.   The only thing standing in my way was my skin tight, sodden lycra.  After what seemed like the third eternity of the night, I finally got the shirt over my good shoulder...

I had a couple of reasons to be relieved as I hit the sack.  I realised it was my very first crash ever that I hadn't thought on the way down "please let my bike be OK" - the beauty of riding a simple work-horse!  Insult to injury is a broken bike, but there was so little to break, nothing had.  Obviously getting the shoulder back in place in situ was also prominent in my mind.  I don't think I'll ever forget the agony I experienced during that first ride to hospital, and I was damn pleased to have avoided that.  First and foremost though was my relief at not having to phone Simon and Oli back.  They are the most wonderful friends, but asking them to come back to undress me would have been too much!
Posted by sifter at 6:47 PM 3 comments: