A Classic New Zealand Aorangi Crossing (from the vorb files)

The second half of this year's been a bit odd on the "training" front, and it's turned out the one race has been the training ride for the next. As a result, I've not really fired in races, and so I'd pretty much ruled out entering the Rice Mountain Classic. I'd love to give B grade a good crack in the future though. I've raced over the entire course, though not at once (Millers loop was the second half of Stage 2 in the 2 day tour that I did two years ago, and Kourarau and Admirals were Stage 4 of the same tour), and I really enjoyed it!

Moving on from Taupo a fortnight ago, and the Makara Peak Rally last week, I asked Simon what he thought I should do this weekend. An Akas loop was suggested, but when the cry for volunteers for Rice Mountain came out, I signed up for that and asked him to come up with something in the Wairarapa for me to do. The fall-back plan was to ride home over the Rimutakas. He ultimately suggested the Aorangi Crossing, described as "A classic from way back" in the newly released Seventh Edition of Classic New Zealand Mountain Bike Rides (sure enough, it was called the Haurangi Crossing in the first edition, copyright 1991)!

Volunteers had been asked to report to Gladstone Hall at 8am on Saturday. I'd toyed with camping over there on Friday, but in the end, my alarm went off in Karori at 5:45, and after some tea and toast, I jumped into my wagon, and after obsessively checking all the stuff I'd loaded into the boot the night before, I was off. I stopped for a very nice coffee and scone at Brown Oats (??) in Carterton, before heading out to the hall.

I had been allocated sag-wagon duties, but helped set out a couple of intersections before the start. I didn't do any driving until the second lap of Millers behind the A graders. The nicely staggered starts put them last on the road over Kourarou, and possibly Admirals. One of the riders punctured, and I tailed him for probably an hour! He was hauling at times! A few photos from the starts are here.

I didn't go up Admirals Hill, but returned the van, and shot off to Greytown for lunch with Scotty and psych. After some good food, and good conversation (including theorising about what could be so special about a small bag of muesli to make it worth $9.50), I ducked into the mensroom to fling my bib shorts on. Time to get riding. I had a short drive to Martinborough, where I parked up, and got my gear out of the boot. I was carrying a lot of stuff - about 5 bottles of fluid (1 on the bike, and 4 in a camelbak), 4 bananas, some bars and honey roasted peanuts, a largish first aid kit, a bunch of tools and spares, a Tojjarific light, and some spare clothes. My bag was bloody heavy, and I wondered how long before I wanted to ditch it (not long...).

The ride started on the road heading south(ish) out of Martinborough, then a left turn and about 15 minutes climbing on the road to White Rock. Then came about an hour of really good quality gravel road, which deteriorated straight after a DOC lodge, and ended abruptly at a carpark of sorts. According to the map, it was at about 500m elevation.

From here I dropped into a valley via a 4WD road. The bible described it as "a fast 4WD track", but frequent bogs, and encroaching vegetation meant I picked my way fairly sedately down. In the valley, the track crossed the river a bunch of times. Damn, the water was cold. My feet didn't get very wet, but one foot in particular took a long time to warm back up. Eventually I came to a fork in the track, and taking the right I found myself at Sutherlands hut after a minute or two... 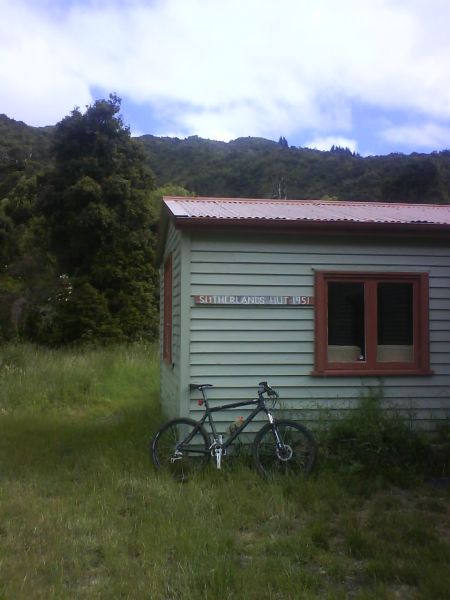 After recording my intentions in the log book, I backtracked, and began what the Bros describe as "the main obstacle of the ride... a teeth-gritting granny gear climb... often involving walking, sometimes defying gravity". They pretty much nailed the description, and I took almost exactly the one hour suggested. I didn't ride much, though occasionally I found a section that wasn't super steep or while it was super steep, wasn't littered with loose rock. I ended upside down, down a bank after miscalculating the firmness of a path around a big bog!

In parts the track was so steep I was kind of glad I hadn't come in the opposite direction (as planned for a northerly wind). I am sure the photos won't do it justice (down, out, up)... 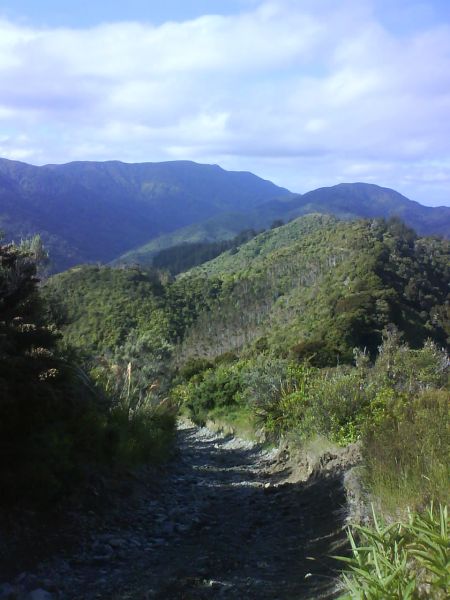 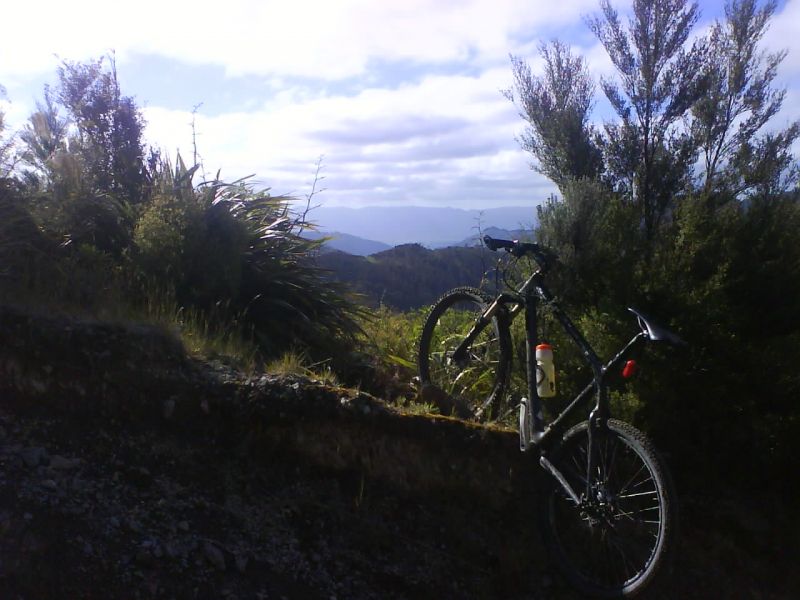 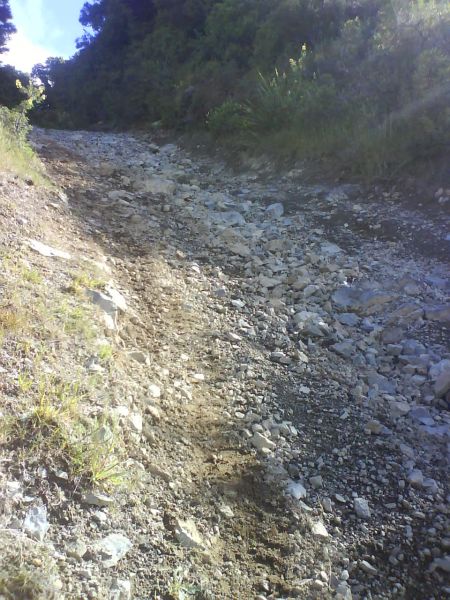 Soon after I took the photos, the track generally levelled off, though much of it was either steep down, or steep up. I think I managed to ride all the rest though. Cell coverage faded in and out, and apart from this, it was very cool to realise how remote this area is, and how lucky we are to have such an awesome opportunity to enjoy it. The views west were stunning. 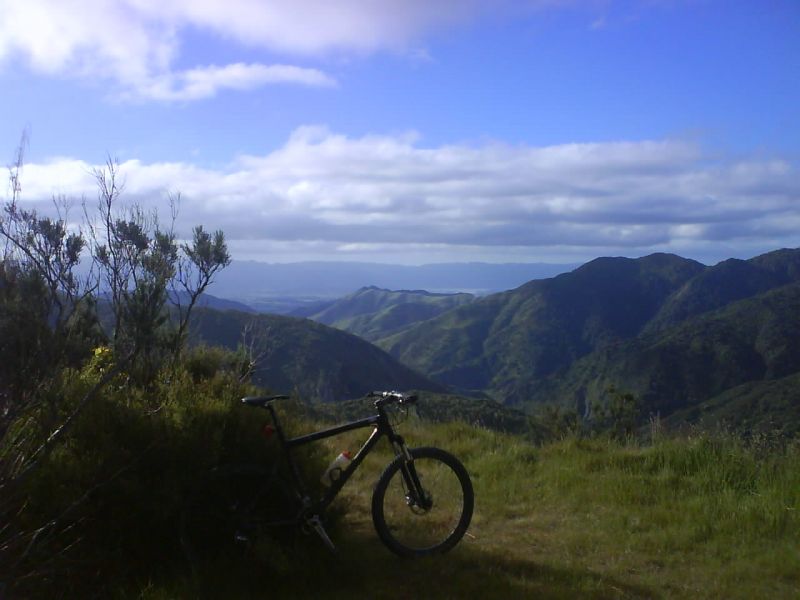 After a steep descent, and a very satisfying 10-12 minute climb out of Hurupi Stream, I took a short detour for a glimpse of the Putangirua Pinnacles of Brain Dead fame. It was worth it! I got to spend a few minutes on some singletrack, and the view was pretty neat! 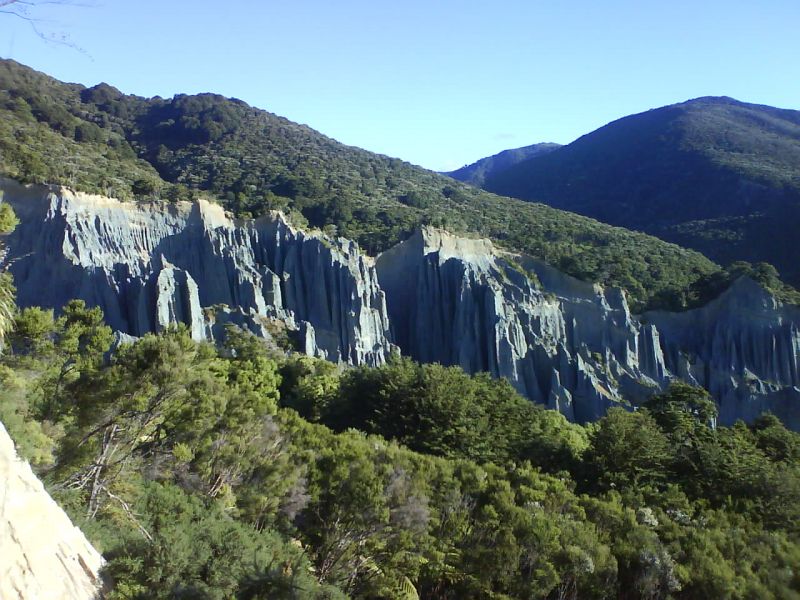 After admiring my last view of the south Wairarapa coast, 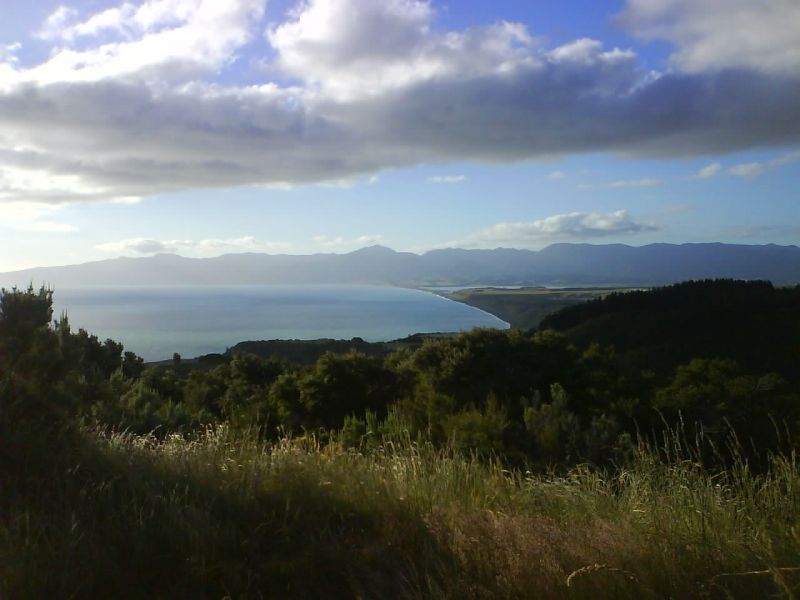 I found myself skirting around a large paddock. The track was rough, and I kept crossing some inch diameter water pipe. I decided to pop over into the paddock instead, and no sooner had I got underway than I heard the sound of many many hooves. I looked over my right shoulder, to see a few dozen cows about 15 m behind me. Figuring if I ignored them, they'd ignore me didn't work at all. They were getting closer, so I stopped and dismounted with my bike between them and me. Shouting "hah" at them (I think I was imitating the noise the cowboy in the movies makes when spurring on his horse - don't know why I'd choose that noise again...) had no effect, so I promptly got through the fence. No sooner had I lifted my bike over, but they came right to the fence, as if to say "and don't come back!" 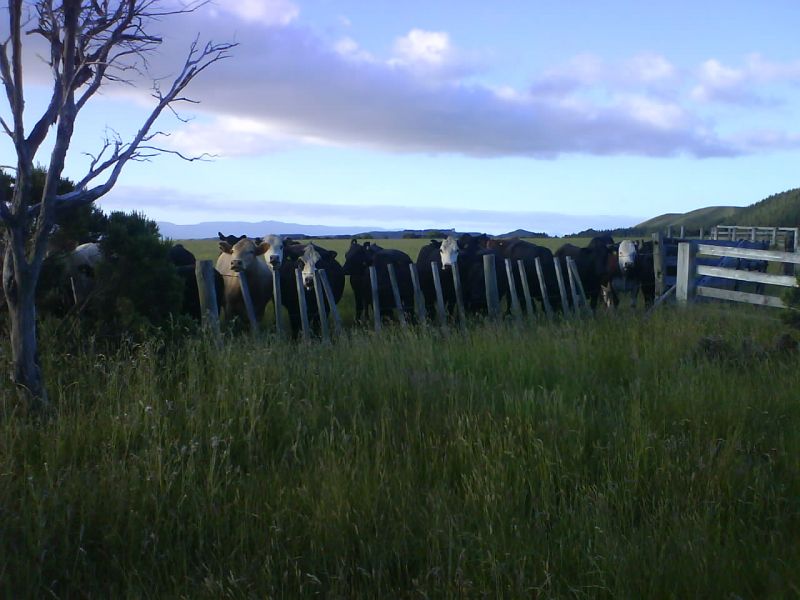 Feeling lucky to be alive, I rode quickly down to the coast, where a beautiful sight awaited. 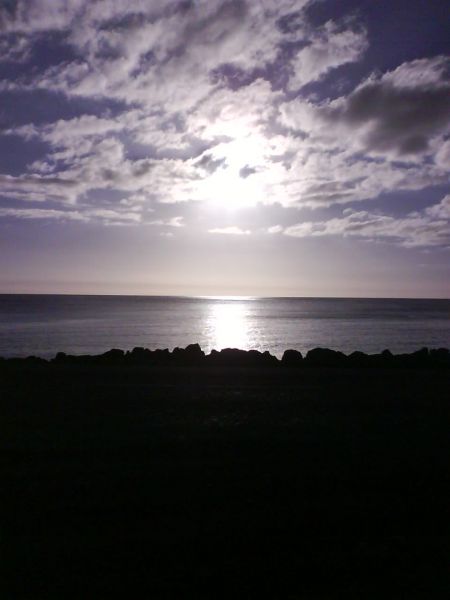 At this point, it was 7:30pm, 5 hours after I'd left the car in Martinborough. The remainder of the trip was on the road, so I put a lot more air into my horrible Hutchinson Piranha. I suppose Giant stocked their bikes with these on account of their weight, and because they'd roll around the carpark very well. They suck!

It took me just over two hours to get back to the car. I stopped three times I think, each time having something to eat. By the time I got back to the car, I'd added a merino vest under my riding shirt, my trusty Roadworks armwarmers, some knee warmers, and my helmet light. It was very nice to get some weight out of my back pack! It was great to finally get some feedback on the distance remaining at the turnoff to Featherston! Only 18km to go, and it was 8:58pm. I whiled away some of these kilometres thinking about how long it might take at various speeds, and I thought a lot about what it must have been like for Simon on his incredible Great Divide Race. Here I was at the end of a 100km day, and all I wanted to do was stop. I felt like a bit of a blouse to tell the truth. In the end the 18km took me about 40 minutes, so about 26km/h. Not too bad on an MTB, at the end of a 7 hour ride!

I was thrilled to find the fish'n'chip shop about 50m from the car open at 9:40 at night. While they cooked my dinner, I loaded my gear into the car! I was home and in bed just before midnight, well rooted, but glad for a sweet day with plenty of cycling!


Originally published on vorb
Posted by sifter at 9:05 PM