Biking (from the vorb files)

Managed to get out on a few rides in the last few days. In fact, in the last four days I've ridden four different bikes. Friday was my bog-standard commute to and from the end of Lambton Quay, on my trusty commuter bike.

On Saturday, I popped my Raleigh 29er single speed on the back of my new bike carrying wagon, and drove out to Eastbourne with my girlfriend Carly. We had a decent northerly behind us and made quick work of the ride out to the lighthouse. Unfortunately Carly resisted all my taunts about racing etc, and so I had to be grown up for the large part. We sat for a bit at the lighthouse, and did a little bit of poking around, collecting a couple of neat pebbles - half greywacke, and half quartz (or something white and hard...). We then saddled up again, and rode a wee way towards Baring Head, before taking the first left hand 4WD road. After a couple of gates, we headed left again, then gradually climbed up a wee valley on to the ridge above the bottom lighthouse. Turning left, there are a few pinch climbs before you reach the second Pencarrow Lighthouse, and if you can stand up in the wind, some stunning views across the sounds, and of Wellington Harbour. 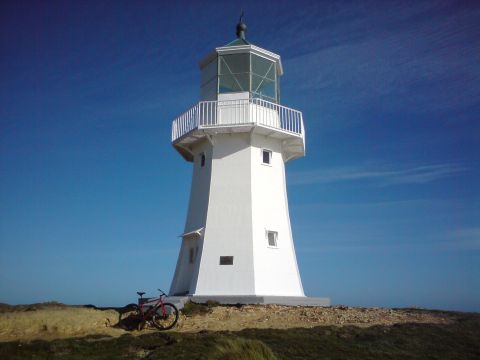 Instead of returning down the 4WD road, we took a funky little singletrack which ended up getting pretty steep and rocky. Carly was on foot, and coped with it admirably, while my big wheels lapped it up. We then popped down a steep bit of singletrack back to the coast. From there it was a bit of a grovel into the headwind back to the car. I was on point, and Carly sheltered behind me, only a couple of times silently popping off the back.

We followed the ride up with a coffee and some stunning caramel slice at the [insert name with Chocolate in it] cafe, just before Days Bay.

I hadn't intended to ride the PNP race on Sunday, but the opportunity arose, so I dusted some Long Gully (MTBO) mud off the Epic, gave the chain some lube, and put a bit of fresh air in the tyres. It was quite a luxury being able to walk to the race venue to register, then pop back home for a couple more slices of toast. The race itself was less luxurious. My lack of a decent warm up had me in the hurt box soon after the start, and lack of mountain biking was apparent when we hit the singletrack. Nonetheless, it was great to be out, and I was enjoying the ride. Karl Ratahi passed me at the top of Nikau, signalling the first of the Vet 2 men. Matt Farrar wasn't far behind, and my old mate Simon caught and passed me in between Missing Link and Aratihi. It was nice to see he was working very hard. I hung onto Mike Thompson's wheel up Aratihi, until he slipped on a rock, and we almost both ended up in a pile on the ground. He repassed me on T3, where I rode like a complete muppet, including taking a dive off the swingbridge which I rode on to far too half-heartedly to make it stick...

It was nice to be back on firm terrain again with Zac's track, but my muppetry came back on Ridgeline, and at the top of the descent into the wee saddle before the climb to the high point, I went down. Kerei Thompson pointed out it wasn't a good time for a rest as he blasted past. I was still out of sorts when I hit the climb, and shifted under load into my biggest cog at the back, and had a complete loss of power. I had a momentary flashback to the last times I'd ridden the Epic... *fall off and step on rear wheel at Belmont, run out of time to see Oli before Long Gully, derailleur hitting spokes in Long Gully race, conclude bent dropout still* I really do shake my head at myself when I've failed to take advantage of Oli's considerable skills. I've had so many bad experiences with repairs around Wellington in my time as a cyclist, with the exception of Oli, it's very hard to go past him... Lesson learnt... What a mong I am, not making the most of priority service of such quality...

Anyway, at least I was at the top of the hill. I shoved the chain in my back pocket, and rolled down the hill. It was quite fun, focussing on maintaining momentum. A couple of times I really needed that chain, but managed to get out of most spots without bloodshed. Ridgeline Extension was slower, but I wanted yet another race finish under less than ideal conditions, so I turned down ryda's kind offer of a bike. 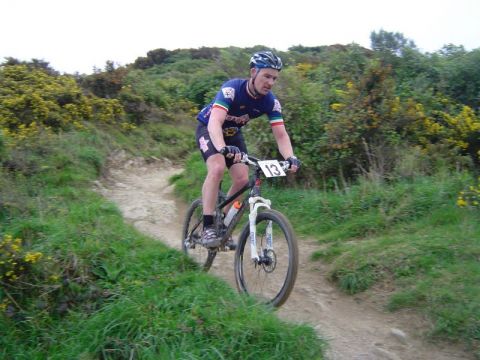 Before long, I was pushing my bike up the small rise in South Karori Rd for the second time during a PNP race. The first time I was rather seriously blown, and struggled to stand up when I finished... This time, my legs were fine. Stu Houltham looked at me rolling down the road at about 25km/h in a full-on tuck as if I was a bit weird... I lost about 5 or 6 places on the road section, and it was nice to finish.

Today, I worked from home, and by the time 3pm rolled around, I'd made good progress on my work, and the sun was out, so I treated myself to a ride on the Roubaix. It is so lovely and light, and it was a pure pleasure to ride it through Makara, Takarau Gorge and up to the intersection of Ohariu Rd and Ironside Rd. There, I turned around and rode back home. 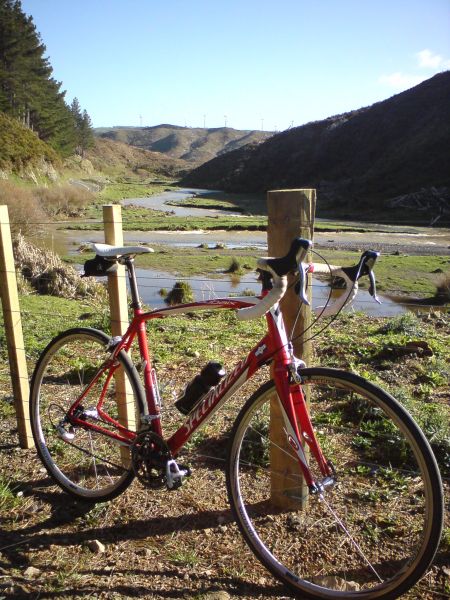 It was a rare sort of ride for me - not often I go out on my own and sift... As always, it was bloody good to get out.
Originally published on vorb
Posted by sifter at 10:31 PM