Today was my first start in Scratch for the season. After last week, it seemed like the right place to be though.

I woke up with a sore throat, surely nothing to do with the beers last night, but a strange resurgence of my cold. I was thirsty as all hell, so probably due mainly to dehydration. I woke at about 9, and was out of the house by 10, starting the day with the customary peanut butter and red plum jam toast and a HUGE cup of tea. Rather than ride to the race this week, I was in the car, and hooked up with my Mum and Dad in town for a bit, before picking up the bike from my office.

Oli had been more than a little disgusted last Friday when I took it in for a gear tune, and I left it with him this Monday. When I picked it up on Friday, things that I'd been accustomed to seeing in a shade of black were this weird silvery colour: chain, cassette, etc etc. The bike was literally gleaming.

I got to registration nice and early, and decided to do a lap of the course, backwards. It was a beautiful calm day, and I rolled around the top of the peninsula in baggie shorts and t-shirt. After climbing Awa Rd the wrong way, and riding up Darlington Rd, I felt my rear wheel moving around strangely, and realised I had a puncture - of a brand new tube nonetheless. Luckily, I had a tyre lever, pump, and spare. It was a little nervewracking pumping the tyre up as I couldn't find anything stuck in the tyre. I always much prefer to find a big chunk of glass to remove. Anyway, it held pressure back to the start line, and beyond. Thanks to Perry for loaning me a spare tube for the race! We joked that he'd slipped his timing chip in there!

Safety margins were off the menu today, so first across the line was going to win. This was a new course, and the first lap was a little confused at times. An uncharacteristically slow roll out was due to traffic, and then a couple of riders went straight through the roundabout at Miramar North Rd instead of left. The bunch, in gentlemanly fashion, eased off a bit to let them back on.

The roads around the top of the peninsula were tight, but uneventful, though the first climb up Awa Rd hurt a lot. It was short, but I really struggled to find the right gear, and I seem to be reluctant to do much riding out of the saddle. At the bottom of the hill on the other side, I was gapped , and so my Mum and Aunty got to cheer for me while I desperately tried to get back on. That lap, and the next one, and the one after that. I'm not sure what went wrong each time, but I think I'm not riding aggressively enough through and out of the corners. Luckily, the road around Karaka Bay was pretty narrow, and things slowed off a bit.

On the second lap through there, we got stuck behind a woman who didn't really know what to do with us. Eventually she slowed and pulled over, and the bunch made its was safely past.

We'd passed a few solo riders before the start of the third lap, but it wasn't until the top of the first pinch climb at Miramar North that we saw a large bunch ahead. We passed them on the second half of Awa Rd after being impeded by a bus on the flat section before. I got stuck on the wrong side of the bunch, but managed to find away through the middle and out the side, and was able to keep touch to the top, before getting gapped for the third time on the descent. I worked damn hard to get back on, and was told afterwards by a Break 2 starter that there was absolutely no point me wiggling my elbow at him! :D

We were now a bunch consisting of Scratch, Break, and some Break 2 riders. Coming through Shelly Bay, some guys I didn't recognise have things a little rark up. When we made our way through the cutting, and started the Maupuia climb, we were confronted by a huge bunch, presumably the remnants Breaks 3 and 4, and Limit. While I'd felt shitty on Awa Rd, my legs seemed OK on the bottom climb, though I had to work pretty hard to get back onto the fastest group (leading is a bit of a stretch here as there were riders everywhere) before the descent and flat section leading to the final climb. Again, I was able to mash away when the road tilted up again, and slowly but surely picked off riders.

About a few hundred to go, I passed Lee Evans, who had worked very hard today, especially into the wind along Shelly Bay, and Darlington Road. There were a few riders ahead of me, but I was going as fast as I could, and so just focussed on transferring power to the pedals. Mum and Pam were there on the hill, so was Simon, and finally Oli at the finish line. About 15m out I heard a clunk behind me, and managed to squirt out a little sprint to hold off a fast-finishing Lee Evans. As always, it was a fantastic relief to finish, and nice to be at the front end of the field.

Cheers to the PNP club for putting on an excellent series. After last year's nightmarish BP1 (crash + timing cock up), this series went incredibly smoothly, and it was a pleasure to take part!

Finally, thanks once again to my generous sponsor, Oli Brooke-White at Roadworks Bicycle Repairs for his wonderful support, on and off the bike, and to my inspirational friend, Simon Kennett for his mentoring. 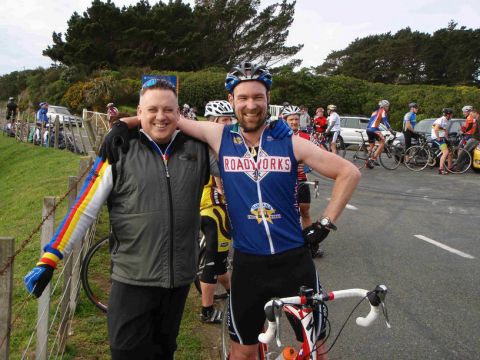 Originally posted on vorb
Posted by sifter at 8:22 PM