I was given my first copy of the Kennett Bros' Classic New Zealand Mountain Bike Rides back in 1999 by my friends Mike and Linn. Since that third edition, I've managed to get the whole set, completed by sourcing a first edition from trademe. (Fancy selling a gem like that!) These books make inspirational reading, and a ride that had leapt out at me during one of my sessions with the book was “Tree Trunk Gorge”. Since reading about it in “the book”, I've driven past Tree Trunk Gorge Road a fair few times, usually with a bike on the back, but never with the time to do this ride.

On December 28, I had the 42nd Traverse marked down in my diary. My shoulder blip a couple of weeks earlier had added a whopping great question mark next to it though.  My physio had strongly advised against doing the ride, but more than my physical health was at stake, so instead I made sure my shoulder had as good a chance as possible to be right for the ride. I even turned down a pretty sweet offer for a lunch-time MTB ride in favour of a lap of the bays with the Freyberg bunch. My shoulder felt pretty stable on that ride, and I was able to release a fair bit of pent up energy on the unsuspecting bunch.

When the 28th dawned, it was an absolute shocker. Steve, Ash, my bro Dave, Simon and I had stayed the night in Rangataua, near Ohakune, but when we woke up, the storm conditions were so bad that the house had no power. Luckily we had gas, so were able to at least have a hot drink to wash down our muesli and sandwiches! All the careful prep on the Raurimu topo-map using my out-of-print Tongariro Forest Map was for nought. There'd be no way we'd be able to cross the Waione Stream, and pretty much the entire route would be exposed to some heinous weather. We had good incentive to come up with an alternative though, with 5 Wellingtonians away from home, and three very new bikes – including my yet-to-go-offroad Turner Flux. In the end, we didn't even have to consult the book; Simon mooted the idea of doing Tree Trunk Gorge, and within moments there were five bikes on the back of Steve's wagon, and 5 eager riders suited up inside!

The drive passed quickly with some classic Kiwi sounds on the stereo – somehow fitting for a Classic New Zealand Mountain Bike Ride, complete with “picturesque river fords” and “beautiful native forest single track”, not to mention “THE PILLARS OF HERRRCUUULEEEEES!” The drive down Tree Trunk Gorge Road was mildly alarming – the drains were full to overflowing and there was a hell of a lot of water running down the road. Hmmm...

By the time we had the bikes unloaded, our rain gear was well on the way to being overwhelmed. We gathered on the Tongariro River Gorge bridge and admired the raging torrent below. Those picturesque fords were going to be entertaining...

After a bit of road riding, we turned into our first bit of sweet track. My bro, a relative novice, was with us, and he and I took up the rear. I could barely contain myself as I blasted down the single track, keen to put my new steed through its paces, but similarly keen not to crash.
Before too long we were all standing beside a fairly swollen stream, probably about 5m wide. We could see the track resuming about 15m upstream. Steve and I made like two-thirds of a rugby front-row and made our way slowly into the current. Probably no more than a metre from the shore it was clear that there was no way in hell we were going to be able to cross this bad-boy. Five with fully loaded tramping packs arm in arm might have had a chance, but five with bikes were stuffed. Riding back up to the car was looking like a possibility.

We started to look for alternatives. Fortunately, we found a likely one about 20m downstream – a fallen tree was looking suspiciously like a bridge! Steve checked it out, and before long was on the other side, bare-foot and calling us across.
If anything, carrying a bike across the log made it easier, with it providing a nice counterweight. The last few metres (the base of the tree) were hellishly slippery, and so we passed the bikes to Steve before gingerly negotiating the last bit. Soon, we were all across, massive smiles on our dials!  Ride back on!!

Next hurdle was to get out of the stream bed. Luckily bikes are long, and without too much drama we soon had them atop the 4 metre bank standing between us and more sweet single track.

It was still pissing down, but it didn't stop us messing around taking photos and generally having a blast! We had a steep and fairly technical climb to get out of the stream-valley which had the legs screaming for mercy well before it was over. I think we all succumbed at some point, but it didn't put us off our fun!

More sweet, and seriously wet track followed, and as we cruised along, we looked like a pack of M&Ms in our coats. 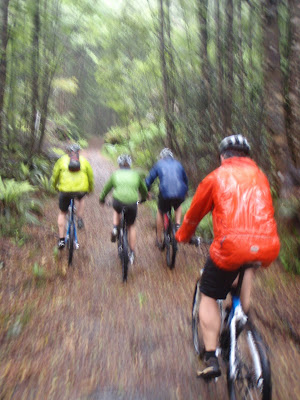 The riding just got better and better, and we enjoyed a great descent, complete with some pretty dodgy drains. Thoughts of crashing were now well lost to me as the joy of riding fantastic track in excellent company and shocking conditions became all-encompassing. I'd tried to get Dave out on my Turner, but Simon's concern for my shoulder had me on the super-bike, and Dave on my race-rig, complete with slick tyres. He seemed to be having a blast nonetheless, and was never too far behind us.

Steve put on a great show after a Deliverance-like stream crossing. The current wasn't too bad, but a rooty step-up was followed by an unfortunately placed boulder. Steve dealt to the roots with aplomb, but didn't fare so well on the slippery rock, and with Simon up the track, camera at the ready, we all watched Steve tip over the side and settle upside down just to the side of the stream. Luckily he bounces much better than I do, and with all limbs correctly accounted for, we were soon underway again.

The singletrack was soon broken up by a short bit of gravel road. Simon made the comment about the next bit being his favourite, which floored me somewhat – the stuff we'd ridden so far had been awesome.


The track certainly took on a different style though, and got tighter and more technical. Hoots of delight echoed through the valley as we blasted our way down towards the PIIIILLLLLLAAAAARRSS OF HEEEERRRRRCCUUULLEEEEEEEES! There wasn't much to see actually, but it was fun calling out the name, and the view down to the swollen river from the swing bridge was impressive.

The sign suggested riding the bridge was inappropriate, but disregarding probably very sensible advice seemed to be the order of the day. Steve went first, and I followed, with Ash immediately behind me. All was going well until about half way across, when all of a sudden I seemed unable to hold my front wheel in a straight line. And so, I wibbled and wobbled my way across the last bit, curious as to what the hell was going on that I couldn't see, but my bike was surely reacting to. Ash also succumbed to these funky harmonics, but Simon (last across) had no problem. A fun little unsolved mystery!

The next section was the worst bit of riding we faced for the day. The track was pretty overgrown, and every bit of manuka that we couldn't quite duck was heavily laden with rain, even after Steve had taken a big hit for the team on point. To boot, there was a lot of water running down the track, and things were pretty sketchy in places. Trying to negotiate uneven and slippery track while ducking wet branches is not as simple as it sounds!

The sound of the traffic on SH1 got louder and louder, until finally we popped out in a clearing just a couple of kilometres from the Tree Trunk Gorge Road intersection. After a quick breather, and some curious glances from passing motorists, we headed off up the road. I was keen to get this narrow stretch in traffic over and done with, so put the hammer down. I could hear Simon behind me on the climb, my legs and lungs were burning, and all was good in the world.

We soon made the left turn which would take us back to the car. The rain had eased a little, and there was slightly less surface water than there had been two hours earlier. Despite being drenched, we were remarkably clean, as were our steeds. We soon got the bikes loaded up, and got some dry gear on. It was odd seeing a couple of female tourists in summer dresses popping out of their car for some photos of the river below the bridge. They must have driven a long, long way – the sun sure wasn't shining in this neck of the woods! 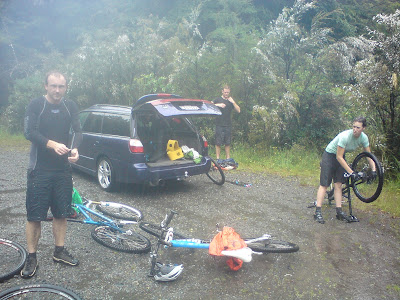 The drive back to Rangataua was sweet, and all five of us had that lovely after-glow that follows a fantastic ride. This particular ride featured some great riding, somehow enhanced by the foul weather. While wet, we'd been really sheltered from the wind, and it hadn't been that cold. Our motley crew had never been out together, but we had all clicked, and whooped and hollered! The native bush had indeed been lovely, and everyone had been so damn into it, we'd truly managed a Classic!

Thanks to Simon for most of the photos.  A couple of his gems are bound for the 8th edition of Classic New Zealand Mountain Bike Rides, due instore in November 2011!

Postscript (December 2011):  Jo and I did this ride from the Pillars of Hercules end.  We parked off Kaimanawa Road, and rode through to Tree Trunk Gorge, before returning to the Pillars of Hercules as it's written up above.  We avoided the nasty SH1 section, and maximised our time on sweet, sweet track!  Recommended!
Posted by sifter at 10:47 AM