My events of the season are now only about a month away - the Akatarawa Attack on the 31st of January, an 8 hour MTB rogaine, and the Kiwi Brevet, an 1100km randonee, starting on Saturday 6 February. Both will involve plenty of climbing, and both will test my endurance. Consequently, when Simon invited me up to Rangataua (near Ohakune) for a few days with the possibility of some reps on the Turoa skifield road, I was keen as!

Simon had done three reps in preparation for the Great Divide Race back in 2008, and our plan was to repeat this session. I'd admitted to my generous sponsor, Oli Brooke-White of Roadworks fame, that I was pretty keen to have a crack at four. I'm not at all sure why. I don't think there's anything inherently wrong with the number three. Perhaps I thought that with company, such a silly notion could be put into action. It wasn't to be...

I drove north from Wellington on the evening of Boxing Day. Sarah, Simon's wife had left Rangataua earlier in the afternoon, and was riding to Hunterville on some of the back roads and I was to meet her there. There was bugger all traffic on the roads, so I had time for a coffee and a browse at the 4 Square before meeting Sarah and loading her bike on the back of the car. It was good to have her company on the rest of the drive, and she was pleased for the sandwich and coke I had waiting for her.

The next morning Simon and I were ready to hit the road just after 8am. We cruised down Dreadnought Rd which runs parallel with the highway and connects Rangataua to Ohakune. Simon stashed a second bottle in the bushes near the ranger's station, and we rationalised our clothing for the climb. We started at a pace we'd hope to continue, and rode steadily along, sometimes side by side, sometimes in single file. Unlike our Mt Vic sessions, conversation was minimal - this was business, not pleasure.

The road kicks up nastily after a few kilometres before easing again. Something like a third of the 1000m climb comes in the first half distance-wise, with about 500m gained in the last few kilometres of the 16km road. There wasn't much traffic, and we enjoyed the bush - the tall trees disappeared someway up the climb, and further on the bush vanished too to leave tussock. At the top, I stopped the timer at 68.46 and with the cumulative ascent on exactly 1000m. We put jackets on and then bombed down the hill. On a steep straight section I rocketed away from Simon, using my mass and a good tuck to excellent effect. He got his own back and dropped me on a flatter section which he was able to ride on his aero bars.

After a quick loo stop at the bottom, we were into it again. As with the first climb, the hour passed reasonably quickly. The (rapid) passing of time is one thing I've really noticed has changed for me with all this riding - particularly useful on long drives or plane trips...!

Simon had wagered on a climb of 69:30, while I'd gone with 68:30. With the benefit of the time on my stem and not his, I did a go-slow through the top carpark, and miraculously pressed the lap button at exactly 68:30. We were a few dozen metres short of the top though, and when we finally reached that, the next lap read 17 seconds - the second climb had been a whopping two seconds longer than the first! Photography is always an excellent recovery tactic, and so amongst muesli bars and water from the bottle, I managed to snatch this wee beauty! 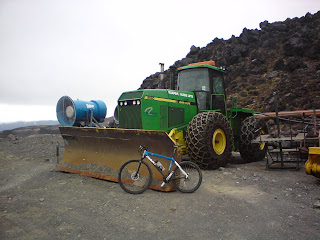 I was a bit more proactive with my tuck, and held it longer on the second descent and managed a high-speed of 81.95km/h. Even these were taking us a good 20 minutes, hammering home how long this climb really is. The third started off very well, and we ticked along nicely for the first half. Once the road really kicked up though, my legs started to complain. By the end of the second ascent, we climbed the equivalent of 11 times up Mt Vic, and we'd be at a little over 16 by this final summit. So, it was no surprise really. It was hard to stay out of the small chainring on the MTBs, but this unspoken restriction was adhered to! By the really steep stuff, I was uttering obscenities and was zig-zagging all over the road. At one point, Simon slipped on some gravel, and I heard him unclip behind me as his bike stalled. At the top, I felt really really sick, and was relieved to have stopped. My lungs were fine, but my legs had really struggled for power in those last few kilometres. Our final time was 72:28, 3:40 slower than the second.

It's hard to spot exactly where that time was lost, but I bet it was in the last bit! We rolled back down the hill, and met Sarah, Miro and Shona who were just at the end of their picnic. We gladly accepted their offer of a lift home (note the steady descent from Rangataua at the start of the altitude graph). We had a quiet afternoon, though were both up for a walk the next day.

The ride was very hard, although up until 12km up the third ascent it had been very manageable. The last bit made a huge difference to my overall impression of it though. A fourth ascent didn't even cross my mind! In total, the ride was just over 102km, with total ascent of just over 3000m. A tough ride in anyone's language.