Sunday morning came pretty quickly, with the alarm going off at 5am. There was no sign of any action from Simon, so it wasn't until 5:30 that I scraped myself out of bed.  After a quick bite to eat, it was time to pack up and go. Being the first morning, it was a little difficult to know quite what to do and in what order, but despite that, this was our quickest departure.
The roll down Maitai Valley didn't take too long, and soon we were making our first call in, from the steps by the cathedral.  After a convoluted series of turns, we were heading west towards the old rail trail and bound for Richmond.  The cycle path was easy riding, although some sections were difficult to pick up.  At one stage I'm sure I put us wrong as we crossed a couple of roads and used an underpass only to bring us back to almost where we started from.
We reached the roundabout at Champion Road just after 7am, and just after the bakery there had opened.  Breakfast time!  I packed away some food inside, and some in my pockets, and refilled my drink bottles.  Then we set off up Champion Road before making the turn into Hill Street. Sadly, it lived up to its name, with a couple of short but steep climbs in it.  We headed back towards the main road to cross a river, and then immediately turned left to do a loop through Wairoa Gorge.
Soon after the turnoff we caught Chris and Bob.  They'd stayed at their place in Richmond, and had woken to find about a dozen other riders there!  It was cool to hear about what some of the others were up to.  Shortly after we left them, we caught up to Tim Mulliner.  I'd given him his SPOT the day before, and while the name seemed familiar then, it wasn't until later in the day that I'd remembered why I knew his name - I'd read his book!  Back in 2001 Tim had started a 24,115km ride from Europe back to New Zealand, described in Long Ride for a Pie.  We got to chatting, and enjoyed knocking out the miles side by side.
At a rather sketchy turn onto Pig Valley Rd, we soon passed a small car sitting in the stream-bed.  It looked in good shape, was upright, and there was no sign of any inhabitants.  It also had a fluoro sticker on its roof.  We joked about it saying "you have parked your car in an inappropriate place.  If you do not remove it within 24 hours it will be towed at your expense..."
Just down the road we rejoined the highway, but not before I pulled in for another fuel stop.  By the time I was eating, there was quite a group there:  Simon, Laurence and Guy of Ground Effect fame, and also Jasper on his singlespeed, and Darren on his skinny-tyred touring bike.  We were joined by the local constabulary, who we informed about the car in the ditch! 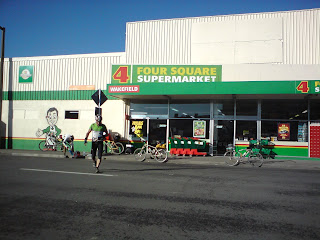 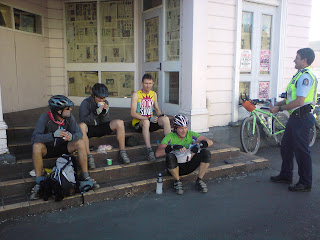 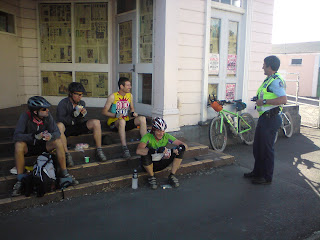 After a few minutes it was time to get rolling again - my legs had only just warmed up, and I didn't want to go through the slow process of getting them warm again.  I saw Tim on and off on the ride up to St Arnaud.  The day was sunny, but thankfully not as hot as Day 1.  I'd ridden down from St Arnaud, although not through Eighty Eight Valley Road with my bro a couple of years before, and enjoyed my fond memories of that trip.  As always, doing something in the opposite direction doesn't always coincide with recollections, and there were a few hills present where they shouldn't have been, and one or two missing!  By the time I reached St Arnaud, I was ready for lunch.  I ordered a good looking bit of pizza and some coffee, and tucked a bit of brownie in my pocket for later.  There was plenty of water on offer, and it was nice to sit with a growing group under the shade of an umbrella. 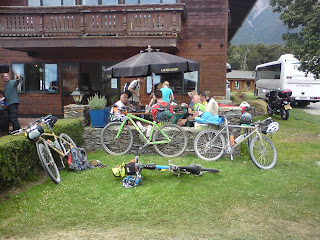 By the time I was ready to set off, Simon, Darren and Jasper had arrived, as well as Andrew.  It was nice to see him for the first time since early in the morning.  He hadn't looked particularly well the night before, but he was clearly managing to knock out the miles!
The turnoff towards the Porika Track took much longer than I had expected.  I was running off my memory to this point, having spent some time copying the google map version of the course to mapmyride before uploading it to my now marginalised GPS unit.  The stretch from St Arnaud to the turnoff was very simple, and so I'd obviously had a massive scale when plotting it.  I'm sure it was only a few inches on the screen!
Tim and I ended up riding together again, and it took us a long long time to catch Jasper on his singlespeed.
The Porika Track was a good solid climb which I was very happy to ride all of.  I probably should have walked some sections, but with every little technical steep section I made it through, my desire to stay on the bike grew.  The climb took a long time, and it was hot, so I had removed my cap and zipped down my shirt.  After a bit of faffing around at the top, including passing a sign permitting Gold Fossicking (with the appropriate sized pick and pan).  The descent was gnarly, and I thought rougher than the Maungatapu.  One section was so steep I was considered walking, and when I saw the view off to the left of the track was sold! 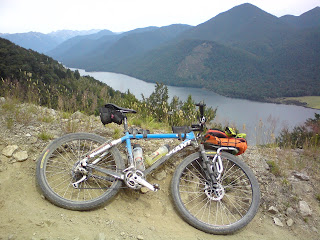 After briefly admiring Lake Rotoroa in all its glory, I continued my rough descent.  By the bottom my brakes were squealing wildly, and my rear brake lever was almost at the handlebar.  As I rode on, trying to keep off the brakes as much as possible, I started running through options for replacing the brake pads.
I'd expected to go straight into Murchison, but had completely forgotten about the Braeburn Track.  No matter - I was soon reminded, and got into the business of getting to the top of it.  Once there, I was greeted by the most amazing section of gravel road I have ever ridden.  Imagine a smooth and perfectly cambered road winding downhill through native bush.  It seemed that every time I was nearing a corner and beginning to consider braking, the sight line would open up and I'd realise that I could carry my speed through the turn.  The gradient was perfect - steep enough to enjoy a great downhill, but not so steep that it became overwhelming at all.
At the bottom, I turned onto yet another gravel road.  After a while I was picked up by Tim, and once again we rode together.  I was pleased to discover that my brake had come back to life.  Presumably things had got a bit hot in there, but now all was well!
Before long we were in Murchison.  We parked up by the Four Square just as a couple were leaving - Anne and Phil (although I "remembered" Anne as Tina, much to everyone's confusion...).  Simon arrived soon after, and we made our way to a diner, saving the cafe around the corner for dessert.
Simon ordered first, choosing scrambled eggs and spaghetti on toast.  Eggs on toast were on the menu at $8, as was spaghetti or baked beans on toast, also at $8.  The waitress ummed and ahhed and then decided the combo would be $10 (for Simon).  Tim ordered next, and I followed him, choosing beans and eggs on toast.  The waitress must not have liked the look of me, or had taken pity on Simon's emaciated form, for my meal was $14.  I was too shocked, and far too polite to say anything, to her at least.  I brought it up many times to Simon over the next few days!
After polishing the plates of food off, and when Tim had finally received his iced chocolate (Simon and I had both had chocolate milk from the fridge much to Tim's disgust), we retired to the somewhat more upmarket cafe around the corner.  I got a head start as Simon still had some grocery shopping to do, and tucked into a coffee, and a bit of slice.  Darren was in there resting up, as were Chris and Bob, and we were soon joined by Andrew.
Eventually it was time to head off again.  We were straight into a gravel road section, and Tim, Simon and I got a bit of a pace line going.  Towards the end of it Simon commented about my surging.  Without a speedo, it's incredibly hard to tell what speed you're doing, especially when you go from being sheltered behind a rider to out in front.  You end up pedalling harder, and it's really hard to judge how fast you're going.  I think we were basically knocking out 30km/h consistently with my turns being a few clicks faster.  It's amazing what a good feed'll do for the legs!
The route got a little fiddly as we crossed over a bridge and then looped back to find the bottom of the Maruia Saddle climb.  This was another beautiful climb, and we knocked it out in fairly short order. 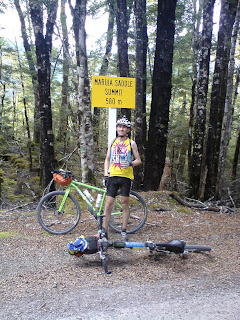 I must have been pretty tired at the top, because I have absolutely no recollection of the descent.  It did end in a bit of open paddock though, before spitting us out onto SH65.  It was getting dark by now, and when we finally reached the turnoff to West Bank Rd, Tim announced he was calling it a night, and pulled off to set up camp.  Simon and I proceeded along the gravel road, eventually stopping to set up lights, and enjoying a couple of short walks up some of the steeper pinches.
We made it into Springs Junction just after 10pm, after setting off just after 6am in the morning!  We had a bite to eat (that we'd carried from Murchison), and I made myself some instant coffee to put in the fridge for the morning.  Rushing to get out the door and hot drinks simply don't mix.
After a nice hot shower, and little bit of short rinsing, it was time for bed, and another well deserved, though short, sleep!
Posted by sifter at 5:14 PM