Anatomy of a photo, and a bit of history

Just over a fortnight ago, I clicked through to a story about my dear friend and sponsor, Oli Brooke-White on velominati.com.  Written by Brett, a local cyclist and bike-shop-dude who I both know and respect, I found the original piece a bit hard to stomach.  While well-intentioned, I thought the focus odd, and I wasn't the only one.  Within a few days, the original text was pulled, and replaced with what you see today.  It wasn't until tonight, on a sweet solo ride around the Makara Loop, pockets bulging with about half a dozen inner tubes (see previous blog), I decided to have a crack myself.

Who is this fella, epitomising cool?  Back in the day, knee garked, mimicking Euro-pros he'd been studying for years... 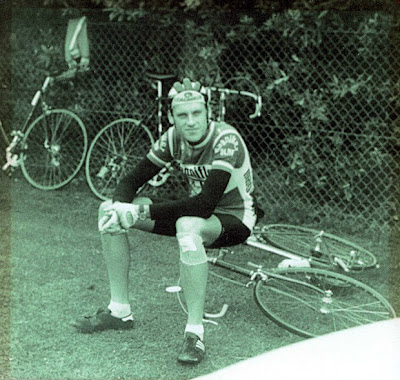 I first met Oli Brooke-White back in the late-90s, at the long lost Cycle Services.  I'd not yet discovered mountainbiking, let alone road riding, but was a heavy and hard commuter.  I'd been smashing power climbs between my parents' place in Strathmore and Victoria University on the hill above the city for 7 years, but was no cyclist.  My single bike was merely the fastest and cheapest way for me to get between home and school - sub 20-minutes with a favourable wind and traffic light sequence.  Cycle Services was one of three stores near my route, the other two being Burkes in Kilbirnie, and Arie's Cyclery in Newtown.  At some point, something must have shat itself at the city end of the ride, and I'd walked into the purple Cuba St store.  Soon after leaving the store, I knew I'd be back - the bike had actually been fixed, something of a novelty for me, with nothing but a string of bad repair jobs to that point.  My bikes have been in Oli's capable hands ever since.

Cycle Services closed in 2000, which came as a huge disappointment to me.  I'd taken to "sifting" in their shop, as they called it, had been sold my first mountainbike - a DBR V-Link - and had enjoyed some racing in a funky CS sleeveless jersey, my best result being a 3rd place in a series round (a mini version of the 9 Peaks Ride).  Later that year, the news that Oli was opening Roadworks in Holloway Road arrived, to my relief!

I was a Dad by this stage, and when Kaitlyn started creche, parking my car in Adams Terrace of Aro Street meant convenient and therefore regular visits to Oli's workshop.  While our business relationship cruised along, our friendship and my admiration for the man deepened.  And there was a lot to admire:  his workmanship was faultless, he seemed to have a passion for my bicycle (and no doubt every customer's) which inspired me to view it with similar passion, and, as we slowly gave each other insight into our wider worlds, he became a role model for me as a father and a partner.  His clear priority for his family over everything else impresses me to this day.

Soon, my CS jersey was replaced by a Roadworks one, and I wore it whenever I raced, sometimes with success.  I punctured in fourth place a couple of kilometres from the end of the Karapoti Challenge one year, but returned a few years later and took overall honours.  I won a few sport-class mountain bike orienteering events, and together Oli and I won the Vets Class (in one of the incredibly rare rides we've done "together") at the Makara Peak Rally's Creek to Peak event.  Over this period, beneath the surface my mental health was slowly worsening, and I had little self esteem.  These "wins" were not victories in my mind - I perceived them as efforts in obscure or second-rate events, and not worthy of celebration.  Oli did not share my perception, and always made it clear how proud he was of me.

In late 2006 I had a real meltdown, and Oli was right there for me.  I would joke about lying on his couch as a patient might do in his shrink's office, but Oli listened when I really needed someone to.

Since my 2nd year at varsity in 1993, my weight had hovered around 95kg, but over a four month period from November that year, 12kg almost literally dripped off me, and in March 2007, I took 40 minutes off my Karapoti best time, completing in 2:47, puncture and all.  Oli was the first person I contacted after that and every other race over the period.  That summer I won the 8 hour Akatarawa Attack with Simon in excellent style, and I became one of Oli's few sponsored riders.  I was grateful for the recognition, and support, but worried from time to time about what could possibly be in it for Oli.  My side of the deal was clear - awesome quality and priority service at bargain basement rates.  But, what was I offering him?!  At least I had the sense to realise that was his call to make, and concentrated when possible on my riding. 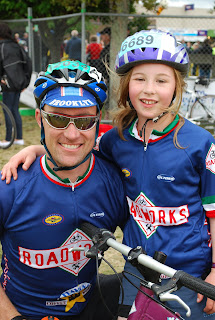 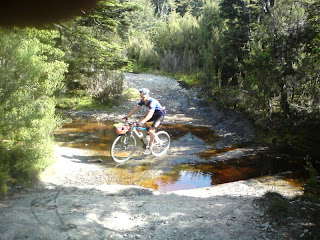 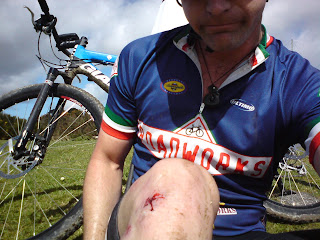 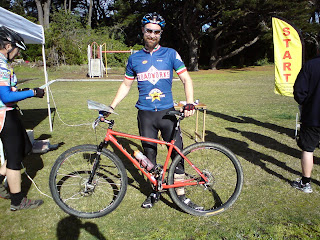 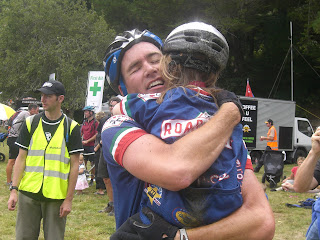 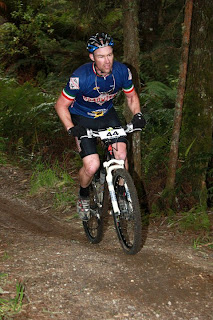 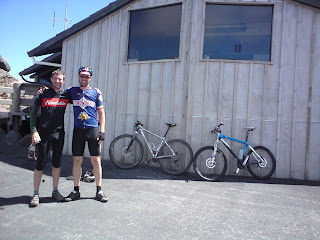 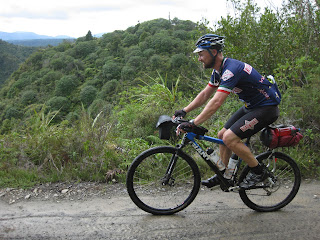 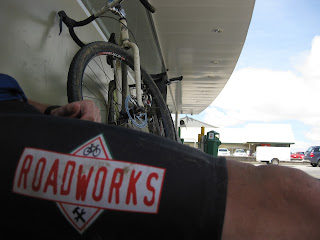 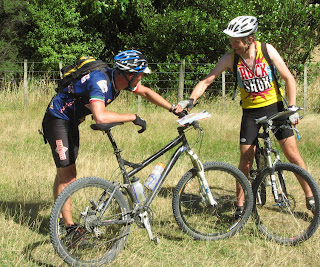 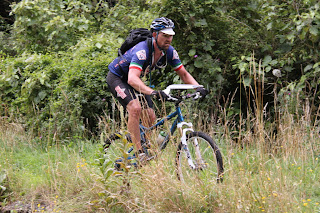 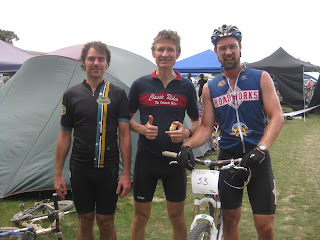 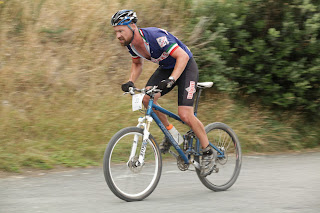 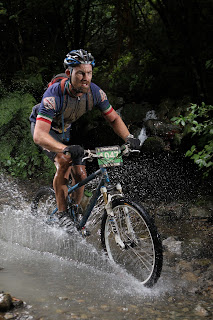 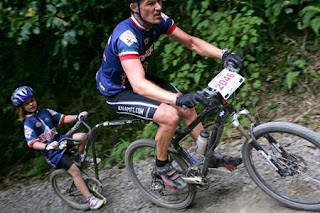 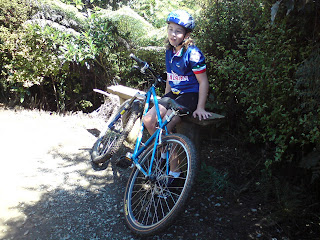 Can all that really be good for business?!

Oli and I have had our personal challenges over the last decade.  I'm going to boldly claim our friendship has helped on those occasions, and that we've been able to provide useful support for each other.  We've butted heads from time to time, and while we're both stubborn men, we've been quick to make things right again.

At the moment, Oli's recovering, much more slowly than he'd like, from a long awaited hernia operation.  While physically very different from the man sitting on his drop bars in the leading photo of this post, he's no less a cyclist now than he was then.  I love reading his ride reports, and dearly look forward to the one when he next describes the glorious feelings as he finally fires his legs in anger again.

We share many personality traits, and another is impatience.  I've had several injuries which have seen me off the bike for a prolonged period, so know what Oli's going through now.  I also know that it is only a matter of time, and while the wait may seem insufferable, it will end.   Kia kaha bro, and try not to think about it too much.  Watch your jug boil, or paint something...

I had a friend at school who won a national 800m running title wearing a particular pair of underpants.  He called them his "race undies", which I found curious.  I didn't get it then, but I do now.

When I pull on my Roadworks shorts and jersey, I feel stronger.  When I'm deep in the box, and look down at the Roadworks sticker on my top tube, and see the drops of sweat from my chin ricocheting off it, I know I will be OK, and I dig deeper.  When I wear that kit, it makes me faster, not because my legs are any better, but because I have better command of them.

Oli Brooke-White, you have helped foster a love of cycling in me.  It has played such a major part in my life to date, and so too have you, both indirectly and directly.  Thank you for your generous support over all these years - I couldn't be prouder.  I look forward to rocking the kit again soon (once all this crazy costumery is over).  Even more so, I look forward to you rocking the kit again.  It might be weeks yet, but it'll be soon.  Hang in there brother, but do so knowing this man holds you in the highest regard.  And, if jealousy was something I indulged in, I'd be seriously jealous that your photo's cooler than mine!

That photo is indeed rad.  And the dude in it is indeed awesome.