Grandest loop of a lifetime?!

Soon after getting home from an MTBO race in St Pats forest, the "perfect storm" arrived, dumping snow over Wellington unlike any I've seen in the near 40 years I've lived here.  The highlight of Sunday night was nailing Simon with a well timed snowball, and the hits just kept on coming.

I rode my singlespeed to work the next morning under clear skies.  It was seriously cool passing cars covered in snow, and the odd piles on the side of the road.  By mid-morning, it was snowing again, and I took the opportunity to cruise around downtown Welly in a snowstorm, not sure I'd ever get the chance again!

I headed to Newtown after work for Ash's spin class, and didn't really bring tha noise.  Karori seemed like a long way away when I was done.  I stopped at the bottom of Aro Valley to put my cotton cap on over my beanie, and my big woollen mittens on over my winter gloves.  These helped, but the novelty of riding in the snowy conditions was starting to wear thin.  I particularly didn't like being passed by cars - the spray of wet snow that inevitably coated at least one of my feet was insult to injury.  Soon after getting home, I was sitting in front of a fire with a hot bowl of soup, and sensation was starting to return to my extremities.

Tuesday morning dawned fine, as Monday had, and on account of the mounting pile of wet clothing, I decided to work from home.  Kaitlyn's school was closed, so work made way for a quick walk along part of the Skyline track with her and her Mum, treating us to scenes reminiscent of alpine villages rather than little old Wellington! 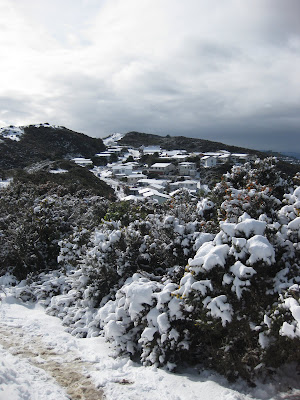 When I got home, I managed to get an assignment written before stumbling upon a good friend's blog, in which he wrote "how many opportunities will I get to go running in the snow in Wellington?!"   I realised that despite my reluctance, I absolutely had to do a quick lap of Makara Peak, and retrieved my Ground Effect waterproof top and bottoms from where they were hanging over the shower.

Flux Turner was still covered in a few kilos of St Pats forest, so it would have to be the singlespeed again. I added a bit of air to the annoyingly narrow 700x35C Sammy Slick tyre on the front, and let a bit out of the back.  Not a great day to be caught short, I made sure I had a pump and spare tube.  And my camera!

The ride up Koru was pretty cool, with patches of snow around, and leaves all over the place - the bush had probably been nailed by a few hailstorms, and was a bit the worse for wear.  I popped out to the Skills Area, and looking across to Hawkins Hill saw the snow flurries starting up!  Things were about to get a bit more interesting! 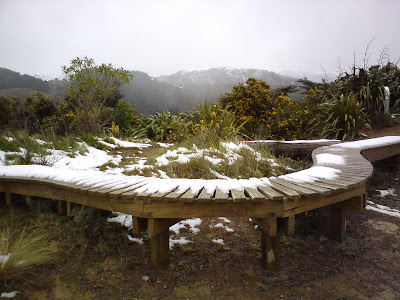 I was enjoying the ride, and the novelty of the snow-lined track.  It looked like the park had been getting an impressive amount of use since the storm started on Sunday night, and the riding line of Koru was mostly clear. 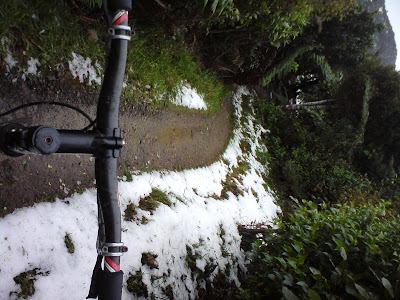 Into Sally Alley, increasing elevation and distance from the carpark combined, with the outcome quite a lot more snow on the track.  I started to struggle holding my line! 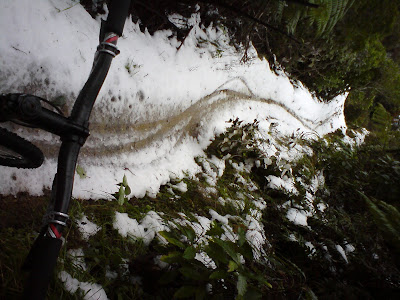 Last time through this loop I punctured a big old 29x2.3 tyre, so I was taking it pretty easy on the narrow 'cross tyres.  Aside from a few slips and slides, they were hooking up well, and I was managing to isolate most of the bumps with my arms. 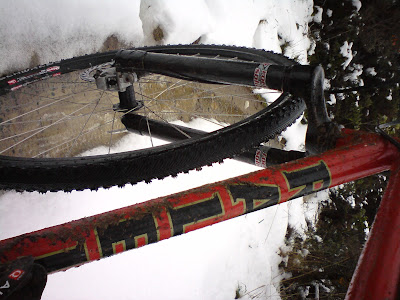 By the time I popped out onto Aratihi, it was fully snowing, giving pretty amazing views up the valley to the summit.  There was also a hell of a lot more snow on the track, and the going was getting tougher. 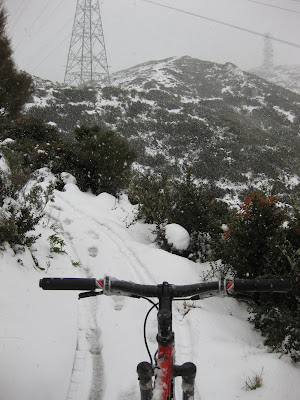 No sooner had I passed the turnoff to Upper Leaping Lizard than I was lying in the snow.  And again, and again.  At least the landings were soft!  But, they were also cold and wet.  I could see my feet and hands were still attached, but couldn't really feel them any more.  At least the singlespeed meant I didn't need my thumbs for changing gears!

I had to walk a lot of this third quarter of Aratihi - starting off in the deep snow was pretty tough, and without forward momentum, my front wheel seemed to have a mind of its own.  I jumped out onto the 4WD road just below the pylon, and promptly discovered what an awesome bike stand a snow drift makes! 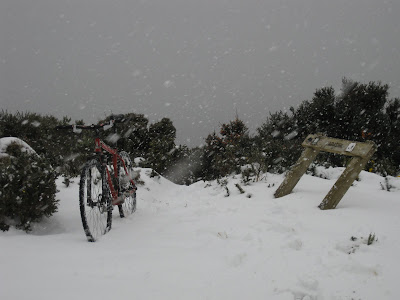 The 4WD road was mostly rideable, but I ended up walking the top section to the summit.  The snow wasn't quite deep enough for me to reenact my new trick at the summit, but the map board did the trick. 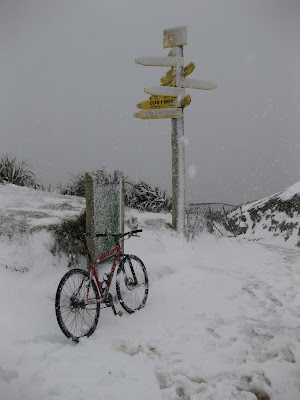 I slithered my way down the 4WD road to the top of North Face, and found the going through the deep snow was much easier with a bit of gravity-induced momentum.  The narrow tyres cut through the snow nicely when they were moving forward!

By this stage, my feet were well and truly numb, as were my thumbs and forefingers.  Despite this, I was quite amazed at how functional the fingers were, and braking occurred as per normal.

The views over Karori were even more impressive than usual! 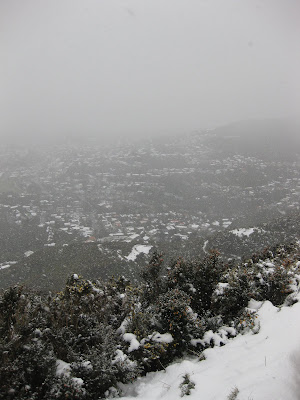 I was tempted to cut down to Allington Road, but figured my fingers couldn't get any colder than they were, and was soon at the bottom of Lazy Fern.  There's a bit of chainsaw work needed in there - a couple of big trees obviously couldn't cope with the mass of accumulated snow on their branches.

I had a nice tail wind up South Karori Road, and was soon standing in front of my fireplace enduring the horrible reheating-pains in my digits.    Unlike the night before though, I was also sporting an ear to ear grin.

Cheers to Dave for the moment of clarity, and to the Makara Peak Supporters for building such an awesome facility on my doorstep.  Oh, and cheers to the weather goddesses for the AMAZINGLY AWESOME ONCE IN A LIFETIME STORM!!!!!  Whoop whoop!
Posted by sifter at 8:53 PM