I've had a great first week in France. My bike missed the London connection, and so didn't arrive until Saturday evening. By that stage, the travel agent was closed, and so I couldn't leave my bike bag there until Monday morning. So, a day in Paris on Sunday!

I decided against going to Le Mans. Instead, I headed south from Chartres, doing the 2012 final TT stage in reverse. Very cool to see the Wiggo encouragement painted on the road. Bonneval was closed, so I pushed on to Chateaudun for the night.

After 200km the previous day, 295km to Poitiers was hard work. The first 190 was into a headwind, but at least I found accommodation without too much hassle. And, I'd made up the two day delay.

The ride to Bordeaux got longer than intended, with poor mapping and hotel difficulties. Not only did I spend 3 times the usual rate, but was north of town, heading south the next day.

Which, was wet!!! But dead flat. Dax was a welcome sight, but earlier than the previous days, by virtue of only covering 180km vs a 250km average.

Today, I cruised out to Biarritz on the coast, and then rode an hour towards the hills, and Cambo-les-Bains, where I currently sit. I have 1050km on the clock, but only a tiny amount of climbing.

My gear's been great, though I might buy some eye-drops yet. Two fingers on my left hand are numb, but all else is fine. Mood-wise, I feel decidedly normal, in the other person's normal sense. Cool!

If you want to be in on the regular photo action, befriend John Randal on facebook, temporarily is fine.

Into the mountains tomorrow. Will be interesting to see how that goes!!!! 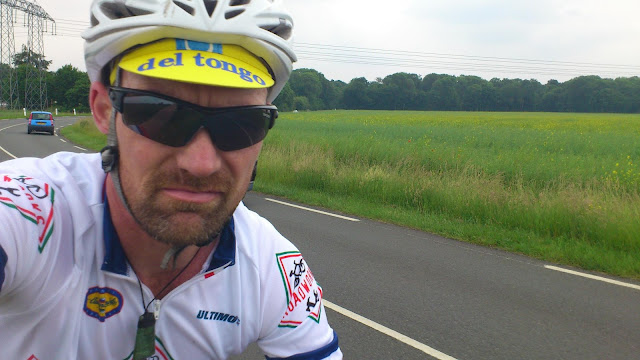