I made the last post at the end of my first week in France, and subsequently forgot. So this brings me through to the end of the second week of riding.

My first mountain stage was a beauty! It featured the hors categorie Col de Soudet, which had a really uneven gradient, and had stretches well over 10% which had me wishing for a triple chainset.

Col de Marie Blanque, which followed, had me really struggling, and I had to stop for a few minutes before tackling the final 2km which ascended 250vm. Ouch! What goes up, must come down though, and I enjoyed a nice fast run into Pau.

The next stage was to Lourdes. It started with a nice loop in the countryside, during which I was glad for my commuter instincts at a roundabout in Lacq. After a couple of small climbs, I really enjoyed the Col d'Aubisque. It took me ages, mostly on account of all the photo stops!

I spent that night in Lourdes, and the next morning set off with minimal gear. I was riding a loop west to Bagneres de Luchon, before coming back via four massive climbs. The rain started at the top of the first, the Col de Peyresourde, and by the top of the Col d'Aspin, the thunder had started. While the Col du Tourmalet was closed to cars, I'd been told it was possible to get a bike through. Nonetheless, yet through, and chilly after a long descent, I decided a thunderstorm was not the time to take on this beast, and dropped back to Lourdes via Bagneres de Bigorre.

The next day was wet, but I decided to give the Tourmalet another chance, this time from the other side.

I headed up the valley to Luz St Saveur, but by the time I got there, I knew Tourmalet was out of the question. The river was up, and the cold air riding it down was intense. I'd misses Luz Ardiden the previous day, too, and despite that being a lesser climb, I ruled that out too.

Just as well. I got out of the gorge below Luz less than an hour before the road flooded. By the time I got back to Lourdes it was clear all hell was breaking loose, and before long they were in a state of emergency.

The next day I moved west to St Gaudens. The weather was better, but I couldn't access the base of the Port de Bales climb. The next valley along, that of La Garonne, was seriously affected by the heavy rain and late snow melt.

I went to see La Grande Boucle, a French comedy about a bike shop assistant's lap of France. I didn't understand all of it, but enjoyed it nonetheless.

The next day was tough. It started on the Col de Portet d'Aspet and went up and up from there! I met a friend of some friends at the Fabio Casartelli memorial which was a hoot. It also offset my shock to realise he'd died on the very last corner of the descent.

By the time the sixth climb of the day came around, my legs were toast, but I pushed on up to Plateau de Beille. I should really have left my gear at the bottom, but I was nervous about losing it, so hauled it up the 1200vm climb.

The next morning was the reverse of a 2013 stage. I had to ride up to Ax-3-Domaines first of all to being the stage from the hilltop finish.

The Port de Pailheres was a lovely climb. I started behind a tour group, and rode through almost the entire bunch. I also saw a Garmin rider coming down, followed by a Garmin van. Hesjedal perhaps?

I got very cold on the long descent, and the afternoon's ride to Castres dragged on as a result. I think I lose a lot of energy when it's cold.

Yesterday was Castres to Montpellier, another stage in the reverse direction. I really enjoyed the climbs, and thought I had the pick of them. It was cool to see various road closure notifications. The Tour's coming back to town!

Today was a tiki tour in the Camargue. I've given myself two days to get to Carpentras for the Ventoux stage. I saw a wonderful fortified town soon after the pretty gross seaside resort, La Grande Motte. Despite expecting to see thousands of flamingos, after a 40km side trip, I was happy to see a flock of 20 or so.

The headwind into Nimes more than made up for one of those two HC climbs I missed out on in the Pyrenees! 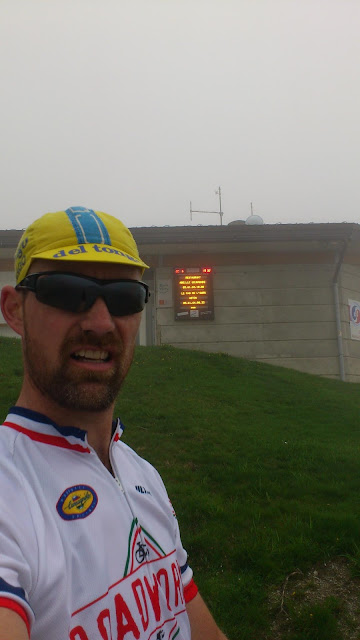