By virtually all metrics, the North City Shopping Centre Good Friday Criterium was a great success - most importantly, $2100 was raised for the Mental Health Foundation of New Zealand.

The day began on-site for the organising crew at 8am.  First order of business was to transform two levels of shopping mall carpark into a race course.  About 2km of tape, eight goal-post pads, and 25 road cones later, it was time to set up the BBQ, and hope that the gloriously fine weather wouldn't put too many people off.

Until midday, the course was open to anyone and everyone.  The morning session attracted about 50 riders - it was great to see some kick-bikes and scooters, and even a loaded touring bike.  A gold-coin donation granted access, and thanks to Trina, an opportunity to raid a box full to the brim with easter eggs.  For each rider, there was typically a parent or two, and there was a nice buzz about it all.

It was fun to watch these unfold - laps were taking only a minute or two (or three), and sometimes quite a lot would change in the space of those few minutes.

The kids' race was very tactical.  Tom, Elliot and Oli rode at the front of the field throughout, and Tom waited patiently for the final lap to cut loose.


The MTB race was not unlike an actual MTB race where the fastest get to the front immediately, and barring mishap, the order remains constant, and only the time gaps increasing as the race went on.

It was great to see Gareth Warnock lining up in the men's B field - he'd been the peer reviewer of my course - and by the time he'd had enough, Kerrin Allwood had established a commanding lead.

The Vets' race blew to bits very early on, while the women's race was fascinating to watch.

Young Grace Saywell glued herself to Kim Hurst's wheel for the first 20 minutes or so.


Kim was the first entrant, and recent winner of the Karapoti Classic, and was up to the task today, riding Grace off her wheel to claim the victory by almost a lap.


The final race was truly spectacular.  The dozen men stayed together for at least the first half of the race, and were moving noticeably faster than they had in practice!  At some point, Mike Naylor put in a searing attack, and rode solo to the line.


For the record, the results were:


It's worth checking out a the cool on-course video Lisa Morgan took, at the event's Facebook page, and there are some other great short clips too.

A lot of work went into this event, and many deserve thanks.

First and foremost, North City Shopping Centre (and owners Kiwi Property) were both amazing to deal with, and both brave and generous to allow an event of this nature to go forward.  Thanks in particular to Marketing Manager, Caroline Shearman-York.  In addition to access to the centre, they supplied some gift cards, and covered the (public holiday) costs of security.

The event could not have gone ahead without the underwriting of the Wellington Masters Cycling Club.  Thanks to President Rob Te Moana and the committee for facilitating the event, providing the registration system, and essential insurance cover.


Bunnings Porirua, and in particular, Activities Organiser Jackie Smith, were also behind the event from the very beginning.  They provided course tape (supplemented by supplies from the Huttcross crew), spot prizes, and the use of the store's BBQ, gazebo, and a trailer to haul it all around.

Capital Cycles donated a large number of spot prizes, and logistical support via Gareth and Liam.  Wheelworks also donated some spot prizes.  WORD were official first-aiders on the day, and thankfully didn't have too much to do!

Pak'n'Save Kilbirnie donated edible supplies for the BBQ, and my colleagues Francine and Pam both donated some delicious baking for sale (you guys rock!).

Petone Rugby Club lent us a few goal-post pads for the day, and these were used to line the leading edge of a few somewhat unforgiving concrete poles.  Thanks to Club Captain Mike Woollett for these. 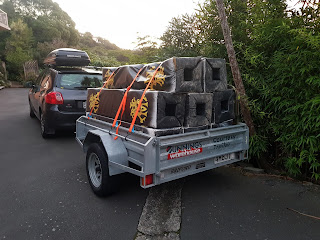 Hirepool discounted the hire of a toilet.

Many hands made light work, and it was both amazing and essential to have so many volunteers on the day.  Special thanks to:

When a cycling event organiser complains about turnout, and weather, it's usually because bad weather put people off.  The next day's blustery and overcast conditions possibly would have given a boost in numbers and may have been preferable to the light winds and blue skies.

On the upside, the event went off without a hitch. We left the carpark cleaner than we found it, and provided a nice safe environment for those that took part.

Occasionally during the lead-in, I lamented running it at Easter - quite a few folk were out of town, and there was no possibility of ducking to the supermarket for supplies if we ran out of stock.  I had to remind myself that the event was only possible because of the Good Friday date - one of the few days of the year the mall was completely closed.

I think the course worked well, though in hindsight, I'd have redesigned the top level to avoid a dripping pipe, and to make the top turn very different than the lower level's (to prevent people trying to ride them both the same way when their shape was subtly different).

I wish I'd had a bit more time and energy for promoting the event, but it's been a very busy month, and between work, other fundraising activities, and 15-20 hours per week training, time has been somewhat scarce.

It was heartening to see people having fun, and in many ways it was good to have low numbers to keep everything manageable.  The $2100 raised is not an insignificant boost to the Mental Health Foundation's coffers, and it was wonderful to see and hear people enjoying themselves, whether riding, spectating, or eating!  With luck, this will not be the only time this novel event goes ahead.

For my part, this marks the last major undertaking in my fundraising activities.  I must admit to have getting a bit lost in the scale of things, but I'm sure in the fullness of time, memories of the small problems will fade, and the $12,000-plus raised over the last few months will fully register.

This blog describes a fundraising project for the Mental Health Foundation of New Zealand.
To make a donation, visit https://events.mentalhealth.org.nz/fundraisers/sifter.  Any contribution, big or small is greatly appreciated, and will be put to good use by the fine folk at MHF.
Posted by sifter at 10:55 AM