Back to where it all began: the One Day Ahead premiere, and Hobbiton Grand Fondo

With the exception of a month or so of sporadic email correspondence, Team NZ's Tour de France journey started in Cambridge, in early December, 2017.

We were warned by Jonathan, (directeur sportif), that:

Matt, my good mate, Google NZ man and expert vlogger may join us at some point over the weekend and take some footage of our riding using his drone. I'm trying to persuade Matt to join us on the tour to document the trip and assist with vlog daily updates.


Jump forward to early August, 2018, and Matt had arrived back in his home town of Nelson with no less than two terabytes of video data, and immediately got to thinking about what to make of it all.

In France, we'd quickly become accustomed to Matt's presence.  He'd made it clear to us that we could tell him to piss off, but for whatever reason(s) - his own good management, and our trust of him, among others, we generally responded well to him.

He had a dedicated van, and would film us out of the boot, his passenger window (often while sitting on the door), by drone, and occasionally from the roadside.  Hardly a stop went by without him asking at least one of us how things were going - and he quickly became more than just the guy behind the camera.

Matt was, and is, part of the team.   He not only joined us for the punchy 65km stage in the Pyrenees, but alongside Bill Boakes (usually literally), did as many push-ups each day as we'd ridden kilometres.

While the riders' Tour de France pretty much wrapped up when we got back to NZ, Matt's had only really begun.  While we'd trained our guts out for 6 months prior to the trip, he spent 6 months afterwards diligently finding a story tucked away in the hundred or so hours of footage he had shot.

Eventually, the word came:  our fourth team assembly would be back where it all began.  Matt's film (and our story), One Day Ahead, would premiere in Cambridge as part of a week-long cycling festival.


As the big day approached, the excitement I was feeling to see everyone was fortunately dominating the nervousness I had about seeing the film.   Sarah and I flew to Auckland with Bill, and the three of us drove south together to the accommodation Mike had organised on the outskirts of Hamilton - the joys of him having "left [his] job to ride the Tour de France."

There we found Aaron and Sonya, Dr Fish, Jason, Jonathan and Julie, and Mike and his partner Lisa.  There were so many conversations to have, but a warm hug for everyone was as good a place to start as any.

Our arrival has slowed everyone else's departure down a bit, and when we finally arrived at the Good Union pub in Cambridge, my parents, who'd driven up from Wellington, were contemplating their second wines!

Paul and his wife Lena arrived soon after, followed by Cam and his family, and then Stu and his partner Fiona.

After an early dinner, we made our way to the film venue, where I was delighted to find my colleague Trish.  Part of the university's HR team, she'd kept a very close eye on me throughout the awareness-raising project at the university, and it was so nice to know she'd have a chance to keep an eye on me again at this event.

Mere moments before Brett Cotter from the Big Bike Film Night first addressed the crowd, Bruce appeared - his new job at Rocket Lab (yes, the Rocket Lab) and the start of Auckland's anniversary weekend, had meant a less than quick getaway.  We all breathed a sigh of relief, and as the lights dimmed, only the UK-based Dave, and Belgium-based Roger were missing.

The band was back together.

What followed is impossible for me to objectively comment on, though it struck me as a genuine story, beautifully told.  We were all completely blown away by the job Matt had done - the film is more than we could have ever have hoped for.


The response from our 150 plus audience was full of praise for the efforts of film maker Matt Jenke from Silver Eye Films. Matt has accomplished so much in this breathtaking journey following these 8 ordinary Kiwi blokes riding the Tour De France riding one day ahead of the pros.  As to be expected the cinematography was awe inspiring, and the story offers messages of comradery, support, and friendship; this is so much more than just a cycling movie!!!

Brett's in his fifth year of taking compilations of short and long cycling films around NZ, so has seen plenty that have not made the cut, and also plenty of great ones.  He'd taken a punt on this, agreeing to screen it sight unseen, but seemed positively delighted with it.

After a short break, during which time Bruce got his hug too, we all assembled on the stage for a Q&A session.


We were asked by one audience-member, how we'd each coped upon return to NZ.  I knew already that the answers were mixed.  Some had experienced at times extreme post-event lows, and for a few, ongoing dampened enthusiasm for riding.

I hadn't had a mood crash, and if anything, had fared better mood-wise in the second half of the year than I had in the first.  Rather, I described an overwhelming sense of relief that it was over - a welcome end to the fundraising, and structured training - neither of which I'd really had enough time for.  But, I also described what is best described as a period of mourning, for the people I'd been with day in, day out, for a month.

We'd entered the fray as strangers, became a team, and emerged out the other end as nothing less than a family.  For several months, I'd grieved in their absence, and being surrounded by them as I spoke had made that simple truth ever clearer.

I'd managed (to my surprise) to keep control of my emotions - throughout both the screening and the Q&A session.  The story Matt told had been sensitively put together, and at times funny - but my inner calm all came to a screaming halt when I met Stu's sister.

Whether the film had shown it or not, there were brief but pivotal moments in France where I alone had looked after him, and he alone had looked after me.  And, the loving bond that formed in no small part due to those moments has helped me immensely in the months since France.  Hearing Stu's sister's take on things overwhelmed me momentarily, well and truly cutting through my brain's general tendency to flat-line my emotional state.

I was reminded of how I'd felt after my grandmother died, a time at which I'd noted that it was nice to have "normal human emotions", unfiltered by a mood disorder or medication.

After mingling a bit more, the majority of us retired to the motel, and chatted for as long as our eyelids could manage.

The next day, most of us were entered in the Hobbiton Gran Fondo.  After the late-night, the morning nonetheless went smoothly, and just before 8:30am, I found myself on the startline next to Stu and Jason, wearing only my second race number since the Graperide, almost a year ago.

Stu had been keen for a good hit-out, and had entered start wave 1.  I'd decided to join him, and hang on for grim death until Hobbiton, where I planned to stop and wait for the others.

And, that was pretty much how it played out.  Hamish Bond proceeded to ride almost everyone off his wheel, and Stu, Jason and I were left in a chase bunch of about 25 riders who were about one minute down an hour into the event.

After a torrid start, I was feeling OK once properly warmed up, but had to chase back on to the bunch a couple of times.  Actually succeeding was an unexpected surprise the second time - unbeknownst to them, I was a beneficiary of the group collectively deciding to ease back after the effort they'd put in had unhitched me.

Predictably, I was the only one of the group to peel off at Hobbiton.  On my lonesome, I enjoyed a big blueberry muffin, and glass of ginger-beer, much to the bemusement of the helpers. 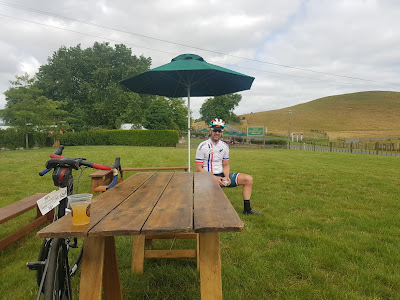 I rolled back around the corner, where I had a better view of the road below.  A couple of small groups - remnants of my start wave - passed by, and I had time for a slash before eventually a few familiar white jerseys appeared over a rise.  I pulled a u-turn, and slotted into a group of 20 or so, which contained Steven, Mike, Paul and Bill.  Of the Team NZ starters, only Jonny had evaded my company!

Also in the bunch was Stu's lovely lady, Fiona.  Before Hobbiton, I'd asked Stu how I'd recognise her, and he'd described her to a T.

Before we all rolled into Cambridge, I had a couple of opportunities to do my best motorbike impression, and pull Fiona back across gaps that had opened up on a couple of short climbs.  It was nice to open the taps, and to feel some of my old power lurking in legs which haven't been fired in real anger for quite some time. 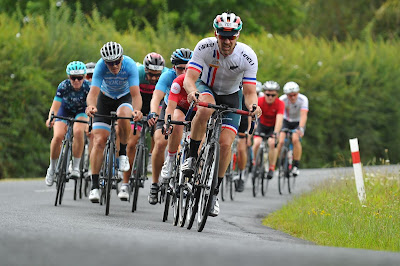 Aaron, Bruce and Sonya were waiting for us at the finish, and for the next hour or so, we all enjoyed hanging out in the sun, continuing the process of catching up that had begun the previous afternoon and had only stopped for sleep.

After prize-giving, the day's farewells began - Stu and Fiona were staying another night in Cambridge, and Jason was heading back to Hawke's Bay.  The rest of us drove to Auckland, and regrouped at Paul and Lena's place for a very lovely BBQ and hours more chit-chat.

It was abundantly clear that we hold a common a desire to keep writing the TDF Team NZ story.  The shared experience (and what an experience!) helped us form deep bonds, and it is clear that everyone is keen for opportunities to be together once more.  Bike riding will ensue, no doubt, but we will also continue conversations about our lives, hopes and dreams, victories and defeats, ups and downs.  Just like families do.

One Day Ahead is screening in Wellington, Auckland and Christchurch as part of a Big Bike Film Night feature series.  Beyond that, there will no doubt be other opportunities to see the film - I personally hope it'll end up in Air New Zealand's seat-back catalogue, and it wouldn't be out of place in a film festival or two.  I'm also keen to organise a screening or two at work, but all in good time.

Stu, Mike, and hopefully Matt, will be in Wellington on Wednesday 27 February for the two screenings that night, and I'm heading down for the Christchurch show on the Friday, with my bicycle.

In the meantime, many wonderful memories have just had a good polish, a few new ones have been added, and all is well in the world.

I can't wait to see that wonderful movie and those wonderful people again.  I'm excited that so many friends and family who've spurred me on over the years will also get a further glimpse into what went down last July.