Paul Kennett, what were you thinking?!

last week, Simon invited me out to Karapoti with him to check out the "Karapoti Original" course for Michael Jacques, in advance of the post-Karapoti Classic event this coming March. I was otherwise unengaged, so naturally agreed.

I met Simon at the new Dowse Interchange where he'd been checking out safety implications for cyclists and pedestrians. After the short drive to Karapoti Park, we revealed and processed a whole lot of important things, the most relevant being that Michael wouldn't be joining us, and that I'd left my camelpak at home, complete with spare tools, food, jacket and uber-light. While we didn't have to wait for Michael, the sun was going to go down whether we were done or not, and with that in mind we set off up Akatarawa Road.

The road climb was nice enough, and we chatted on and off. After a short stop at the saddle we started along the course you'd originally set back in 1986. The start was pretty rough, and that was with our modern equipment! Damn you guys were hardcore back then. In fact, the first kilometre or so was probably the slowest for us, especially as we had to negotiate some environmental vandalism on a high-scale. It looked as if dozens of trees had been felled across the 4WD track simply to stop illegal access. Surely a gate would've sufficed?!

Beyond those trees was an iron gate and a sign which said something about "Menin Reiki" and "espassing". Neither of us could make out the beginning of the second line. Initially, when we had any doubt about the route, the quality of the track helped, and we simply followed the "best" option until we hit the access road to the valley from the Waikanae side. It would have been interesting to see the start back in '86. This course certainly gets straight into business, and the thought of many riders competing off the bat for space is pretty entertaining. The fast starters certainly would have an advantage.

There are some pretty cool historical relics at Menin Reiki (do you have any idea where that name came from?!). Here's a photo of Simon checking out the valley. Please forgive the somewhat eerie combination of the memorial and Simon's "share the road" vest. 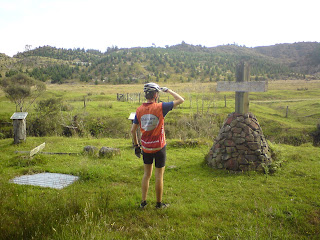 After the short climb out of this valley, we came to the only navigational challenge of the section into the Rock Garden, where basically the tracks became pretty indistinct, and unused. Awesome from a riding point of view, and a far cry from the "highway" nature of today's Karapoti. We spent quite a bit of time riding through a lovely native bush tunnel. I apologised to Simon for loving it so much - somehow I feel obliged to love singletrack above all in response to the huge amount of volunteer effort (much of it Kennett Bros led) that's gone into developing places like Makara Peak. In actual fact though, bush clad 4WD is probably my favourite riding of all. Simon understood and agreed with me (I think). How about you? What's your take on what makes a "classic NZ mountainbike ride"?

The riding was great, and broken up by the occasional bog. Were these there back in your day? If they were, I'm glad they didn't put you off... 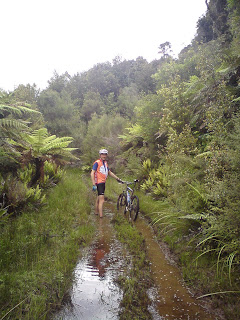 This tree had a nice track built around it, but somehow I ended up on top of it, waving my arms in the air like a fool... 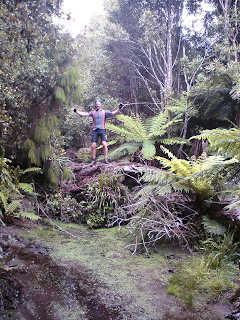 Soon afterwards, we popped out at the clearing before the Rock Garden, from a track that I may never have noticed if I hadn't helped Jonathan put tape across it about 5 years ago on the day before Karapoti (one of your last as organiser?). 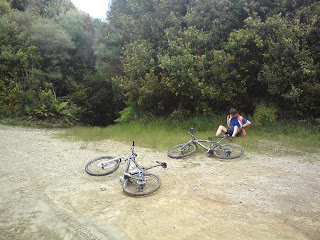 I note with interest that at this point you kept going deeper into the Akatarawas, namely down the Rock Garden and up Devil's Staircase. Simon and I didn't take this option last week though and instead headed "straight" back to the car via Deadwood. This ride was fantastic - the ascent to Deadwood was almost entirely ridable with some nice lines presumably established by people practicing in the other direction to our travel. The kereru were out in force which was very cool to see. At one stage a rather large specimen flew between Simon and I in a bush tunnel only to swoop vertically through an opening in the canopy and disappear from sight.

The descent was pretty cool too, though in places it seemed inconceivable that anyone could ride in the opposite direction. The wee scramble up to the top of the warm-up climb was short and sweet - in fact, I probably prefer walking up it than riding down (sketchy shitty piece of track that it is...). By the time we got to the gorge, we'd seen close to another dozen kereru, and we got to the car well before dark. We'd also discussed the relative merits of the "Karapoti Original" and the "Karapoti Classic", and this brings me back to the purpose of this letter.

What a sweet course! It was marvellous to reach the top of the Rock Garden without being stuffed after the laborious Deadwood climb. Also, this route has a natural "Challenge" option which of course has never been used as a race course, namely the ride Simon and I did. It is tougher than the existing Challenge course, but probably a better reflection of what someone not quite up to the Classic might enjoy. Apart from the land-access issues, I suppose the big drawback of this course is the fact it's not a loop. I'm not sure what I'd recommend there, but certainly it would be worth starting with a kilometre or two of Akatarawa Road just to spread people out. That aside, I think the whole ride from Karapoti Park is too long for a warm-up/down combination. Some sort of shuttle option would definitely be in order.

Anyway, while I commend you for this course, and the subsequent and long standing Classic course, I think you're mad to have kept this under wraps for so long! Myself, I'd have been tempted to come up with a solution that could have seen this used in the long term - maybe not as THE Karapoti but certainly as another event on the calendar. The riding is so sweet, and the options for the two classes are surely too good to miss?!