To bike, or not to bike, that is the question...

I was reminded today, while carrying my bike up a bit of track that was either incredibly boggy, or very steep, slippery and rooty, that sometimes it would be better not to have a bike. It also reminded me that I'd not got around to writing about Orienteering Hutt Valley's Christmas Rogaine.

As with 2008, the 2009 edition was a free-for-all, with both cyclists and traditional (foot) rogainers welcome. Simon and I had had a good ride out at Pencarrow the previous year in absolutely foul conditions, and though we'd collected the most points, the penalty for bikes had dropped us down into 4th place. This year's event was to be at St Pats Forest, on the western side of SH2 between the Silverstream Bridge and Moonshine. Normally off-limits, it was another nice opportunity to get in there.

The format was a four hour event, and it fitted in well with our training plan for the Akatarawa Attack (a similar event but 8 hours - now only a fortnight away). We drove out and registered, and got everything sorted for our departure. About 30 minutes before the start we got our maps, and were confronted with a confusing number of controls - the map was full of them! Simon had the great idea of drawing a line across the map which separated a couple of ridges, and then things became much clearer. We decided to head south on the back side of the course, then come north through the middle, before heading back to base along the river.

The weather had been pretty crappy (enough for the cricket the eventual winner was meant to be at to be cancelled) and so the field was relatively small. As is common at the start of these events, people scattered in all directions (well, two directions to be more precise). We were one of the few teams heading for the road "crossing" under the bridge and Moonshine Road. We bagged a couple of controls before heading into the forest, and then navigated well grabbing controls as we went. We spent a bit of time off the bike grovelling up and overgrown and scratchy bit of track, and then up some singletrack through some pines which would have been treacherous to descend on - pine needles sitting on wet clay can be like that.

The majority of the next hour's riding was on 4WD tracks, but at the very northern end of the course we found ourselves on some pretty neat singletrack - in fact it was nice enough to change our predisposition to grab a couple of controls as "out-and-back" trips from the 4WD road, and instead we connected them via the singletrack.

One of the nice differences between this event and the Akatarawa Attack was the rule which allowed us to dump our bikes. While this was no use for some great through trips, at least we could leave them to grab controls which were in steep country. Another element to this difference was that we got the chance to test our navigation skills a bit more than usual. One of the downsides of typical MTBO courses is that you must both take your bike to the controls and stay on track at all times, and so the controls, by necessity are all pretty easy to find if you're on the right track to begin with. Here though, the controls were down gullys, up steep banks, in stream beds - all over the show really, and it was a great opportunity to really study the map and the shape of the land and reconcile the two.

Normally I don't stop in the middle of a race to take a photo, but one control was hanging from a tree limb which was above a waterfall. I politely asked Simon to "do that again?!" and he duly obliged, bless him... 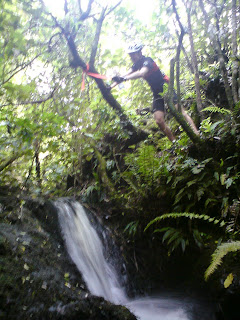 This one had taken a bit of effort to get to, and it was definitely worth leaving the bikes behind...

We had one bit of navigational trouble in the last hour, perhaps due to control placement, but as likely due to our slowly growing fatigue. It always fascinates me how the brain goes before the legs. The last ten minutes were pretty torrid, as we attempted to mop up the controls along the river. In the end we were a few seconds late - enough for a minute's penalty, but not enough to affect our second place. We'd been soundly thrashed by Bill Edwards, on foot and solo - he clearly was better off without a bike, but also is an accomplished foot orienteer. We'd have liked to have not had ours some of the time, but there's no way we would have claimed 2nd doing the whole thing on foot! That said, we're tempted to do a foot rogaine in the Akas in March... Eeek!
Posted by sifter at 6:10 PM