Mixing it up and sharing the love

I recently got an invitation to join my friends The Kennett Brothers and others on the launch of the National Cycleway - a two day ride through the Forgotten World Highway from Taumarunui to New Plymouth.  I chose not to join them, and instead would be spending Sunday in Wellington with my beautiful daughter Kaitlyn.

Cycling is a tricky sport as a father.  Ever since Kaitlyn grew out of her trailer bike, it hasn't been possible for us to race together.  While we occasionally get out for a ride where Kaitlyn's on her trusty Montana Judy, most of my riding is done away from her.  For the last few years, Kaitlyn has tended to spend Saturday with her Mum, so this has typically been a free-for-all as far as riding's concerned.  I've tended to try to concentrate any quality riding into that day, so that when we spend Sunday together, I'll have had a good ride under my belt.

This weekend, I fronted to the third of PNP's Balfour Pennington handicap series on Saturday.  I lined up in "Cat 1 Break", nominally the second fastest bunch on the road.  It was my first race outing on my lovely new Colnago, and I was pretty excited about that.  The race was frustrating at times, but I had a good ride, and while I didn't hold the front of the large group which hit the bottom of the final hill together, I finished knowing I couldn't really have done much better.  I'd felt strong on the flat, but haven't been doing much climbing lately, and am perhaps not best suited to the 39x25 granny gear on the Colnago.  Best I harden up!

After the finish up near the Mount Crawford Prison and a bit of sifting, I rolled back to the car and headed for home.  I didn't manage to catch Steve and Ash and a few other friends sessioning the top section of the Mt Vic Super D track, though had I been a little more attentive to my rear view mirror, I would have seen Steve waving at me.

We regrouped at my place an hour or so later, and headed out for a somewhat special ride (for me at least)!  I have just taken possession of my Cape Epic race rig, a stunning Yeti ASR5 Carbon, weighing in at a mere 24.25 pounds.  The wheels were built by Oli, and the bike put together by Yeti's Wellington rep, Zeph Wadsworth.  Megan's should be arriving soon, and with luck, we'll be racing a matching pair at the Day Night Thriller as Team Yeti.  Plenty more on this rig to follow!

Steve and I rode down to Makara Peak with Hamish (one of the easter bunnies) and his workmate Al, and we were met there by Ash and Leigh.  My bike was centre of attention for a while, as it had been at Friday night beers at Revolution Bicycles the night before.  I took point as we set off up Koru, and rode like a man possessed with interloper Andy King hot my heels.  We stopped to regroup at the bottom of the original steep route, panting!  The bike didn't feel unfamiliar at all, but boy did it feel fast!  The short stem and quick handling in particular were obvious, even at these early stages.

It was great to get out, and we collectively couldn't bring ourselves to stop and turn towards home.  Despite all having a few hours riding already under our belts, we continued through to the far end of Sally Alley.  Finally there we made the right turn, and were soon barrelling down Ridgeline Extension.

Before long, I was confronted with a very slippery looking boulder in the middle of the track.  Instead of going around it, or hopping over it like my more capable companions had done, I went straight over it, and was soon bringing my bike to a halt well off the side of the track. Unscathed, phew!  The learning process continued, but I was a bit more thoughtful with my navigation beyond that point.   While the others went to gather provisions I went home to light a fire, and had time to clean my steed before we whiled away the evening together at my place.

I love doing events, and while sometimes I really look forward to them for the challenges they bring, other times, I'm keen just to get along and support the event and its organisers.  I know how much work is involved putting an event on, and realise that these opportunities only exist as long as people are showing up.  Sunday had a cyclocross race on offer, and despite being #6 in a series of 8, I'd not yet made it out to one.

The CX series, organised by Mike Anderson of Bike Hutt fame, had been on my radar all winter but invariably something conspired against my participation.  The races are on Sundays, which coincides with my weekend-day with Kaitlyn.   She plays football in an all-girls team, and with the races out in Upper Hutt, mostly the conflict has been prohibitive.  Second, I was a bit nervous about the riding.  I'd done a 'cross race a couple of years ago on my commuter bike (a flat-bar roadie) with CX tyres on, but the early races had been insanely muddy, and I feared an event in similar conditions would be the straw that breaks my workhorse's back.  Plan B was my Raleigh, and I'd bought some Schwalbe Sammy Slicks to fit to the 29er wheels.  But, the singlespeed had me nervous about being stuck with a lousy gear.  In the end, gear anxiety was definitely the lesser of two evils, and I had the Raleigh on the back of the car when I collected Kaitlyn this Sunday morning.  We were soon a foursome, with my Mum and Dad joining us for the drive out to Upper Hutt.

We took the Silverstream bridge off SH2, and stopped at a wee coffee cart I'd discovered with some mates en route to a race in Whiteman's Valley.  Suitably armed, we finished the drive through the suburbs marveling at the level of church attendance.  Damn those places are busy out there!

By the time I'd signed in (as "sifter" for the first time ever!) and handed over another trivially small entry fee, there was little time for a warm up, and certainly no opportunity to check out the course.

We were told to line up at the start line, and as one of the first there, I needed to check which direction to point my bike in.  It was all academic though, as we were soon doing press-ups a short run away from where our bikes lay on the start line.

With press-up efforts ranging from a dismal 0 to a whopping 10, we were soon dashing towards our bikes, mounting up and getting under way!

Mike Anderson promptly opened up a gap on half a dozen of us who were hot on his heels, and showed the way over the first of the hurdles. 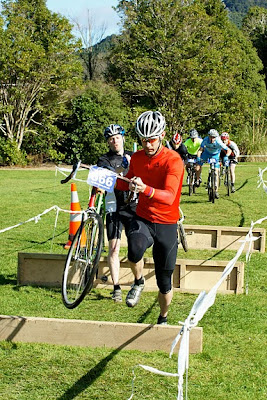 My first lap was by a country mile my worst, as I struggled to anticipate the twists and turns of the cleverly engineered course - it made full use of a pretty small venue, and put the acid on riders at various moments.  The race format was 40 minutes + 1 lap, and at lap times of just over 4 minutes, I had plenty of time to get used to it.

I was in second place by the end of lap 2, and was getting busy hunting Mike down! 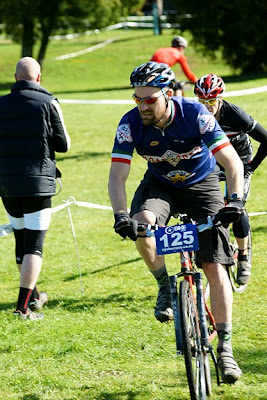 I was getting slowly but surely catching Mike - on average - he'd pull away from me on the tighter section of the course, and I'd eat into his lead on the open stuff. 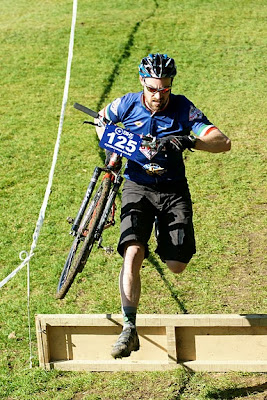 The top of the course was by far my biggest struggle, and while limiting my losses was top priority, it occasionally played second-fiddle to simply staying upright. 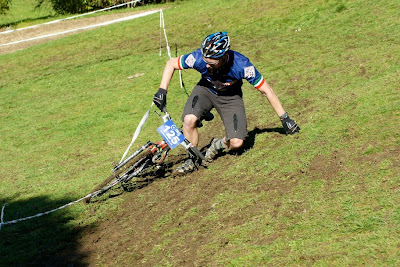 As the laps wore on, I tried not to let my intensity drop...

... and was finally hot on Mike's heels. 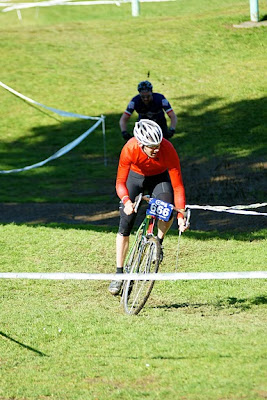 Just when the catch was impending, disaster struck Mike, and he dropped his chain.  As I went past, I told him to take a lap - unsure whether or not, like in criterium racing, riders could fix a mechanical and then rejoin the race where they left off one lap later.  Soon, once the course had looped back on itself, I sensed Mike in hot pursuit of me -  he clearly hadn't taken me up on my offer!  A second chain problem soon after saw me out front on my own, and rather than ease off, I just kept hammering away.

As time passes, I'm slowly realising I do have a "race gear" after all.  And, as I slowly eased out of it in the last couple of laps, I became aware for the first time of my beautiful parents and daughter who'd been on course for the duration of the race.
I also hadn't noticed the marshall counting down each minute of the 40, so my first indication of progress was with 2 minutes left of the 40.  At the end of that lap, I got the bell.  Not before racing past a fellow competitor track-standing just before the line. Had he beaten me over it, he'd have had to do an extra lap for his trouble! I don't know how long he'd been there!

The last lap was without incident, and I was soon crossing the line for what the commentator stressed was a cheeky win by a dirty burglar!  Guilty as charged, but it was either race B or spend the morning at a cafe in town.  I was bloody pleased to get out, and copping a bit of flack for it was a small price to pay!

The A grade race started soon after, with sit-ups as well as press-ups the order of the day.  Mum, Dad, Katy and I had a walk around the course while the riders knocked out their first couple of laps, and then it was into the car for the trip back to Wellington, where Katy's football team were eagerly awaiting her appearance!

All in all, it was a great weekend on the riding front:  a road race, a sifty mountain bike ride, and a balls-to-the-wall cyclocross race.  Three different bikes, and thrills all around.  Thanks to PNP Cycling Club and Bike Hutt for putting the events on - they are much appreciated!

What really capped it all off though, was being able to share the last ride with my family.  It's very cool to have them watch me doing something I love so much, when a lot of the time, all they have to go by are these words.  Yes, bike riding and racing is something I've done a fair bit of in the last while, and yes, it has often come at the expense of time with my family.  But, I'm glad they get to reap the fruits of that time - there's no doubt I'm a healthier and more chilled-out son and father than I would be without the outlet riding gives.  I'm also pleased for them to see me in the box from time to time, especially Kaitlyn.  Not bad for a kid to grow up knowing that there's some perverse joy to be found in digging deep and hurting!  Not to mention getting all dirty and covered in mud and whooping and hollering!  (Or maybe that's a lesson we adults learned from them.)

This coming Sunday, Kaitlyn turns 11.  There's a PNP race that day, but I won't be there!
Posted by sifter at 5:41 PM