Capping it all off!

The team were joined for dinner by some family and friends after the final stage, and then I left the hotel to stay in an apartment with Sarah.  It was strange to be away from everyone after almost four weeks together.

I'd left my bike at the hotel, so we returned there for breakfast, and again, it was fascinating to note my relief to be back there - funny what becomes familiar, and how dependant we can become.

We'd always planned to see the race finish, but given our proximity to the start (it had been a relatively straightforward 4km ride there the previous day), I suggested we go there as well.

Stu, Bruce, Steven and I were the remaining riders, with Paul off to Malaysia, Mike and Aaron independently to Italy, and Jason back to New Zealand.  Jonny dropped us all off, and Sarah and I wandered around with Stu, eventually laying claim to a 1 metre span of fence in a big courtyard.

While Stu and I chatted, Sarah darted off to watch the publicity caravan pass, then eventually we hit paydirt, and the riders started filing past to sign on.

Dion Smith seemed to approach the stage from behind, but we were excited to see Jack Bauer riding past.  He ignored our first cries of "Jack, Jack...", but when I shouted "KIWI", he turned with a big smile, contemplated pulling a u-turn, and shouted "I'll be back!".  He did return, and seemed very happy to linger, and had even been following our own progress around France.

About half the first riders had not come past, but we were indeed on the main thoroughfare.

Many riders had completely neutral expressions on their faces, and didn't interact with the crowd at all.  The French riders were popular, and Romain Bardet was one of very few that did stop! 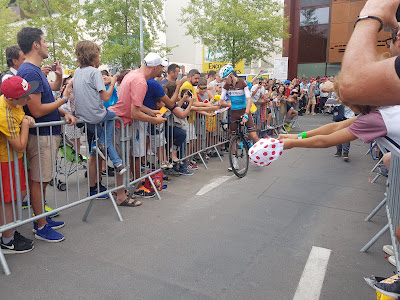 Unfortunately, Paddy Bevin hadn't made it through the tour, but the fourth NZ starter, Tom Scully, dropped by for a chat with Stu, who knew him well from racing in Canterbury. 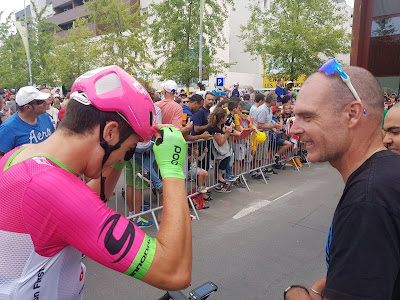 The crowd went somewhat wild, when current world champion, Peter Sagan arrived.  It was very cool to see perhaps the rider of this generation, and undoubtedly an all-time great, pass by only centimetres away.


We started seeing more and more riders filing past on the race route just down the way, and it was clear the riders were about to get going.  Sagan was on his way back, when I spotted a pen lying in the middle of the path, and just on the corner.  Being slightly OCD, I motioned to an official to move it - probably not a hazard, but you never bloody know.  He misunderstood, picked it up and gave it to me.

Providence perhaps.  I'd also plucked a Skoda-sponsored cap out of the hedge when we spectated briefly on the Stage 2 route.  When that was waved by Sarah at the Skoda-sponsored green jersey wearer, he stopped.  I handed her the pen.  She gave it to him.  He signed the cap.


The amazingness of it all was apparent, but it probably hasn't fully sunk in how magical that moment was.  When we caught up with Dr Fish, he noted he'd got signatures from riders 20 years ago, but I'm not going to let that diminish those precious moments watching the best riders in our sport get ready to do their thing. 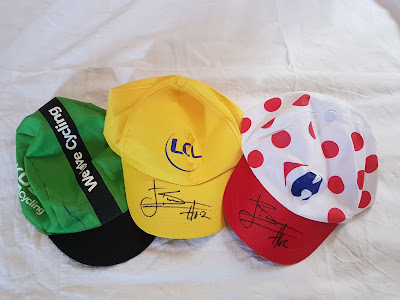 I'm about to return home, with some incredible memories, and a few incredible mementos.  It was a twist of fate that Sarah caught two caps flung from the caravan, that Jack signed both, and that together, we have two beautiful daughters.

I can't think of a better place for the green cap to reside than Oli's workshop - I've thought about him so much during this trip, not only because my bike has run like a dream, but also because I know he will  have been constantly thinking about me, riding the stage he'll watch on TV the next day.

Bromance is a wonderful thing, and I've developed a few new ones on this trip.  Relationships and experiences are where its at folks, but things from time to time embody those.

The stage start was the perfect way to round things off.  We returned to the hotel, and it was an emotional moment saying goodbye to Bruce and Stu, and Julie and Jonny in particular, people I'd all connected with, and will look to see in the future.  Sarah and I left together, and didn't seek out the race on TV.  I'd seen more than enough.

Signing off, from France.

This blog describes a fundraising project for the Mental Health Foundation of New Zealand.
To make a donation, visit https://events.mentalhealth.org.nz/fundraisers/sifter.  Any contribution, big or small is greatly appreciated, and will be put to good use by the fine folk at MHF.
Posted by sifter at 8:34 PM