After the short team time trial course for Stage 3, our second 200km stage awaited, and it would prove to be a day of two halves. 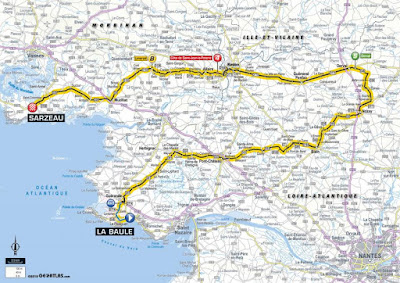 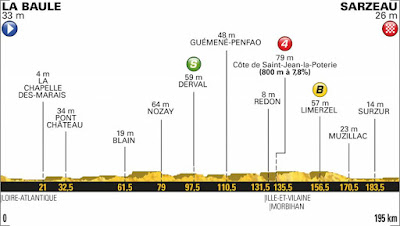 Our hotel was a few flat kilometres from the start, and so after a 6:30am breakfast, all our luggage got packed into the vans, and we rolled out just after 7:30.  One huge advantage of the early start was the lovely temperature - after baking in the recent afternoons, high-teens felt almost chilly.

Dr Fish observed, as we were leaving La Baule, that I was "like a little puppy", which I thought about for a while.  On reflection, having a naturally depressed mood tends to make things like this more amazing, relatively speaking, than they might appear in absolute terms.  That said, it is incredible how many pretty-damn-unique things we've already experienced only three stages into the tour.

As will be true no matter where we're riding (with the exceptions of city outskirts, I suppose), the scenery was lovely, and I there was definitely a lot more stopping for photos today.

There's plenty of Tour-related stuff littering the paddocks adjacent to the route.  It's clear where France's bikes go to die - they get painted yellow, or green, or pretty much any colour, and get strung up on a fence or lamp-post.

At one point we passed through a village which had a massive bike in the square.  We'd ridden past it, but decided to double back, only to find it had exactly eight seats.  What's more, we had Bill riding with us, so he was able to take a photo of the team-members on it.  A man opened up his window, and instead of shouting at us to clear off, started taking photos of us on his ipad, and gave us a lovely wave. 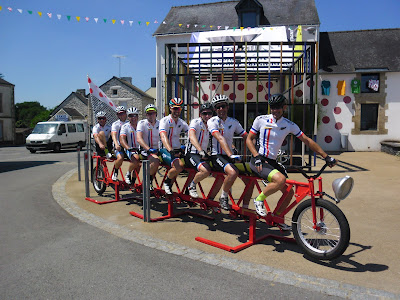 Not long after, Aaron had a tyre blow out, so we all found some shelter from the increasingly hot sun, and admired the church across the way.


The tube replacement lasted about 5 minutes, and it turned out Aaron's tyre had come away from the bead.  Bill sacrificed one of his tyres, while Mike played on the bike in the centre of the roundabout. 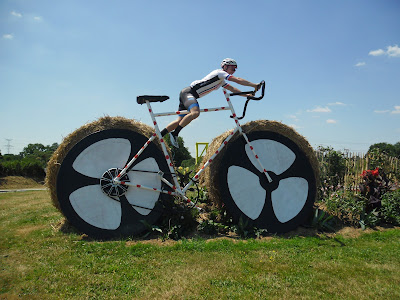 Stuey and I sat in the shade and waited patiently.

Despite a tail wind for much of the second half of the ride, the 209km took us just over eight hours, with just under 7 hours riding.  Garmin confirmed I spent another 2-hours coasting!!  I was feeling far from puppy-like by the end of it, and am looking forward to a reset overnight.

Tomorrow, things get considerably tougher, and if today's wind hangs around, Stage 7 into Chartres is going to be 231km into a block headwind...!  Bring it ON!

This blog describes a fundraising project for the Mental Health Foundation of New Zealand.
To make a donation, visit https://events.mentalhealth.org.nz/fundraisers/sifter.  Any contribution, big or small is greatly appreciated, and will be put to good use by the fine folk at MHF.
Posted by sifter at 8:45 AM