The final stage into Paris was short, but not without its challenges.  Firstly, we had to travel about 700km to get to the start, and then, we had to quickly come to grips with Parisian drivers. 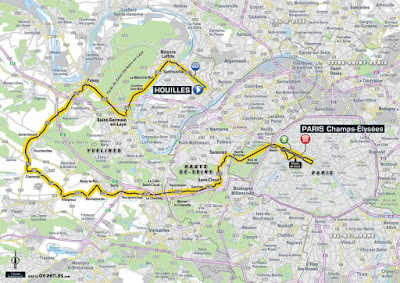 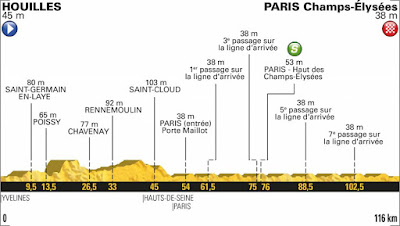 The transfer post-Stage-20 was meant to be simple, especially for us riders.  Roger left with the bikes as soon as they were packed in the van after the TT stage, and the two vans dropped us at the Biarritz railway station after we'd had a chance to shower.

Unfortunately, a fire in Paris had disrupted TGV services, including hours, and, long story short, around the time we were scheduled to arrive into Gare Montparnasse in Paris, we were boarding a regional train to Bordeaux.  By the time we arrived there, our crew had been waiting several hours, and with the TGV situation still not resolved, we were driven to Tours.  We managed 6 hours sleep, before knocking off the remaining drive in the morning.

The good news was that my tummy bug had gone as quickly as it had arrived.  By about 7:30pm, I'd begun to feel hungry, and the first food I'd eaten in 24 hours stayed put.  When I suited up for the ride, I was feeling well enough to enjoy it.

Jonathan had touched base with the women's manager, and they'd welcomed us to ride with them.  When we arrived at the start venue just before noon, it was clear that they were well organised, with motorcycle escorts.

It was nice to meet the Chargé d’Affairs, Roger Dungan from the NZ Embassy here in Paris, and he and his family gave us a nice cheer when we rolled out near the back of the peloton. 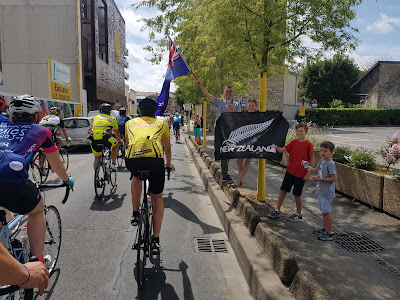 Aaron had an unfortunate puncture, but the rear motos not only waited for him, but also radioed ahead and the bunch was slowed by the forward marshalls.

There were a few scheduled stops, and the bunch grew dramatically throughout the ride. 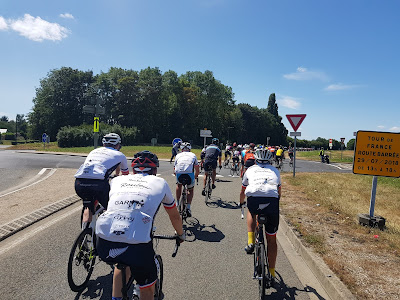 It was weird to all of a sudden be in a bunch of a few hundred, but when we reached Paris, it was clear that we were much better off in this peloton than we'd have been on our own.

It was also clear why the professionals choose to enjoy this final stage, rather than continue racing.  Of course the stage honours are on the table, but for us, and no doubt them, it was an opportunity to enjoy one another's company, and to reflect on the significant challenges that had been overcome to get to this point.

I'd ridden on the Champs-Elysees before, and so was prepared for it to be a frustrating affair, and one which seems at odds with the rest of the event.  After riding so freely almost everywhere else on the course, we were forced to stop probably more times on this stage than we'd been virtually the rest of the trip put together.

Because of traffic concerns, we weren't able to replicate the exact course at the end, and we only did one abbreviated lap.  But it didn't matter.  Riding 8-abreast with my riding buddies of the last three weeks was quite a hoot, and while the uneven nature of the road surface made it somewhat hard to hold our lines, it was a fun experience. 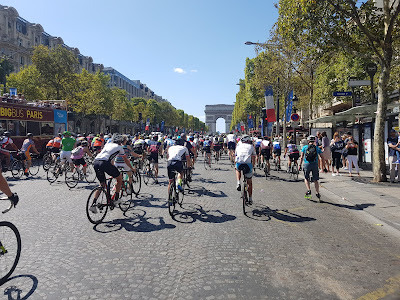 My dear parents were at the side of the road yelling, and I saw Sarah (for the first time since Pornic, the night before we started), just before we finished.  It was wonderful to be reunited with them all before the team and I rode back to the hotel.

As Paul so nicely put it:


By far the best part of the whole ride, for me, was the journey back to the hotel. Finally it was just us again, Team NZ, the average joe kiwis who had risen the whole damn tour. No entourage. I was free to smash the city streets of Paris just as fast as I wanted to go. Freedom on the roads. That is what cycling is about, that is why we do it. Fully unencumbered. It felt so good. I’ll remember the journey back to the hotel with team far more fondly than Stage 21 itself.

It made me realise I'd felt similarly, and it was one of many insights gained during this great opportunity to reflect on an amazing riding experience.  More on that another time.

This blog describes a fundraising project for the Mental Health Foundation of New Zealand.
To make a donation, visit https://events.mentalhealth.org.nz/fundraisers/sifter.  Any contribution, big or small is greatly appreciated, and will be put to good use by the fine folk at MHF.
Posted by sifter at 7:25 PM