Having successfully completed 15 stages now, including some with a fat stack of climbing, we've become acutely aware of the importance of a hill top finish, or in this case, the lack thereof.  This 218km stage into Bagneres-de-Luchon was all effectively shortened in our minds because during the last 10km, we'd barely need to turn a pedal... 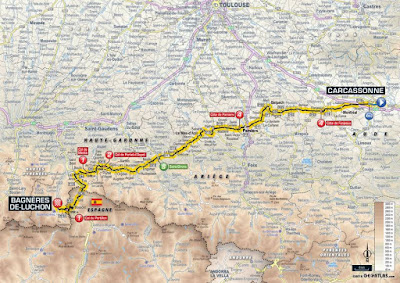 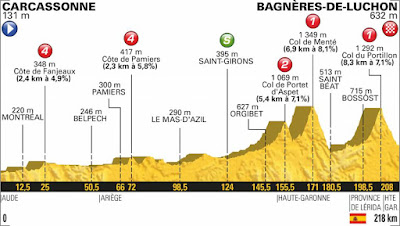 We'd spent two nights at a very nice backpackers only about 10 minutes drive from the stage start.  After the rest day, it was slightly challenging remembering what needed to be done in the morning, but ironically, we were ready in record time.

One downside of being early, was that we got ahead of the signage guys, so Mike had to navigate for us initially.  While we'd passed one crew, they'd obviously been given the responsibility for the route out of Carcassonne, while others had started their work on the outskirts.

Sunflowers were in abundance, on both sides of the road, and after about an hour or so, we got our first glimpse of the Pyrenees!

We had our first break just before Pamiers, and I had a lovely surprise waiting for me when we passed through the town - my parents, who are currently staying in Toulouse, had set up on the side of the road, and gave us a good cheer as we rode past.  I really wanted to pull a u-turn and spend some time with them, but they shouted "keep going"!  When the van passed us soon after, I was hoping they'd organised to be swept up, but alas.

A wonderful natural surprise cheered me up soon after.  We came around a bend, only to see the road disappearing into a massive cave!  I recorded a video while riding through it, and it took us just over a minute!  It was quite amazing, and the road both climbed and wound around.

We'd passed the women in that first hour, but one weird implication from the rest day was that we all needed to stop for a pee at alarmingly regular intervals!  So, we never really got too far ahead of them, and at about the 115km mark, we joined their group of about 30, and stuck with them through to our next food stop in Saint Girons. 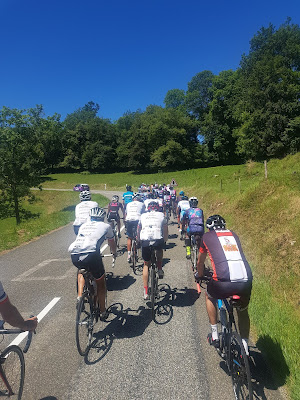 Once we'd finished lunch, it was into the serious climbs - first up, the Cat.2 Col de Portet d'Aspet, which I'd ridden in the opposite direction in 2013. As we were starting the false flat up the valley to the base of the categorised section, Aaron punctured.  I initially waited, but then realised I was adding little value, and rode after Stu, Bruce and Paul.  The four of us made our way over the col together, stopping briefly at the top for water, and at the Fabio Casartelli memorials on the way down. 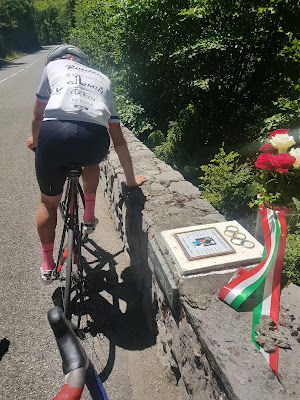 At the bottom, we turned left onto the Col de Mente.  The highlight of this for me was seeing Didi Senft, who is regularly mentioned in stage commentaries.  Unfortunately, I couldn't convince him to jump up and down for me, but he was happy enough to be photographed with me. 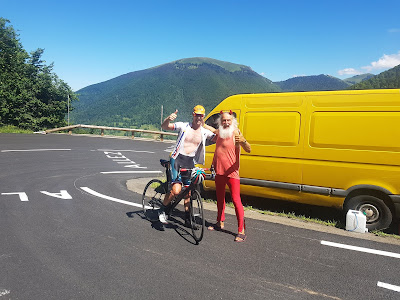 We had another feed at the top, and all regrouped.   Stu was finding the heat much more manageable after a shave, but Mike was suffering today.  Bruce too is unwell, but was soldiering on, in impressive fashion.

The descent was uneventful, and then began another false flat section through to the base of our final climb, the Col du Portillon.  At a river crossing, there was all of a sudden a big sign reading "ESPANA", and lo and behold, we were in Spain! 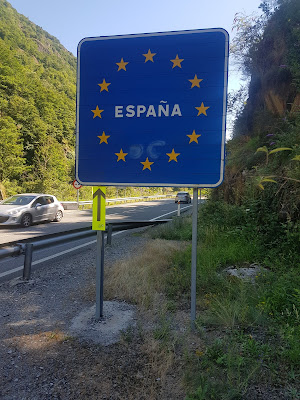 The stage finishes back in France, at Bagneres de Luchon, but if we rode there, our support crew would have to drive over the Portillon, pack us into the vans, drive us all back over the way we'd just ridden, only to head back over once more to the stage 17 start in Luchon in the morning.  I suggested we simply ride back down the Spanish side to our hotel in Les, saving a whole lot of driving, and finish the stage in the morning.  There may be a small issue with that, as we saw Spanish police closing the road this evening.  I don't think anyone is going to lose any sleep over it, and the descent we did is certainly equivalent to what we were supposed to do, effort-wise (i.e. virtually none)!

This blog describes a fundraising project for the Mental Health Foundation of New Zealand.
To make a donation, visit https://events.mentalhealth.org.nz/fundraisers/sifter.  Any contribution, big or small is greatly appreciated, and will be put to good use by the fine folk at MHF.
Posted by sifter at 8:09 AM