The first rest day seems like a very long time ago, and only one stage stood before us and the second - we'd be riding into Carcassonne, and, unlike the huge transfer between Roubaix and Annecy that awaited on Day 10, we'd be staying put.  We would have considered the route a challenging one a few weeks ago, but our perspectives have been well and truly skewed, and this 185km parcours, with just over 3000m of climbing, looked like a chance for some recovery...! 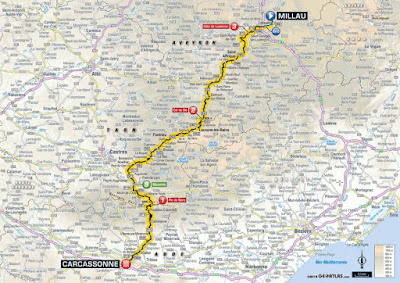 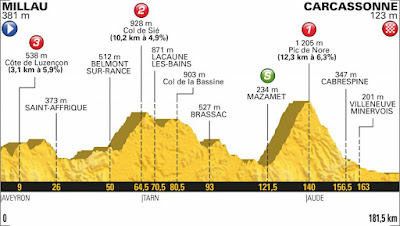 After breakfast, we had an 80km transfer to contend with, but on a highway with a 130km/h speed limit.  As we approached Millau, we got our first glimpses of an incredible viaduct - my brother Dave had either seen it himself, or knew about it, and I was forewarned that it would be amazing.

The more time I spend here, the more I like the French - I've seen no sign of the rudeness people complain about.  On the contrary, people seem really patient with us both on and off the road.  An old dude that gave way to us at a roundabout broke into a lovely smile when he saw us all on our bikes.

For the best part of 10 minutes, we had great views of the massive bridge.  The highlight was on the approach, where the French had seen fit to warn us of the clearances!!!

As with many of the roads we'd ridden, the commitment of these people to get from one place to another, whatever the engineering challenges between, is quite something. 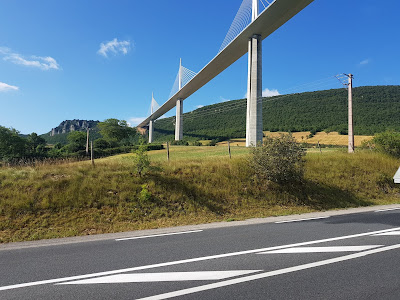 While most of the boys stopped for a wee, I rode on, and spent about 15 minutes chatting to Bruce.  I'm used to New Zealand towns being in "convenient" places, i.e. near a water source or crossroads, whereas here, you often get the sense they're in locations that are easy to defend!

With the rest day looming, the mood in the group seemed lighter than usual, and there was a lot more talking.  It helped a lot that the roads were fairly quiet, and that we've by now learnt to cruise whenever possible.

Part way up the Cat.2 climb, we met a French woman who'd just got rolling after a wheel change.  I was with Mike, Bruce and Stu, and was somewhat dismayed that she wanted to go a bit faster than we'd been riding, and that of course we had to keep up.  Fortunately, she either tired, or realised that her pace was too high, and we all slowed down a bit.  Not long after, we caught up to their main field, and it was nice to chat with them - they seem just as tired as we are, but are otherwise doing well (no mean feat, since they're spending an hour or two more on the road each day than we are).

We ate near the top of the hill, and then bombed down the other side.  I hadn't done my homework, so didn't realise until after that I'd ridden a 20km stretch of this road in the opposite direction, back in 2013.

Passing through Mazamet was our last act before the Cat.1 ascent of the Pic de Nore began.  Initially, it was in a lovely valley, which at one point had about 20 bikes strung up on a cableway high above the road.

After about half an hour in the valley floor, the climb turned off, and both the gradient increased and the road surface deteriorated.  On the other hand, we were in the shade most of the time, and the air temperature was much cooler than we've experienced (sub-20 degrees, at times).   I rode with Stu and Paul, and aside from a break about half way up, the climb was gloriously uneventful. 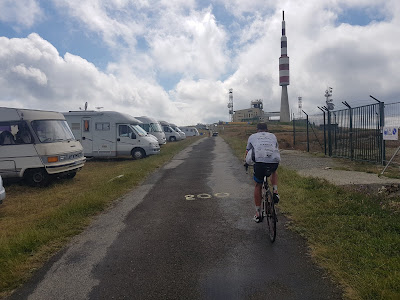 There was a cold wind blowing at the summit, so after donning jackets, we didn't hang around.   The descent was pretty gross, largely due to the road surface and the amount of traffic.  But, we got down well enough, and all that remained was about 25km into Carcassonne.  Luckily, the Arnesen express was heading our way, and despite shitty wind, Stu, Aaron and I were well sheltered all the way through to the stage finish.

It was good to knock off our 15th stage, and particularly with everyone under their own steam.  After the rest day, we have another six stages, and we're all very wary of the first four of those.  We have over 2500km on the clock now, but the end is in sight.

This blog describes a fundraising project for the Mental Health Foundation of New Zealand.
To make a donation, visit https://events.mentalhealth.org.nz/fundraisers/sifter.  Any contribution, big or small is greatly appreciated, and will be put to good use by the fine folk at MHF.
Posted by sifter at 5:52 PM