The rider I took a selfie with was Bernard Hinault, of course (and, I have to say, it looks much more like him in yesterday's photo, than the statue did in person)!!

We woke praying to god that it wasn't going to be a howling easterly wind for the tour's longest stage, a 240km monster from Fougeres to Chartres.  I was pretty excited to be finally riding into a place I'd been to in my 2013 Cycle-Tour de France. 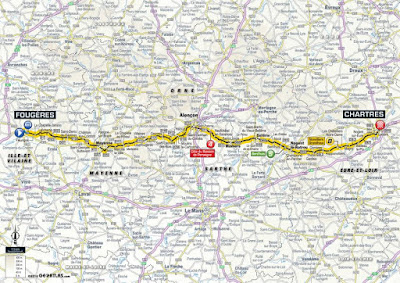 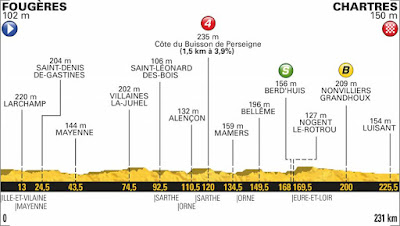 Our hotelier was slightly unimpressed with our request for breakfast at 0630, but we were well fed then nonetheless.  We had about a half-an-hour drive to Fougères, which was as beautiful as the posters we'd seen in Nantes had promised.

Once we'd parked up, we were met by Sheri, who is a fellow Wellington Masters Cycling Club member.  She wondered if she'd be able to tag along with us to Chartres, and Jonathan was happy to accommodate her.

Luckily, the route wound its way through some of the more scenic parts of Fougères, and I gather Matty had a field day with the drone!

The wind was not coming from the worst possible direction, but it wasn't far off, and for pretty much the whole day we were dealing with the wind crossing over the road (or coming right at our faces).

Our first hour was pretty slow, and no sooner had we passed the French women and yet another huge peloton, than Bruce was slowed by a puncture.  A few older locals had hitched themselves to our bunch, and were hollering "crevaison" at us.

Mayenne was another pretty city, necessitating a quick stop for photos... 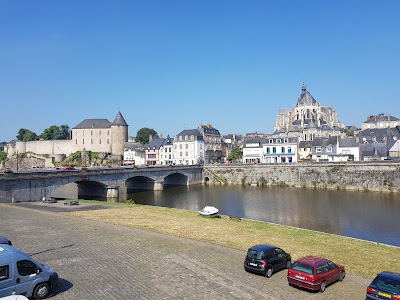 We've had some pretty stunning scenery the last few days, and in contrast, passing through endless fields into a head-cross wind got a bit tedious.

The women had obviously been in the media, since there were quick large crowds waiting for them in many of the towns in the second half of the route.  Some seemed very happy to see us, while others frowned over the top of their cameras, apparently unimpressed that we'd almost had them clapping by accident.

Just about everyone responds to us positively though, and it feels really nice to have people shouting positive things after us - a stark contrast to typical attitudes towards cyclists at home.  I noted two young boys, perhaps 10 years old, who seemed incredibly excited to watch us pass.  I imagined them wanting to be pro-cyclists when they grew up - there definitely seemed a romantic attachment to what we were doing, and it was very cool to see. 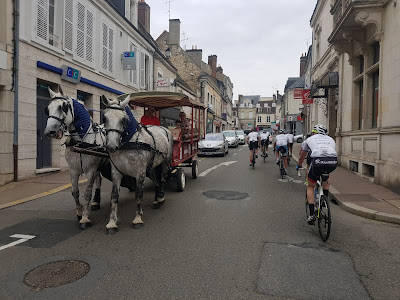 The team seems to be functioning really well, for the most part.  I definitely feel very comfortable from a safety point of view, and was super impressed with the work done by almost everyone today.  A couple of nights ago at dinner, Jonathan said that his aim was to get us all to Paris, and it would be nice to think each of us has that aim too - the group was always pitched as a team, and as such, we're all there to look after one another.

For my part, I spent a bit of time in the wind, and also gave Aaron a helping hand up a few of the rises. We had a slight downhill run into Chartres, and it was really cool to see him hammering into the wind with us all tucked into his wonderful wind shadow.  Knowing him, he would have been proud of his work, and glad to contribute, and it put a smile on my face.

In all, we covered 239km in 9.5 hours elapsed, with an average moving speed of 28km/h.  For a profile that looked pretty flat, there was a surprising amount of climbing - nearly 3000m again, but well spread out over a lot of road.

We get a slight sleep in tomorrow, and will then crack into our last "easy" stage for a long while...

This blog describes a fundraising project for the Mental Health Foundation of New Zealand.
To make a donation, visit https://events.mentalhealth.org.nz/fundraisers/sifter.  Any contribution, big or small is greatly appreciated, and will be put to good use by the fine folk at MHF.
Posted by sifter at 8:12 AM