For the pros, the Stage 20 individual time trial has the potential to shake up the General Classification, but for us, it was an opportunity to wind down and begin our cruise to the finish. 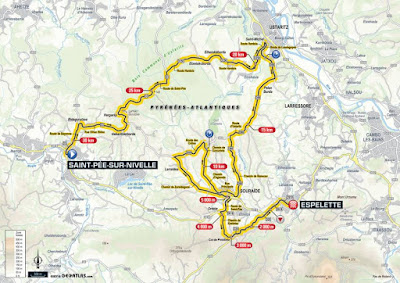 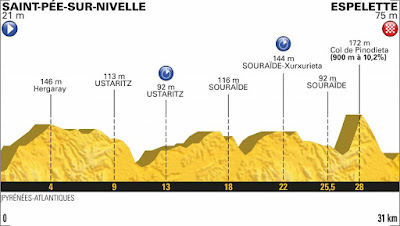 The previous night, we’d arrived at our accommodation just after 11, and I was showered and in bed just before midnight.  Not 15 minutes later, I started getting stomach cramps, and soon after that the fireworks started.  Luckily, the rear end finished by the time I started bringing up my dinner, but all in all, it couldn’t have been a much more unpleasant few hours.

I probably got about 4 hours sleep before my alarm went, and when I joined the team for breakfast downstairs, all I could manage were a few sips of coffee and half a glass of apple juice.

At the appointed departure time, Stu and Julie bundled into my room to find me curled up in the foetal position on my bed.  Stu took charge and not only ordered me to get up and dressed, but also draped a wet towel over my head, and started forcing me to drink.  I was in lala land, a combination of the diaorrhea and vomiting ordeal, the lack of sleep, and possibly even that my daily antidepressant medication had been ejected into the toilet.

I staggered downstairs, and had to laugh when Aaron shouted across the carpark that I’d kept everyone waiting!!!   I rode without a cap (and it was nice not to have to put sunscreen on), and while my legs initially felt OK, I had this horrible knot in my stomach and felt like I was about to throw up for the duration of the ride.

Aaron was just in front of me, and was constantly checking on my position, and relaying forward requests to speed up or slow down.  Stu was hovering behind, and every now and then would push me up to Aaron’s wheel if I’d drifted off it.

It was a fascinating TT course – a great surface throughout, but a lot of climbing.  There were a couple of heinous pinches in the last 10km, and by this stage, the fact that I’d ejected most of my dinner the night prior, and had no breakfast started to rear its ugly head.  Halfway up what was probably the steepest section of road of the entire tour, I had to pull off into someone’s driveway to rally my forces, and I had to make yet another stop before it was all done.

Paul was a great help over those last few kilometres and seemed to be delighting in pushing me up stuff!  On one steep stretch, he was on one side and Stu the other, and I honestly don’t know if I’d have been able to get through without them.

At the end, I felt terrible, but there were no more signs of trouble from my digestive tract.  I realised I’d dodged quite a number of bullets – had that happened a day earlier, there’s no way I could have got over the mountainous route of Stage 19.  I’ll be eternally grateful to the team for not just letting me sleep it off, and in many ways, having this bad day, and being beneficiary of the support of the rest of the guys, was an enriching experience.  As Paul said when I thanked him for his pushing: “just returning the favour”.

The dramas of the day were not over – our TGV from Biarritz to Paris was cancelled due to a fire in Paris, and rather than arrive at our hotel at 7pm, we ended up on a regional train to Bordeaux, and a van drive through to Tours.  The bug which hit me seems to have gone as quickly as it came – I finally felt hungry at about 8pm, and what I ate then seems to have stayed put.  I’m back to feeling usually tired, rather than abnormally so!

One stage remains, but this was a stark reminder that the show isn't over until the fat lady sings.

Strava:  only 33km, but probably the toughest ride of the tour for me.  Strava has the steepest section of the course at a whopping 26% for 450m!!!