Today's the day where it's tempting to put the altitude profile first, because we're now in the mountains, and it is the climbing we're doing that becomes the most interesting part. 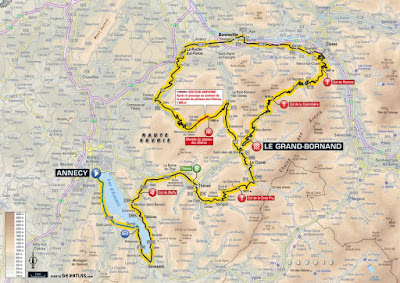 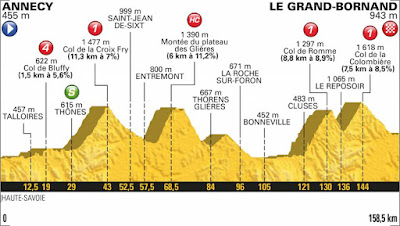 Our day started with a half-hour drive from the outskirts of Geneva (though back in France), through to Annecy.  After yesterday's day off, the established routines were slightly rusty, and we rolled out at 0830 - about 15 minutes later than our target.

While the stage was billed as 158.5km, the organisers treated us to a 13km warm up, which we resented a little.  That said, we were treated to some stunning sights of the city initially, and then the lake.

We despatched the first two small climbs without too much fuss, and then after a short trip up the valley through Thones, we were onto our first Cat.1 climb of the tour.

The traffic on the climb was moving slowly, and for a while I wondered if we'd be sucking in exhaust fumes the whole day.  Once we passed a stalled car who'd blown a gasket, things eased, and it seemed that the French women up the road were slowing things down a bit too.  I passed one, who was wearing "DO EPIC SHIT" socks.  I said "your socks are good" in French, only to find out later that she's American!!

There were a few folk camping out on the climb.  I was particularly impressed with the effort one fellow had gone to ensure his bed was level, and regretted not stopping for a photo for about 150m, before turning around... 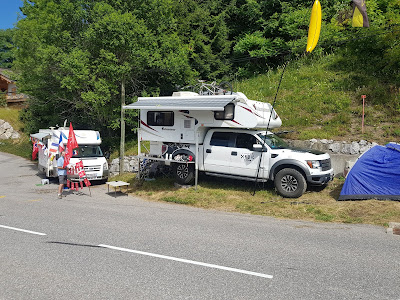 We had a feed at the summit, and it was nice to see a NZ flag flying on one of the campervans.   Apparently our crew had suggested they wait for us and give us a cheer, but alas, they had a cafe to go to!

After a fast drop down into La Clusaz (I'd donned my rain shell, only to find it was plenty warm), we had a battle with a headwind for a while, and it did a fine job of neutralising the last part of the descent.

There were Gendarmes preventing cars from going up the Montee du plateau des Glieres, though unfortunately they didn't stop us!  The first kilometre was pretty mellow, but then it kicked up to 12-13% right through to the top.  It was super hot, and hard to stay on top of my 36-32 granny gear.

About two-thirds of the way up, we were passed by a fellow in Global Cycling Network kit, who had the unmistakable voice of Simon Richardson (when told by Steven what we were doing, he reportedly said "you're fucking crazy"!).

One of his companions slowed and offered some encouragement, and then pulled away.  I heard Simon call him Frank, and realised it had been none other than Fränk Schleck - many time Luxembourg national champ, tour stage winner, and with a third place overall to his name.

Luckily, he'd been asked to ride the top 250m for a second time, so when he pulled to a halt at the top, I called out his name, and told him that Phil, Mike and Nick from Wellington had recently done a tour with him ("Oh yes", he said, "that was cool!").   Stuey told him we'd all been coached been Hayden, a former team-mate of Fränk's.


Before we set off, I asked if I could take a selfie, which was beautifully photo-bombed by Stu!

The next few kilometres were unsealed, but you could barely tell, and it was all very pleasant (especially since the climbing sections were single-figures). 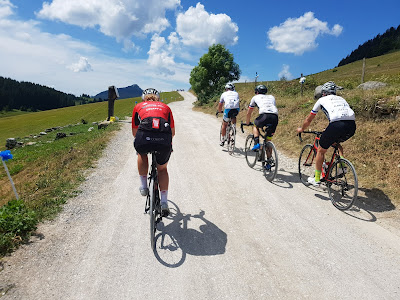 Another rip-snorter descent followed, and I managed to get the photo I was after on the third switchback down. 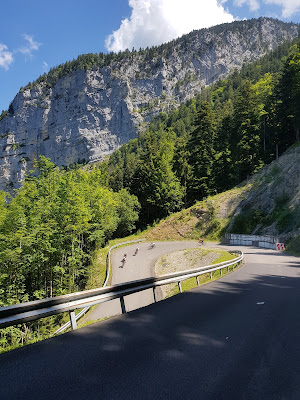 We had a brief stop in Thorens-Glieres when Steven's cleat started coming loose.  Luckily, Bruce had an allen key, and the missing bolt was located on the footpath where it must have fallen when Steven had unclipped.  Lucky save (on both counts).

Then followed a climb which the organisers hadn't deemed worthy even of Cat.4 status, and over the other side of that we found ourselves in a very wide valley quite unlike the steep glacial valleys we'd ridden in so far.  It was a wonderful surprise to see Aaron, who'd done an outstanding job getting himself over the last hill, and it was fun to ride with him through to our second feed stop in Bonneville.

After Bonneville, I made the fatal mistake of chasing Dr Fish, and paid for it dearly when we hit the climb of Col de Romme.  It was nice to be back on this spectacular road, having ridden it in the reverse direction on 3 July 2013.

Stu, Steven and I were joined by Glenn Rewi, who helped take my mind off things for a bit.  He managed to convince Steven to ride the climb seated in his big chain ring, and Steven did a great (if not foolish) job of lightening Glenn's wallet.  To Glenn's credit, he let Steve off the hook well before the summit.

Near the top, Matt and Cam went past in the van, and I handed them a full 1L bottle, immediately noticing the difference.

Unfortunately, I'm a bit dumb, and when I'd finished grovelling up the Col de la Colombiere an hour or so later, I once again had a full bottle in my cage...  I'm still not used to this supported-lark. 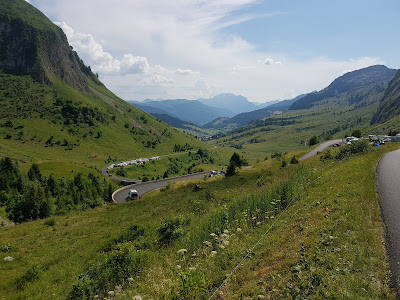 I really buttoned off and used the descent to loosen up my legs, and after a lap of Le Grand Bornand, was getting ready for the drive to the hotel.  Stu, Jason and Steven were already there when I arrived, and everyone else was there within 25 minutes or so.  Bloody impressive how we're all holding up.

By virtue of today's rest day, there was a lot of activity at the finish line, but alas, not the finish line itself.  It just goes to show how magic it was to be able to ride it on our first day, and we can now add meeting a celebrity to that and our tour of the Roubaix showers to our list of remarkable bonuses.


In all, we rode one HC climb, 3 Cat.1 climbs, a few small ones.  We covered 171km in 8h20, with just over 3850m of climbing.  If there'd been a bike shop at the finish line, and our mechanics hadn't spent all day yesterday driving, I'd have snapped up a 34-tooth chain ring (or an 11-34) cassette.  But, I'm going to see how I go - we have two big mountain stages yet to come, but the average gradients are lower, and I'm not going to do anything silly any more...

If you have access to tour coverage, the Montee des Glieres climb is an absolute cracker.  It might be too early in the stage for the race to blow apart, but the top is very beautiful (as well as the road being hard).  Highly recommended (unless you're on an under-geared bike, with fairly tired legs)!