The day started with a half hour drive from our accommodation to the start in La-Roche-sur-Yon.  Being Saturday morning, and relatively early, it seemed everyone was still inside - this was to be a theme for the day really, and it took me back to 2013, where I never felt like I understood how the French live.

The stage which beckoned was 186km, shorter, but a little bit more lumpy than Stage 1. 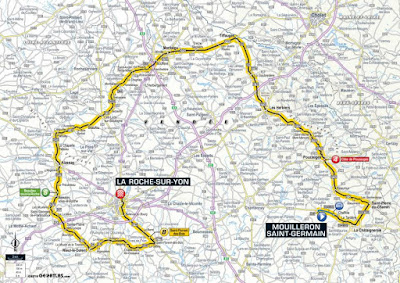 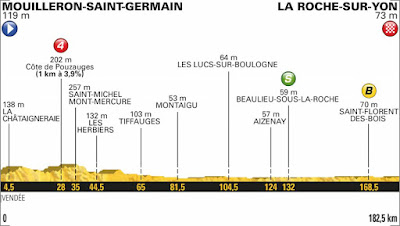 The bonus of the rolling countryside was views, which we'd not really enjoyed yesterday - nice enough on the bike, and even better when emptying ones bladder.

We made our first team photo stop, at a wee village which had spectacular ruins of a castle.  One downside of this format, is that there's no note taking, so I have no idea which village it was in!  In any case, it was pretty, and it was totally appropriate that we all wanted to stop to admire it for a bit. 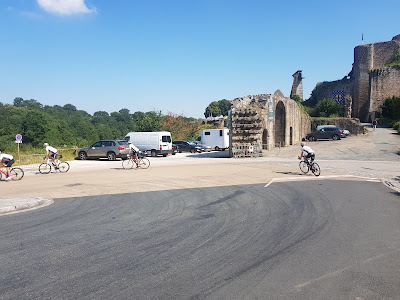 We had our first food stop at about the three hour mark, in Montaigu.  My family had spent the night in Nantes, and they'd always planned to come out on the train to wave as we passed.  Jonathan kindly agreed for them to hang out in one of the support vehicles, so while they didn't see us ride by in Montaigu, they saw a lot more of us over the next 100km.

While we were having lunch, the French women rode past, with about a dozen supporters on bikes.  We gave them a big cheer, which they seemed to appreciate.  We caught them within an hour of setting off - I'd been surprised to learn from my folks that the course marking vans were only just ahead of us.  Unfortunately, they'd chosen the same picnic spot as les elles au vélo, so for a while, we had to revert to using the GPS map Jonathan had made.

On the other hand, we were treated to our first Kiwi fans, complete with All Blacks and New Zealand flags, and a lot of hollering and hooting. 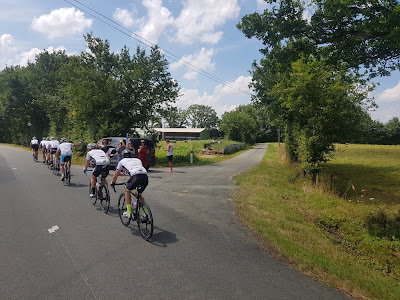 Our second and final break was at the 120km mark, and after parking the bikes, we retired to a very quaint local cafe for cold cokes, and espressos.  My family joined us, and Mum had a great old yarn in French with the lovely barkeeper, who promptly forced and aperatif on her (and one for Pops, too), 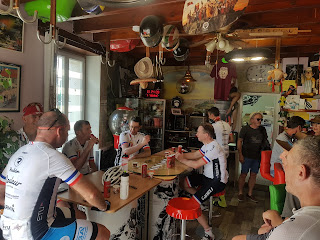 We strolled back to the bikes, past a pretty average village church... 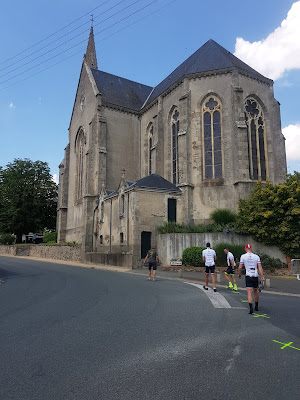 The stop had been perfect, particularly since the route markers had passed us by, and we were subsequently able to navigate much more easily.  We passed the third vehicle, who seemed to be putting up signs which weren't the main route markers, but we never did run out of the wonderful fluoro arrows. 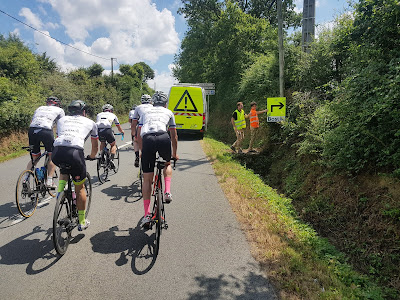 Nearing the end, we paused briefly, and Stu had a chat to some fans who were camped out on the side of the road.  Though it should have been obvious to me last night, the hundreds of campervans we'd seen on the side of the road yesterday, weren't waiting for us, and they were still on the Stage 1 route, watching the real Tour go by. 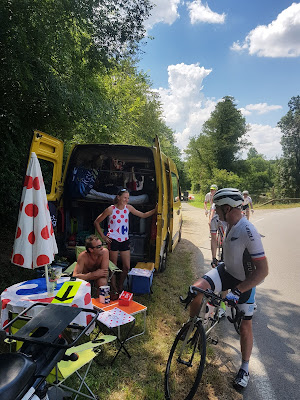 It was a bit of a convoluted finish, and it was quite an anti-climax to discover the finish line was non-existent.  Our theory now is that there's only one of those, so yesterday's incredible ride up and down the final 150m might have been a once-in-a-lifetime thing.

On the other hand, the course marking vans were there, and I managed to get about 15 arrows from them which I distributed among the team and our visitors.  Just about every campervan we see has one in the window, and it seems a good strategy to give these away - it probably avoids people pinching them before the race comes through.

Sadly, I had to say goodbye to the grandparents (who we may see in the Pyrenees), and Sarah (ditto, but certainly in Paris), and the grandgirls, who tomorrow are flying with Sarah to London, and heading home after a couple of nights there. 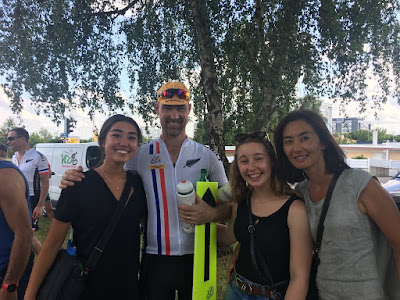 It truly was an incredible gift seeing them today, and for them to be able to witness the team and I doing our thing.  They won't get to see the real peloton this time around, but they lap France every year, so everyone will just have to come back here some day.

The team and I covered 187km in 7h15, with an average moving speed of 30.1km/h.  There was another token Cat.4 climb on today's stage, but the real hills are yet to come.  Nonetheless, the little bumps added up to about 1600m over the day.

We had a long drive to Pornichet, and will be doing a 250km round trip to Cholet tomorrow for out Team Time Trial stage.  Stage 4 starts just down the road from our hotel though, and it will be nice not to have to pack the bags in the morning.

This blog describes a fundraising project for the Mental Health Foundation of New Zealand.
To make a donation, visit https://events.mentalhealth.org.nz/fundraisers/sifter.  Any contribution, big or small is greatly appreciated, and will be put to good use by the fine folk at MHF.
Posted by sifter at 8:30 AM