Three hors categorie beasts, plus a side trip up the lovely Lacets de Montvernier, that Sarah introduced me to five years ago. 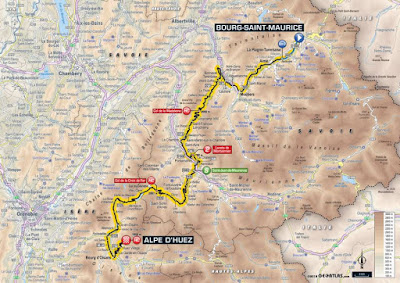 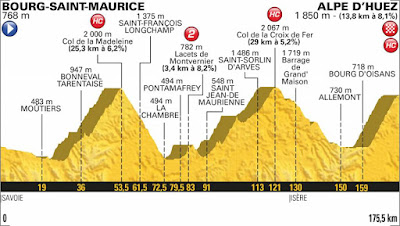 We woke in a small village high in the hills about Bourg-Saint-Maurice, and after a big breakfast buffet drove down the hill to the stage start.  It felt a bit wrong not riding, but fortunately there was a tiny bit of climbing in the road to make being in the vans seem worthwhile.

The first hour or so was spent going downhill, but that delivered us to the bottom of the Col de la Madeleine, a 26km climb.

After doing a lot of work at the front in the valley, Jason shot off as soon as the climb began, and it was good to see Paul had recovered well.

I was feeling OK, and enjoyed stopping to take photos from time to time - the surroundings really were quite stunning.

Towards the top, there was a random snow drift, which had been hollowed out by a stream.  The air was already very warm indeed, and it seemed somewhat inconceivable that the snow hadn't melted by now.

Our crew had set up our first meal break at the summit.  Jason had got there almost half an hour earlier, and had started to get cold, and headed down already.

After a feed, and refill of my two 1L bottles, it was time to roll down myself.  I remembered lamenting not taking a photo of the Col from below the ski-village, but had to focus on the road, and didn't look over my shoulder at the right time, obviously.  The one layby I did pull into had a pretty lousy view, which wasn't worth hauling the bike in for.  Before the descent was over, the air temperature had gone up so much, I had to stop to take my jacket off - I remembered freezing on quite a few of the long descents, but I haven't been even slightly cold yet on this trip.

Next port of call were the Lacets de Montvernier.  Mike came past me just as I was starting the flat section through to the base, but I decided against trying to hold his wheel - he'd struggled on at least one day in the first week, but is absolutely flying now.


Matt had crashed the drone on the Madeleine, after getting confused when an identical drone was in
the air at the same time.  I'd really talked up this climb as an ideal one to film from the air, and was delighted to hear the drone above, and spot him down below piloting it.

The engineering that went into this road is just remarkable, and it was a special climb, thinking back to Sarah's recommendation very early in our relationship.

The next fuel stop was at the top, and though it seemed a bit soon after the previous Col, the next opportunity would be hours away, so I dug in.

On the descent, one of my bottles hit my leg, alerting me to the fact that my bottle cage bolts had come loose.  I put the full bottle in my pocket, but couldn't get my fat fingers around the bolts to tighten them at all.  Luckily, Bruce caught up to me before either fell out completely, and came to the rescue with the Allen keys he'd been carrying.

While I'd ridden the Madeleine in 2013, in the opposite direction, the climb of the Col de la Croix de Fer was completely new to me. I hadn't studied the profile well at all, and instead had latched on to the relatively modest average gradient.  Unfortunately, there were a number of short descents in it, which meant that often the road was pretty darn steep.

Matt and Cam were waiting a few kilometres from the bottom, and it was an opportunity to ditch helmets and refill bottles.  The temperature seemed to be hovering in the low 30s, which is manageable at 30km on the flat, but was quite overbearing at 10km/h on a tough climb.  There was little shelter, with a tunnel being a rare exception!

As I rode into Saint-Sorlin d'Arves, I was fantasising about a cold can of coke, and lamenting not carrying any cash with me.   Moments later, I was flagged down by Matty and Cam, who had iceblocks!  I had lost any interest in trying to climb fast, noting in previous days how I paid subsequently for going too hard.  So, it was bloody nice to sit in the shade, and savour the cold treat.  Bruce did a u-turn when he heard me shout "ICE-BLOCK" after him when he passed.

The upper reaches were just a matter of turning the pedals, and trying not to think too much about the scale of it all.  There were a number of campervans, and plenty of other cyclists to admire.

The whole team got back together at the summit.  Jason had been waiting quite some time, but was suitably clothed, and seemed in good spirits.  We had another good feed, and Jonathan got a round of coffees from the cafe there.  The Europeans do some things really well, and while the coffee was perhaps not to Wellington's standards, the fact that there was a cafe there at all, deserves some praise!

The descent was another cracker, and it was fun to be in amongst team-mates.  I rode a lot of it with Stu, and an old racing-buddy of his, Alex.

I was particularly looking forward to seeing the Lac de Grand Maison - the backdrop of my favourite riding photo, and the descent was a nice opportunity to better understand why there's a climb in the middle of it - the old road passing beneath a massive slip is not easily seen from the climb...

We all regrouped at the turnoff to Grenoble, and rode off together - Bill, Cam, Roger and Jonathan were all riding with us, while Julie and Matty were going to try their luck driving to the top of Alpe d'Huez.  We all agreed that it would be cool to ride the whole climb as a team.

Naturally, photo stops, and the quest for cold water to dunk one's head in, caused a few splits from time to time.  I was feeling better than I had on the Croix de Fer, so helped Aaron out a bit on the lower stretches.  I'd totally overestimated the number of people that would be on the hill, and was surprised with how sparse the campers were.


With about 6km of the 14km climb still to go, there was a bit of confusion as to who was where, and it meant Aaron and I got ahead of everyone, even despite stopping to chat with the occupant of a van flying a NZ flag.  When Stu arrived, he was in a pretty bad way, having overheated.  That triggered a wonderful experience for us as a team.  Those that still had a bit of get up and go helped others that didn't, and within an hour, all eight of us were at the top.  It was a wonderful thing to be part of.

On the way down, we saw the women between corners 21 and 20.  I stopped on the side of the road and clapped as they passed, knowing full well they would be on the road for at least another hour - by this stage it was well after 8pm (and finally a decent temperature), so it would be a very late night for them.

I couldn't hold Bruce's wheel back to the vans, and spent the drive to Grenoble fretting about very sore knees.  For the first time in this trip, I didn't have the energy to write about the day on the evening.  The long day had most definitely taken its toll, and I suspect the emotional conclusion had too.

This blog describes a fundraising project for the Mental Health Foundation of New Zealand.
To make a donation, visit https://events.mentalhealth.org.nz/fundraisers/sifter.  Any contribution, big or small is greatly appreciated, and will be put to good use by the fine folk at MHF.
Posted by sifter at 9:10 AM