The second alpine stage looked like a good opportunity to recover somewhat between some very steep climbs in Stage 10, and a long and epic stage the following day. 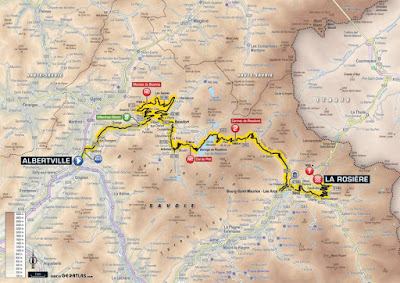 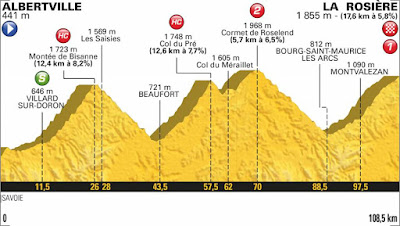 We had a fairly leisurely start in the morning.  For one thing, we were staying about a kilometre from the stage start, but more to the point, so too were the signage guys, and even though the route through the mountains is fairly obvious, the hundreds of fluoro signs they put out each day make life a lot simpler, and much less stressful.

While the bikes (and their riders) were getting organised, as always, Matty was on the look out for something to film... 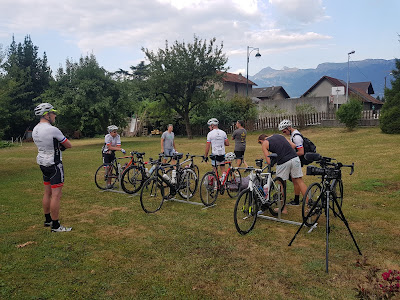 After about 5 minutes' riding through Albertville, we started the gradual climb up the valley to the base of the first HC climb of the day, the Montee de Bisanne.  When we made the turnoff, I notice a sign reading 4km to Beaufort, where we would end up in a couple of hours.

I'd sworn to myself that I would burn no matches today, and so cruised the entire ascent.  When the gradient was at its steepest, I'd get out of the saddle, or when I just wanted a change of position.  Even though the 1000m ascent took ages, it was amazing how quickly you climb away from the valley floor. 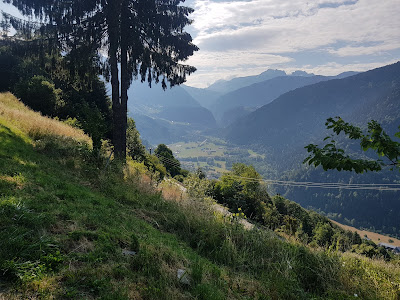 Our support crew were waiting for us at the top, and we had a good morning tea - Roger has introduced us to cream cheese, ham and honey rolls, and they slide down very nicely indeed.

The descent was over pretty quickly, at which point lightweight jackets went back into pockets, and the climbing began again - first gradual, and then not, as the second HC climb of the day began in earnest.

There were many cyclists out on the Col du Pre, and the views back down into the valley were stunning.

Near the top, Steven and I got chatting to a Londoner named Andy, who was about to go to race the Tour du Mont Blanc (330km and 8000m of climbing, OMG).  We were buzzed by Matty's drone as we neared the Col, and soon after found our lunch waiting.  Delicious once more, but with a cool wind blowing, the advance party set off just as the band at got back together.

While I hadn't manage to find footage of the Dauphine stage which was almost identical to our route, I was very much looking forward to seeing the Barrage de Roselend - a hydro dam way up here in the mountains.

It didn't disappoint, and I couldn't help but say "WOW" when the lake first came into view. 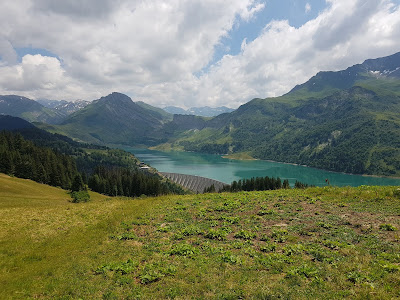 We had a short descent, interrupted by various photo stops, and then crossed the top of the dam - perhaps the only sustained section of flat road in the day. 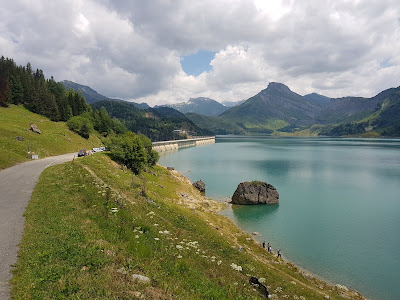 Then began the Cat.2 climb up to the Cornet de Roselend.  The road passed through an impressive rocky gorge, which was impressive for the sound of rushing water all around, but no visible sign of the source.
There were quite a few folk out on electric mountain bikes.  I kept passing a woman while she was taking photos, only for her to hoon past me 30 seconds later.

There were a few campervans just below the summit, including a few who obviously put some effort into brightening their campsites up!

Bruce arrived at the summit not long after I had - it was always nice seeing him on the road behind me, often stopped taking a photo of some dramatic vista or other.  The partner of the e-bike woman kindly took a few shots of us at the most impressive Col marker we've seen so far. 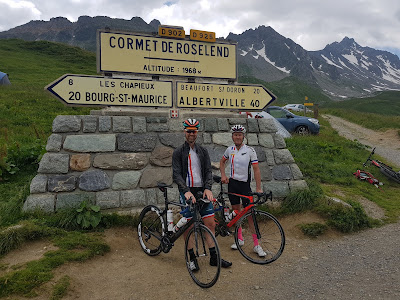 Then followed a 20km (!!!!) descent.  It's much more difficult to stop for photos when you're averaging 50km/h or more (and are reluctant to ride back up the hill).  When I saw a fully loaded tandem, I decided to take a shot on the fly, and then had to concentrate on the corner which was rapidly approaching.   In hindsight, I should've put the phone in my mouth, but no harm, no foul.

Bourg-Saint-Maurice, tomorrow's start town, was at the bottom, and we were due a coffee!  The signage boys were having a picnic overlooking the lake, and hadn't yet caught up to us, so there were fellas in white jerseys riding this way and that, but we all seemed to converge on the same coffee shop at the same moment.  Within about 15 minutes, everyone was there, including Jonathan with the credit card!  I ordered a double shot latte and an espresso - in hindsight, I could've just asked for a triple-shot latte and saved them a little bit of dish-washing.

I was one of the first to set off, but unfortunately my front Schwalbe Pro One had sprung a leak, and after filling it with enough air to get me up the road to where Roger was parked, I swapped it out for my very aero, but heavier, HED wheel.  (The two Pro Ones are now in the rubbish bin, and I will never buy them again...)

My legs took ages to warm up, but luckily the climb was yet another 1000m ascent, so they had plenty of time to.  Once they had, I was delighted to note that taking it easy had them in much better shape, and it was probably my strongest climb of the day.  (WHO'D HAVE THOUGHT?!)

The climb finished at the ski station of La Rosiere.  The road continued on for another 10km to the Col du Petit Saint Bernard, and the Col de l'Iseran (one of the highest sealed passes in Europe) was another alternative in the vicinity.  So, the organisers had gone easy on us!  Nonetheless, we finished climbing with just shy of 4000 vertical metres on the clock.

After a few photos... 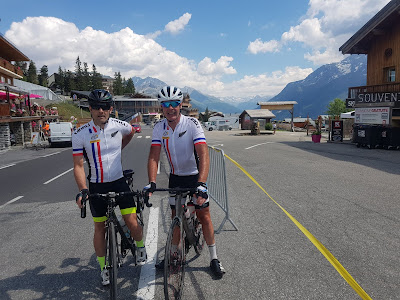 ... I headed down the main route with Stu.  It was great to see Aaron before we'd gone very far (the big man has had another very strong day), but Paul's ashen face was a bit of a worry.  He's getting a lot of sleep this evening, and we're trying to shovel as much food into him as possible.  Let's hope normal service resumes for him promptly.

The day's ride covered about 130km by virtue of the descent, and we were on the road for about 8 hours.  We'll be looking at about 10 tomorrow, I think, but I'm confident my pacing today will stand me in good stead.  And if it doesn't, there's views abound to keep me occupied while I'm chewing my stem.
Posted by sifter at 7:49 AM