After three massive alpine stages, Stage 13 seemed to offer a rare opportunity to recover a bit - funny how your perspective changes so that what would be a big ride in its own right can be trivialised. 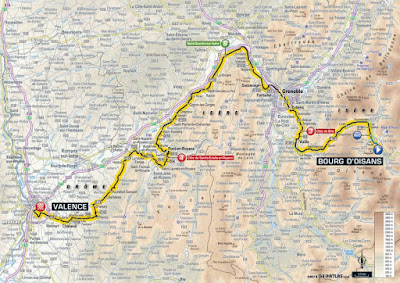 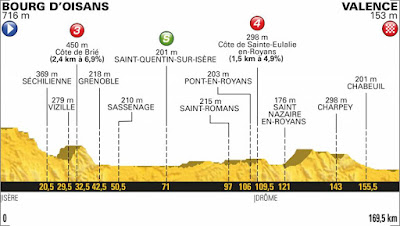 The day started with a long back-track in the vans.  As we got closer, we could see more and more people parking up in preparation for a day on Alpe d'Huez.  Once we were on the bikes, and riding back towards Grenoble, we got some hilarious looks from people, who clearly wondered why we were riding in the wrong direction! 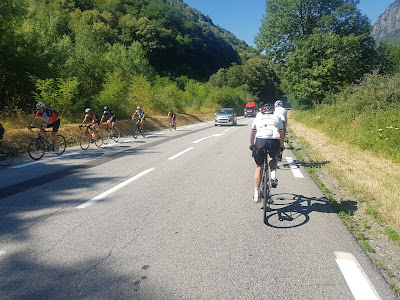 After a long time on the main road, we took a bit of a detour to approach Grenoble, and then did a stop-start lap of the city.  While the road was dead flat, the dozen or so red lights, took some toll on the legs.  It was also bloody hot, and the wide shade-less boulevards were making things worse, not better. 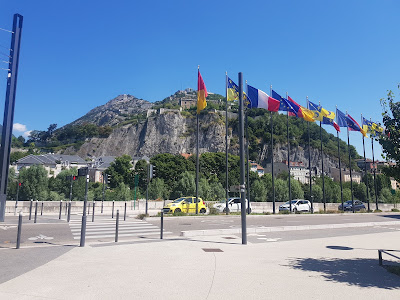 We stopped at a shady layby about 50km into the ride, most of which Super-Mike had spent on the front.  Apparently, our crew had been in a wee altercation with a lady of the, er, day, who couldn't "work" in "her spot" while we were there!!!

While we were making good time, there was a hot headwind to contend with, and the second half of the day was in the mid-30s.  We passed a walnut grove on the main road which had sprinklers going, and for 15 minutes or so, I regretted not stopping for a drenching.  When we finally passed another set, I took a detour into the trees, and it was glorious.

We eventually turned off the main road, and passed through a lovely wee village.  When I saw the swimming hole below, for the first time in the trip, I wanted to stop riding my bike...! 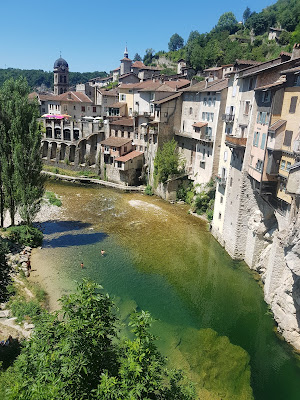 The tour-related roadside decorations had been few and far between, but one notable exception was the biggest bicycle I'd ever seen!  Apparently the wheels turned, too! 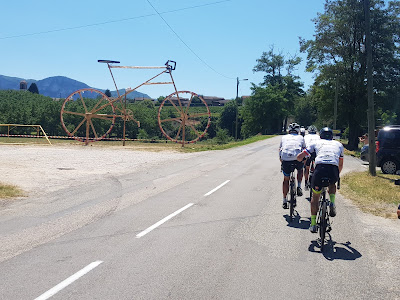 Our crew were waiting at the top of the short hill with our second food stop.  The local trough indicated the water was not drinkable, and that seemed like a good invitation to cool down.  Stu jumped in, and I was half expecting Matty to order us all to join him!  I made do with soaking my jersey in it, and when we set off, my GPS was reading 44-degrees!  Luckily, it wasn't quite so hot on the move, and the wet clothing really helped keep things bearable. 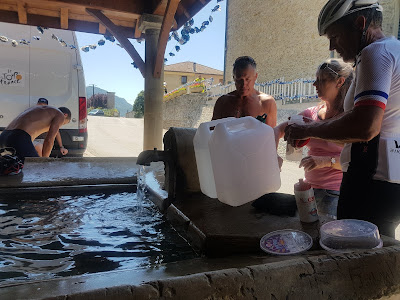 We passed through another stunning village, complete with viaduct... 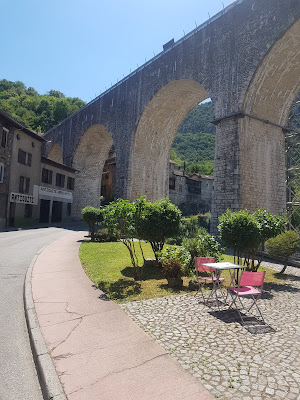 ... and its very own paddle-steamer in the river below!  It was quite the exquisite spot, but one which again, we only enjoyed for a moment. 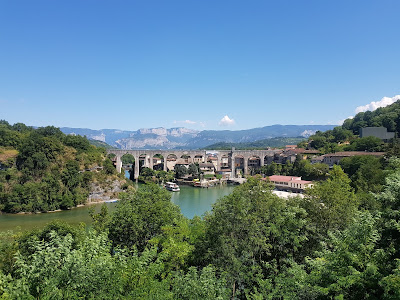 Soon after that, we caught the women, and were contemplating riding the final 50km with them.  But, they were going a lot slower than we wanted, and when they all pulled into a side road for a nature break, we left them to it. 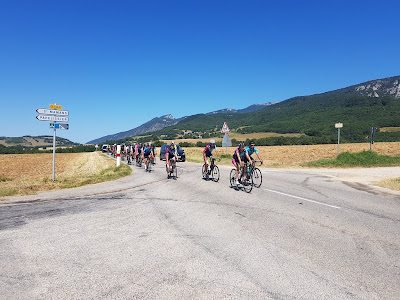 When we arrived in Valence, I drifted off the back of the group for a wee while - my legs were still pretty tired from all the pushing the day before, and I'd lost the will to push them.  The route was complicated slightly by a one-way street which we couldn't ride, but we got to the finish in good time, and I got a lovely surprise to see my parents there!  They'd spent 75 minutes on the TGV from Montpellier, and while we got to spend only 15 minutes together, it was so touching.  I only wish I'd been less pooped, and made better use of the short time with them.

I'm feeling worn down, but I guess that's to be expected.  The hotel we stayed in had a pool, and it was a real treat to go for a swim.  Having jumped in, I felt like I'd dived and gone to heaven...

This blog describes a fundraising project for the Mental Health Foundation of New Zealand.
To make a donation, visit https://events.mentalhealth.org.nz/fundraisers/sifter.  Any contribution, big or small is greatly appreciated, and will be put to good use by the fine folk at MHF.
Posted by sifter at 5:18 PM