After two Pyreneen stages with plenty of climbing, the organisers decided to give the few sprinters remaining in the race a chance to shine.  For us, it looked like a good stage to recover on. 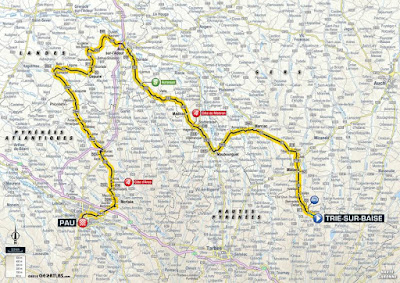 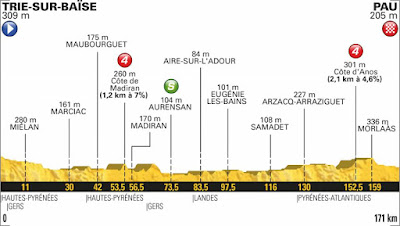 After a short drive from Tarbes, we parked up by a pretty cool roof, and got ourselves sorted. 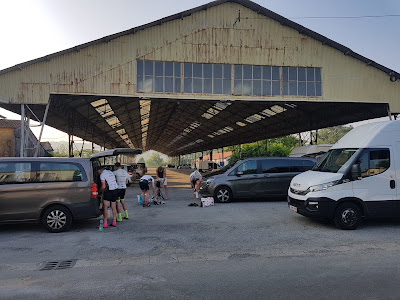 A minute or so into the ride, we passed the French women getting organised in the town square - the only time we'd see them today.

The first few kilometres were neutralised, as indicated by the cross hatching on the directional arrows (my hat's off to Mike, for noticing this subtle difference very early on in the piece). 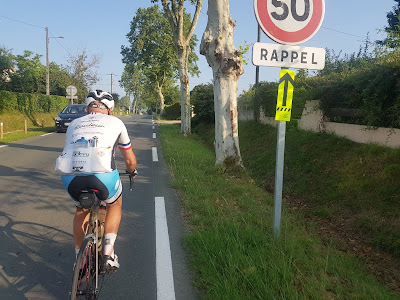 The depart reel is indicated by two vertical arrows... 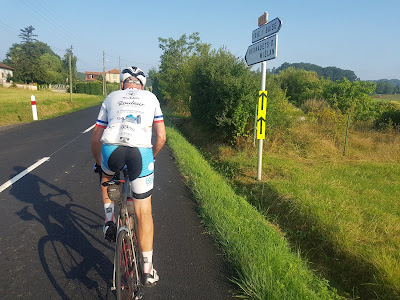 ... and finally, we could start counting down the kilometres.

The stage had few highlights - not many towns to speak of, though one did have a stunning wee lake, apparently with otters in it - but even so, there were a few "camping cars" sprinkled around the place.  It's quite remarkable where people park up one day early! 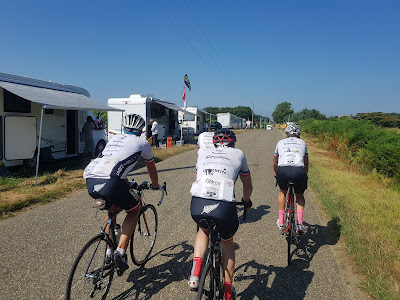 I spent a lot of time on the front today, partly because I'm feeling strong, partly because I just wanted to get the stage over and done with, and also because it is one of the few places in the bunch that I can truly relax.

For about half an hour before the second food stop at the 115km mark, I became increasingly uncomfortable, but luckily a bit of stretching in the back of Roger's van sorted things out nicely, and I was able to complete the final 60km without further problems.

We finished in Pau at around 3pm - one of our earliest finishes yet.   There's a grandstand waiting for tomorrow's finish, but few other obvious hints that something big is about to go down.

As it turned out, the short stage we'd completed yesterday hadn't started until 3:15.  We were far too early for dinner, so went in search of a place to watch it on TV.  By chance, we ended up at the hotel where Team Sky, Astana, and BMC look about to stay at.  Sky had no fewer than four large vehicles parked up already (despite the team being less than an hour deep into the stage)!!!

We retired to the bar, and ordered a drink each - hopefully enough to buy us sufficient time to watch the TV for a while.  We'd missed them on the Peyresourde, but were able to watch most of the second climb.

I'd predicted a sub-2h45 finishing time, but it was astonishing to see Nairo Quintana knock off the stage in 2h21 and change, with the maillot jaune not far behind.

Our extra-curricular activities have been few, but diverse, and this afternoon's viewing really did add to what was an otherwise pretty dull day.

After our final dinner at Flunch (where the food is relatively tasty, but the calories ingested per hour is an order of magnitude greater than the more upmarket places), we drove to Lourdes.  I have a lovely view of the Gave du Pau, and unlike last time I was here, it is flowing under the bridges, not over them!! 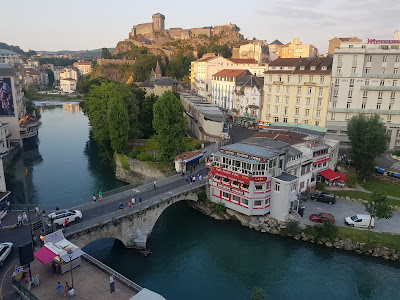 This blog describes a fundraising project for the Mental Health Foundation of New Zealand.
To make a donation, visit https://events.mentalhealth.org.nz/fundraisers/sifter.  Any contribution, big or small is greatly appreciated, and will be put to good use by the fine folk at MHF.
Posted by sifter at 6:59 AM