Since the Tour route was announced, I've always thought the stages through to the first rest day are perfect for us (well, apart from the cursed cobbles in Stage 9).  The placement of a relatively short (35km) team time trial as the third stage struck me as a perfect way to settle in. 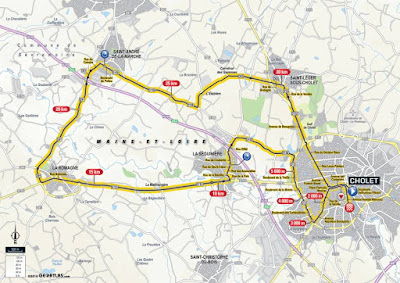 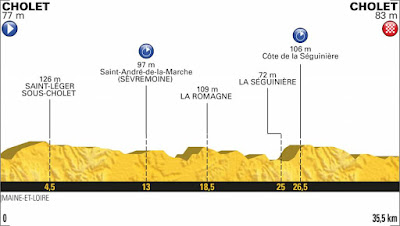 Despite the short ride, we stuck to our established schedule of an early breakfast, and we were on the road just after 8am.  The tube in my rear wheel had failed at the valve, necessitating a replacement which in turn needed replacing when it too had the same problem.

We had a long drive to Cholet, but it passed quickly, and let our bodies focus on processing breakfast.  Due to the short and simple stage, Cam and Jonathan were riding with us, and someone had managed to convince Roger to suit up too!

We had a short ride to the start area, and were glad to see the direction markers had already been put out.  A few pedal strokes in, I knew it was going to be one of those glorious days on the bike where nothing would seem an effort.

The roads were super smooth, and while the course was rolling, it was clear the pros will be absolutely flying, with only a couple of corners being really tight.

Some in our group were keen to take full advantage of the short stage, and to really cruise.  At one point I drifted back to two that had been dislodged, and then opened the taps bridging back across to the bunch.  Probably silly, but it felt wonderful.

We regrouped, and not long after a woman rode past on a nifty-fifty.  I was alongside Roger, who looked at me and gestured after the scooter.  I gave him a big smile, and then hung grimly onto his wheel as he chased her down.

He'd clearly had fun, and so had I, and we enjoyed smacking it for the last few kilometres back into Cholet.  We chatted a little, and Roger confirmed he'd finished both the "Tour of Flandria" and Paris-Roubaix, as well as the two Dauphine-Libere races that I knew about.  He'd mentioned last night that he'd also been Belgian amateur champ back in the day too, winning solo...!  It was wonderful watching this amazing 65-year-old mashing those pedals - what a sight to behold, and something to aspire to. 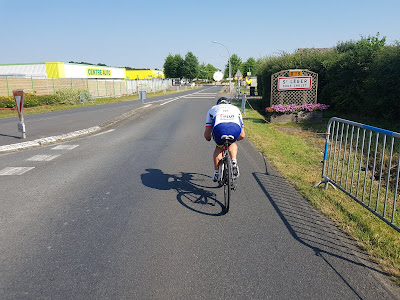 The finish line was a bit of a let down again - not yet marked out, and also preceded by about 5 sets of red lights.  But, it was nonetheless cool to see plenty of evidence the Tour is coming to town. 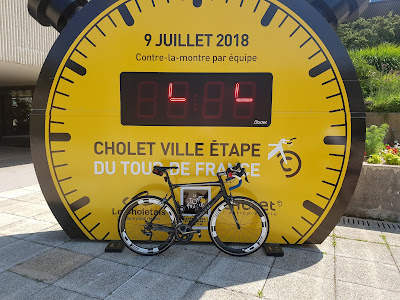 We had a quick lunch back at the vans, and then learned Stu had pointed out to Jonathan that Cholet is not only within about 15km of the Stage 2 route, but also that we were a few hours ahead of the time the peloton were predicted to pass.

A very short drive later, we found ourselves at none other than the place we'd all decided to stop for photos yesterday morning - Tiffauges. 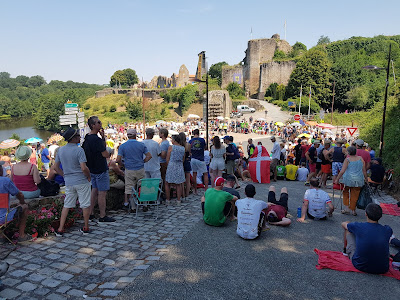 While the riders were a good couple of hours away, the caravan arrived within half an hour.  I found a spot on the footpath, and had various bits and pieces flung in my direction (and many more things not).  It was quite something to witness, and nice, because it never seems to be shown on TV coverage of the race. 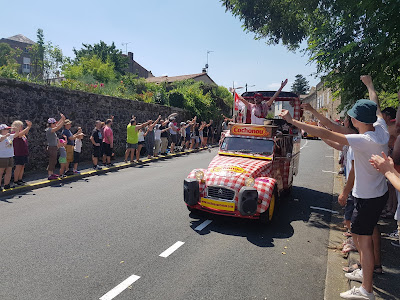 After the publicity caravan had been through - probably about 15 minutes worth all up - Stu, Mike and I strolled up to the top of the village.  While we gave up before the road tipped down (and the riders would be coming up, and therefore passing more slowly), we did score a spot in the shade from which we could watch the race on a big TV screen.  It was cool to see Dion Smith, a fellow New Zealander riding his maiden tour, claim the KOM points from a break of 2 others, giving him the honour of wearing the polka dot jersey tomorrow.

When the riders were within 15km, we headed a bit further up the course, forgoing the shade for a better vantage.  Silvain Chavanel flew past alone... 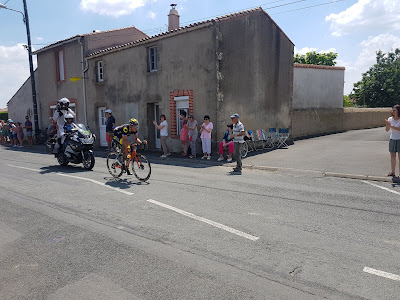 ... and then a few minutes later, the peloton.  I videoed it, and while the riders all pass within about a 15 second period, the race convoy lasts another 2 minutes 20.

Unfortunately my brain couldn't process so much data at once, so it was all very much a blur in real time, but a magical thing to have seen.  I feel very grateful to Stu for coming up with the brilliant idea to go there - the next chance we'll have will be the second rest day in Carcassonne.

What a day of highlights, from a short 2-up TT with our ex-pro, Roger, who rode some of the biggest races in the world in the early 70s with the likes of Merckx, through to seeing the best riders of today passing metres away.

This blog describes a fundraising project for the Mental Health Foundation of New Zealand.
To make a donation, visit https://events.mentalhealth.org.nz/fundraisers/sifter.  Any contribution, big or small is greatly appreciated, and will be put to good use by the fine folk at MHF.
Posted by sifter at 4:11 AM