The Stage 5 parcours was obviously a step up from the earlier routes.  Long, and not at all flat.  We were staying a short 20 minute drive away from the start in Lorient, and we were riding by just after 0830.  The weather forecast was more benign than the route, thank goodness. 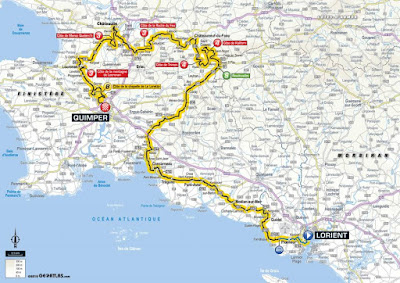 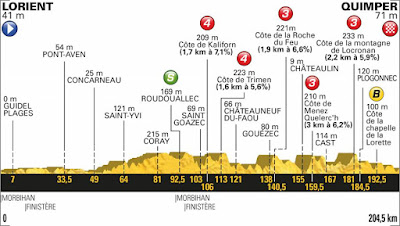 I was actually feeling a lot more calm today, after a pretty wild mood swing yesterday - pretty ecstatic in the morning, and a tad agitated by the end of the day.  The early kilometres were great, with lovely smooth turns at the front, and beautiful scenery.

Stu punctured just after we hit the coast for the final time.  Little did we know that our lunch spot was about 30 seconds ride away, just around the corner.  While we were eating, the Donnons des elles au velo rode by with a massive group in tow, and there were lots of friendly waves, which was nice. 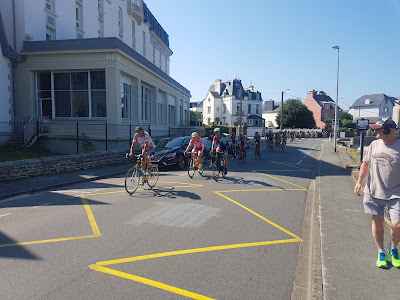 Things got hillier thereafter - we had a couple of Cat.4 climbs to deal with before our second feed stop, but we were going up and down constantly, and had it not been for the no-parking signs for a few hundred metres either side of the hilltop, it would have been impossible to pick them.

After lunch, we split into two groups, and I set off with Stu, Steven, Jason and Bruce.  Three Cat.3 climbs beckoned, and a handful of other climbs much tougher than the Cat.4s from previous stages.

Bruce sat up, and I ended up yoyo-ing off the back of the bunch of three.  I hadn't yet swapped my 11-32 cassette over onto my HED wheels, so was grovelling up the climbs in an 11-25.   Not enough, given my bulk, and the gradients.

Cam and Matt were waiting for us just before the base of the final Cat.3 climb.  I'd been having trouble with my right foot, all the climbing out of the saddle had been putting a lot of pressure on my outside toe, and it had become quite sore.  Curiously, when I gave myself a head-start on the others, being off the bike for a few minutes had miraculously cured it.

The boys caught me just as I was passing through Lochronan - there was a lovely cobbled section of road, but a missing arrow had me scratching my head for which road to take.  It turned out to be a tiny cobbled lane between yet another impressive church and an adjacent building. 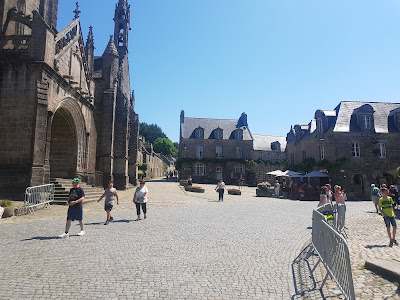 At the top the climb, I had to go pretty hard to catch up to the boys, and by the time we over-ran the course markers on the outskirts of Quimper, I sat up and cruised home to the finish.  Everything seemed to be running OK, but 215 increasingly difficult kilometres over just under 9 hours (3100 metres of climbing with an average moving speed of just under 27km/h) had taken their toll.

One of the signage guys told me tomorrow's stage is "moins dur", which was good to hear!  To boot, the cassette change has now been done.

Despite my Duolingo French lessons telling me otherwise, for me, Quimper will always rhyme with Whimper.

This blog describes a fundraising project for the Mental Health Foundation of New Zealand.
To make a donation, visit https://events.mentalhealth.org.nz/fundraisers/sifter.  Any contribution, big or small is greatly appreciated, and will be put to good use by the fine folk at MHF.
Posted by sifter at 8:05 AM