When Hayden asked us all at the first team training camp in Cambridge, "what are you most nervous about?", I answered "the cobbles in Stage 9".  And here they finally are, 21km worth, sprinkled amongst a 160km parcours. 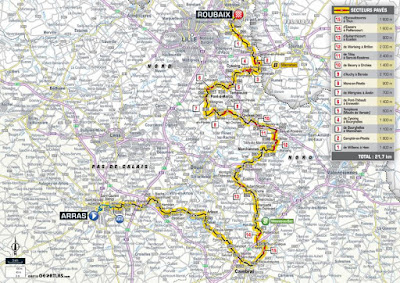 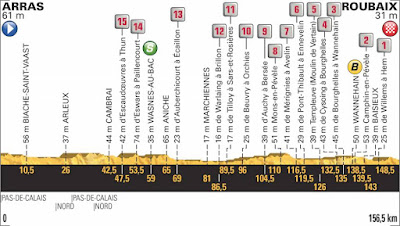 Once we'd finished breakfast, we had a fairly short drive to Arras.  Once there, I swapped out my HED wheels for a pair set-up tubeless.  I was a little worried about them, having noticed that while incredibly fast on the road, the Schwalbe Pro One tyres cut up incredibly fast too...  For the time being, the sealant was doing its thing, but at our first nature break on the outskirts of Arras, I spent the time putting a bit more air in the rear tyre.

As per usual, the women had got away earlier than us, and we passed them about 45km into the stage.  Soon after, we hit the first of fifteen cobbled sectors.  Roger had recommended we ride on the crown, and to keep our speed up.  Initially, these were both fine, but when the road tipped up slightly, it became somewhat of a challenge keeping on top of the gear.  Once off the cobbles, my quads squealed the first time I tried to stand up off the saddle.

Our first food break was before the second sector, and that was an opportunity to put a bit more air in my tyre.  It survived the second cobble sector, but on the third, ironically numbered "13" (traditionally the sectors are counted down to one), I could feel my rim occasionally hitting the cobbles.  The roadside was sandy, so I was able to ride to the end, where fortunately Matt and Bill were filming, and I was able to swap the wheel out again.

The boys were waiting in the shade a kilometre or so later, and we rode together for a bit, but I kept being distanced in the cobbles.  Some in our group seemed to genuinely be looking forward to them, and while I wasn't particularly dreading them, I certainly wasn't enjoying them.  As my level of commitment waned, so did my speed, and that made things worse rather than better.

I briefly stopped when I saw Bruce replacing a tube, and I rode with him through to the second feed stop, by which stage we'd over-run the three marking vans.

When we set off, we were still ahead of them, and only Stu and I had the map loaded on our GPS units.  I wasn't far off Stu, Steven, Bruce and Mike, but Aaron and Paul were behind me, so I slowed to ride with them, lest they be stuck without a navigator.


While the three of us were riding together, we started noticing old Paris-Roubaix direction markings painted on the road.  When Jonathan had stuck to the road, they proved a useful clue that Aaron had picked up on.  We were saved extra distance by Stu's group backtracking after seeing the end of sector 3 sign, and by the time we made the correct turn, they'd shot past it and were too far away for us to holler at them. 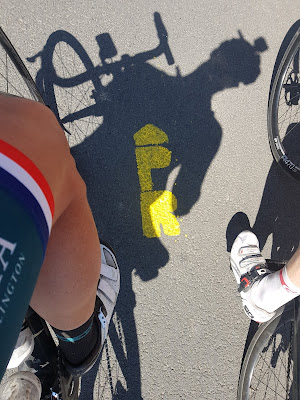 It had been good to set off with the others, with one benefit that I hit the cobbles a little bit harder, and that helped snap me out of my reluctance.  It was still incredibly rough at pace, and flicking from the crown to the gutter or vice versa, seemed like rolling the dice, but, aside from what sounds like a cable outer bouncing around in my frame, the bike seemed to be handling it all with aplomb.

At the last sector, we stopped for a few photos, before knocking it off together.


It was nice to get off the cobbles, and we had a relatively straight forward run into Roubaix.  Since Stage 1, there's been no sign of a finish line, but we found Roger parked up on a side road, between the old and new Roubaix velodromes.   The gate was open, so the three of us did a couple of laps before Roger put our bikes in the van. 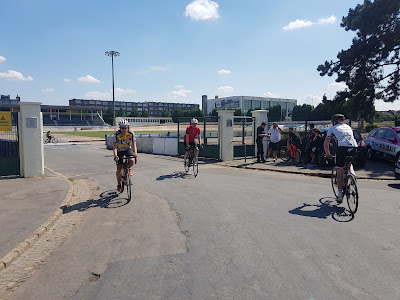 The others turned up soon after, and while they were doing their spin round the velodrome, I heard a New Zealand accent, and ended up having a nice chat with Brian, who's doing an epic cycle tour through Europe, with the current focus being on a bit of spectating.

We all got changed, had a bite to eat, and then were treated to a visit to one of cycling's hallowed halls - the Roubaix showers, featuring plaques of all the winners of Paris-Roubaix (and the lanterne rouge from 1968, curiously). 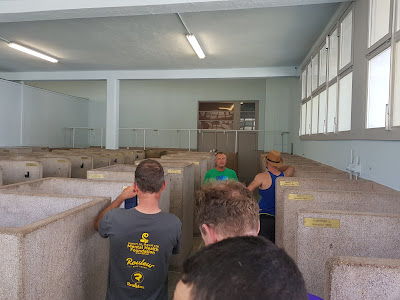 It truly was an amazing experience, even through the haze of an hour post-stage (at the end of nine days of riding in which we've covered a whopping 1645km)!  I thought a lot about my dear friend Oli, as I wandered around, knowing how much more he would have appreciated this incredible place.

After about 15 minutes wandering around the stalls, we retired to the clubrooms and had a cold drink, while admiring the Paris-Roubaix memorabilia around the place.


Dinner beckoned, and we piled into the van, and treated ourselves to a completely non-French dinner in honour of Bastille Day (at Buffalo Grill, yee-haw...).

Of the three blocks in this year's tour, I genuinely believe we've done the hardest one.  The first rest day is tomorrow, which we'll be spending on trains through to Geneva.  Then, we're into the Alps - while 2-hour-plus climbs are tough physically, I am certain the beauty of them will make the days fly by.

Today, I covered 167km, in 6h45 elapsed, and it was a relief to complete this gnarly stage with all my blood on the inside, not to mention my bike and wheels in one piece (I think - I'll be inspecting my bike in a day or so, and writing Graeme Pearson one hell of a reference if the stay he repaired a couple of years ago looks just like a bought one!

I've long held high respect and admiration for the world's top cyclists.  Having experienced those cobbles today, the levels just got bumped up a whole lot!

This blog describes a fundraising project for the Mental Health Foundation of New Zealand.
To make a donation, visit https://events.mentalhealth.org.nz/fundraisers/sifter.  Any contribution, big or small is greatly appreciated, and will be put to good use by the fine folk at MHF.
Posted by sifter at 7:37 AM