After months of planning, it is good to be finally underway.  Especially after a few last-minute hiccups - I'm not sure how I screwed up my arrival date when putting together my route schedule, but screw it up I did.

It was a bit frightening when the bike didn't appear at Charles de Gaulle airport - my lack of French wasn't a huge barrier in the end, but it would have been useful to be able to converse fluently with the airline staff.

I'd originally planned to hit the road immediately, but the bike's missed connection at Heathrow cost me 48 hours - by the time I'd got it, the travel agent at which I was going to leave my bike bag was closed (Saturday afternoon, and not open on Sunday).  There was nothing to be done though, except face facts and enjoy exploring Paris a wee bit.  I got accommodation just around the corner from the travel agent, so will be able to make an easy start when they open on Monday morning.


My first port of call was l'Hotel Réveil Matin on the outskirts of Paris.  Garish, as promised, but significant - it was the starting place of the very first stage, of the very first Tour de France.   Given my goal to ride an old tour stage every day of this Cycle-Tour de France, it seemed like the perfect launch pad.  It was a bit of a mission to get to - the route I had mapped had me going the wrong way down a one-way street, but I got there in the end!


Not long after the hotel, I got my first puncture of the trip - not a great omen so early on!  It could be a long, slow lap of France at that rate [in fact, it was the first of only two punctures in 4800km].

Picked up a great cycle path... 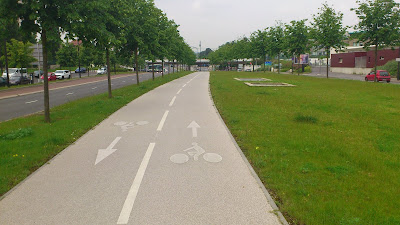 ... which became not so great after a while, and had me wishing for my mountain-bike!! 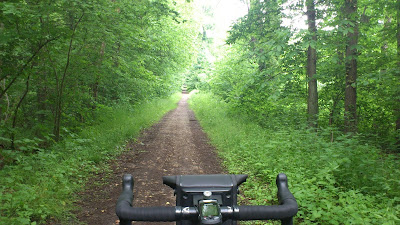 Arriving into Versailles was cool, and after soaking in the extravagance of it all, found a wee cafe and bought some pasta salad.  The owner of the cafe seemed very interested in my bike, but he didn't approach me.

It was very nice to get out of city.  I felt elated at times, free just to pedal and roll and swoop. 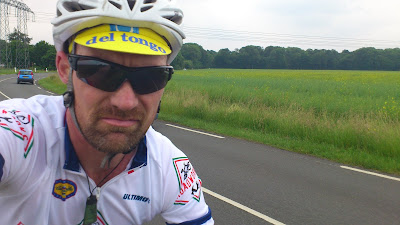 I'd read that the cathedral at Chartres was visible from miles away, and indeed it was.  As I got closer to it, it became harder and harder to photograph.

After Chartres, I picked up my first old Tour stage, sort of.  In 2012, stage 19 was an individual time trial from Bonneval to Chartres, and I was going to ride the route in reverse.  Everything started to feel very real when I found first remnants on the road, exhorting Bradley Wiggins to victory (in the stage, and the tour).

I'm going to have to put up with the odd deviation, it seems - and added "route barrée" to my limited French vocabulary.  The meaning of this one was pretty obvious, though I'm sure not all important messages will be.

The language barrier is quite intimidating, but I seem to be getting by OK, and most people answer in English.  Managing to eat and drink well enough though:  Pringles and coke at Rambouillet, the pasta meal in Versailles, McDonalds for coffee in Chartres, and pain au chocolat just out of Bonneval.  I don't like leaving my bike outside - all my worldly possessions for the next month are highly mobile, and it would be horrible to lose them.

I was shocked to find Bonneval was tiny - I'd assumed that any stage-town would be huge, with hotel rooms abundant.  But, not in this case!  Luckily, my fitness is good, and having ascertained my bed was up the road somewhere, it was a simple matter of pedalling on.

I got close to Châteaudun, about 15km from Bonneval, before stumbling on my first Ibis Budget of many.  The evening routine is going to be relatively simple - charge GPS, show signs of life on Facebook so that when those in NZ wake up they know I'm OK, jump into shower in bib shorts and then get myself clean too.  Tightly rolling the shorts up in the towel drags an amazing amount of water out of them, and with luck, they'll be dry in the morning.

There was a restaurant a few minutes walk away - if tonight's potato and salmon was anything to go by, I'm going to eat well on this trip!  Neither the beer I had with them, nor the McDonalds sundae I had for dessert, were things I'd have at home, but what the hell. 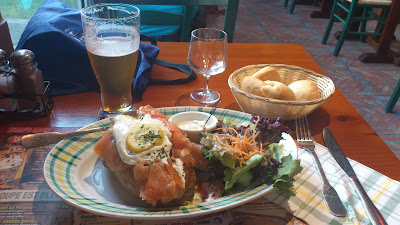 I'm feeling supremely confident in my legs, but nervous about the eating and sleeping arrangements.  Feeling fine being away from home - though talking regularly to Kaitlyn and email with Mum and Dad, and chatting with Sarah helps.  I like how the French say WiFi - not "why fye" but "wee fee".  I also like that they have it at all - McDs seem to consistently, and the hotel too.

I'm feeling down, but calm on the bike.  That’s why I’m here I guess.

All in all, a good first day.  177km covered in just over 8 hours (Part 1 and Part 2), but plenty of stopping for food and photos.  Tomorrow, I'm gunning for Poitiers - it's 295km away, but a relatively flat route - hopefully an opportunity to make up some of the lost time.