After the previous day's baking sunshine, it was still a disappointment to wake to drizzle.  The kids didn't have school today, so we all had a slower start than yesterday’s 7am.  Silas made coffee and porridge again, and then omelettes!

After saying goodbye to Ange and kids, Silas and I rode out together, after a quick stop at a boulangerie for some supplies, we rode back towards Faverges (at the base of Col de Tamie that Silas and I had ridden together after the Madeleine), mostly on amazing cycle path.  A friend of Silas passed us and we sped up to ride with him for a bit.

Once he turned off to do the Col de la Forclaz, we continue to the Col de l'Epine - I'd be completing the 2013 Stage 19 route that I'd started a couple of days earlier from Le Bourg d'Oisans.   We ignored the “Route Fermee” sign, and later chatted to guys doing tree work as we pass.  There was no closure sign at the top, and besides, the workers hadn't seemed bothered.  I didn't much enjoy the wet descent.  That was followed by a small climb and we stopped at the sign there for photo - it was a bit of a novelty being in the shot with my bike!


The next descent took us almost as far as Thones, just up the road from my old friend, Dingy-St-Clair.  At the base of the Col de la Croix Fry, I farewelled Silas, and continued on my own.  Slowly!! 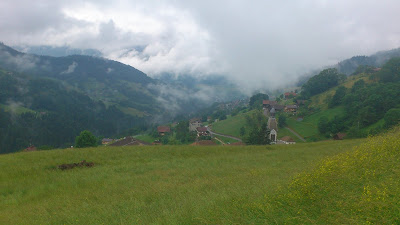 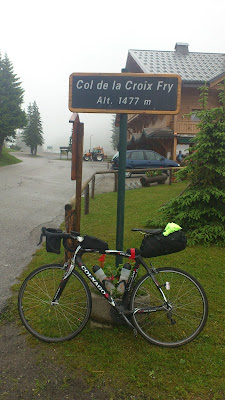 The Cat.1 climb took me just over an hour, and was followed by a cold descent into La Clusaz.  I made a stop there, and bought a hot dog (of all things!!), two hot chocolates and some sweets.  Variation often comes at a cost, and this was in the form of some crazy hot mustard which made the American-style vittles unenjoyable to eat.


The descent continued through to Le Grand Bornand, which was where the upcoming stage would end.  I was wet, and getting cold, so stopped in town to put my undershirt on.  Unfortunately, that involved getting half naked on the main drag, but it was worth it for the additional comfort.

The Col de la Colombiere was another hour-long climb, and after a brief photo stop at the top, got stuck into a beautiful, but nervewracking descent. 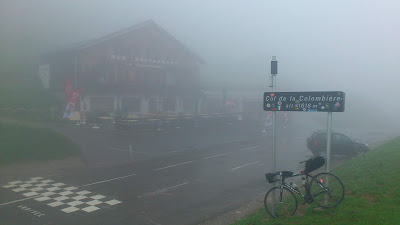 For the most part it was wet, and the road looked slippery, whether it actually was, or not! 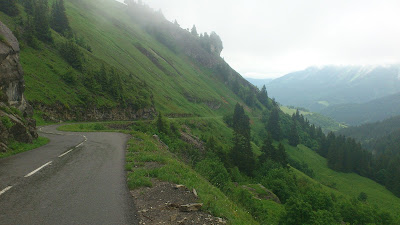 Near the bottom, I met two German cycle tourists and had a half-decent conversation in German -  probably my first legitimate one since my sixth form days (Year 12 in the new-money)!


At the bottom, I was frustrated to realise the route I'd mapped took me straight onto another climb.  The climb was nice enough, but it was annoying to get regular views of the parallel route down in valley. 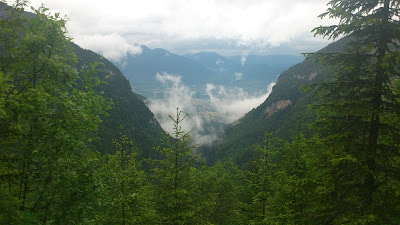 On the other hand, the views near the top were fantastic.

There was a loud concert on in Cluses, and the sound reverberating off the steep valley walls was a highlight of the descent.

I stopped at a supermarket for cheap pain au chocolat, pain au raisin, and 1.5L of OJ.  I've discovered that the Lidl supermarket chain is very cheap, but always has very long queues (go figure!)!  Nervous about my worldly possessions "locked" outside, I leave half the time without buying anything.

There's a short climb out of Cluses to cross into the next valley.  I jump on a closed road – on account of about 50m of resealing – and enjoy 6 luxury-kilometres on my own.  After crossing the river, the road takes me as far as Samoens, and I take the first sign-posted route onto the Col de Joux Plane.

It was raining on and off on the way up, and I just rode quietly.  My legs were feeling pretty thrashed, and I was in no mood to add insult to injury. 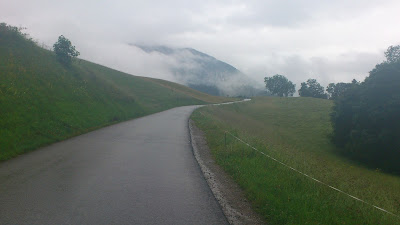 The rain got torrential at the top but adding my hood under my helmet made a good difference. 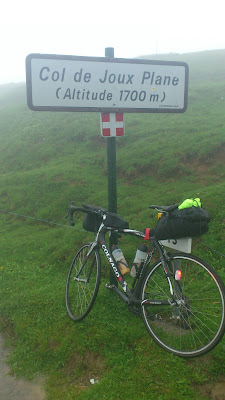 The descent into Morzine was tight and twisty, and didn't burn off all of the 1000m elevation gained on the climb.  While low speeds prevented me from getting too cold, I definitely burned through a decent amount of brake pad!

It took a few minutes to find my hotel, but despite arriving wet and bedraggled, I received a warm welcome and was soon enjoying hot, long shower.  By the time I'd finished hanging my wet clothes all over room, there was hardly room to move!

I'd hoped to meet Wellingtonians Steve and Nessa for dinner, but learnt that Steve had come off his mountain bike, necessitating stitches and preventing socialising!

I couldn't bring myself to put my wet shoes on, and walked across the road in bare feet.  I passed a  very full restaurant, before going back to it - figuring it must be good.  I ordered a half-litre pitcher of wine – far too much as it turned out, a glass would have been more than enough.

On the other hand, I did score the best carbonara I'd ever had – an egg yolk came in a side dish, and I was to mix it in myself.  The pizza which followed was a little too much, and my leftovers were put into a doggie bag for me, and made a very good snack the next day.  Foolishly, I ordered chocolate mousse, and felt very sick on the way back to the hotel.

The next morning's ride was a transfer through to Bellegarde-sur-Valserine.  I'd originally intended to stay in Le Grand Bornand, but the invitation to stay with the Cullens was too good to miss.  The day started on a great note, with a lovely social occasion - coffee with Steve, Nessa, and Mike the Hippy. 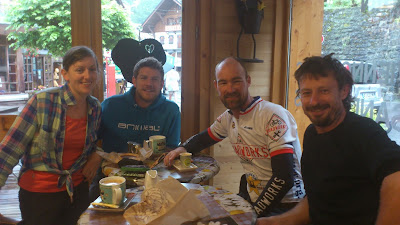