Very early on in my project, one of the few stages I definitely wanted to replicate was Stage 12 from the 2000 edition, where Armstrong was pipped at the post by Marco Pantani, at the summit of Mont Ventoux.  I'd been unable to find a route map, but a stage profile had given a distance of 22km to the first sprint point, so I'd mapped a route that almost certainly was wrong, but made up the distance nicely.


I woke before my alarm, and soon after 7am, headed down to breakfast.  It wasn't a buffet, but the man brought me some extra bread.  After a skype session with mum and then Kaitlyn, I packed up and got ready to go.

It was a warm morning, and before leaving town, I stopped at a supermarket for petit pain, bananas and apricots.  And nail clippers!

After the warm up kilometres, it was onto a very mellow Col de Murs.  I really enjoyed the climb and the morning generally, and it felt like a good day in the making. 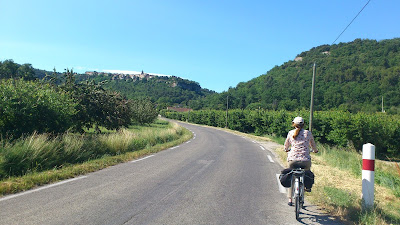 After a cool descent, I foolishly burnt a match passing a tractor, only to find myself at the base of another hill, up which the tractor was faster. Doh!  There was a headwind into St Saturnin, so to celebrate my arrival there, I stopped for a coffee and juice. 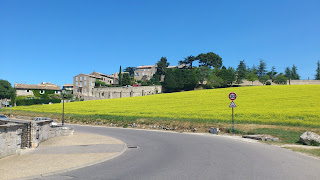 After a long south-eastward run, it was time to head north again.  It was quite a way to Sault, and hilly, but the elevation came with good views. 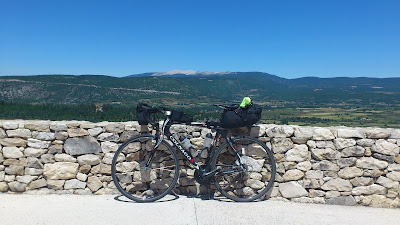 
Ignoring one of the routes up Ventous, I then rode west across to Mormoiron.  This consisted of a long climb, followed by a big fast descent, which I found quite nervewracking – it just doesn’t seem possible to descend for so long!

There was a random hill at Mormoiron, which seemed quite unnecessary, and I stopped at supermarket in Bedoin for a can of coke and a litre of OJ.


I got passed by another cyclist the instant I set off, and it took me a few kilometres to overtake him.  I passed nine others before the Tom Simpson memorial, which is where I had my first stop. 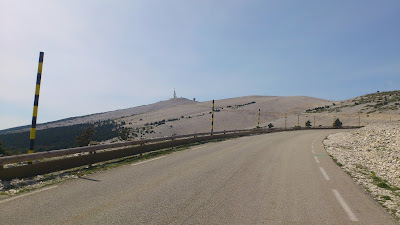 While I was there, looking at the tributes, the first guy passed me again, but he didn't seem to like the wind and gradient of the last kilometre.   I swung in front of him into the wind, and motioned for him to jump on my wheel, eliciting a “Merci”.  When I reached the top a few minutes later, I was alone!

I put some warm gear on after photos and enjoy long descent to Malaucene.  I was pleased not to get  too cold, unlike the Pyreneen descents. 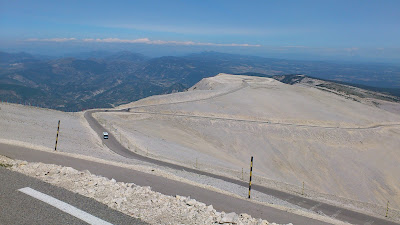 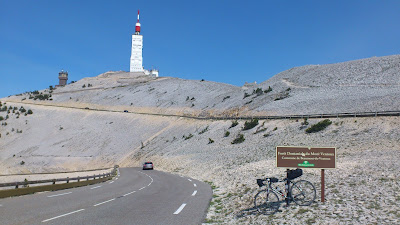 At Malaucene, I stopped for a café au lait, and a quick bike shop sift.  After stripping off my warm layers, I had a short ride to Vaison-la-Romaine.  It was fairly quick, even though I took a "bike friendly route" and got a little lost! 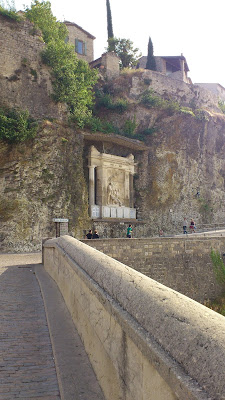 My hotel a nervous few kilometres out of town, but it was exactly where google maps said it would be.  I had a warm welcome, a good shower, and finally trimmed my nails, which had been driving me crazy all day.  (Why are they perfectly fine one day, and then ridiculously long the next?!?!)

After all of that, I saddled up again in civvies for the ride back into town for dinner.  I settled on a Vietnamese/Chinese restaurant for something a bit different.  A beef noodle entrée, chicken curry and double rice main, deep fried apple and caramel sauce, plus a Singha beer later, I was ready to go home and put my feet up.

The old town looked lovely in the evening light, and the ride to the hotel passed quickly enough. 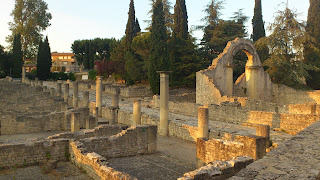 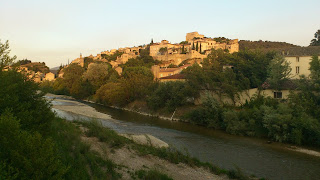