The day started well.  I woke, got organised and was ready for 8am breakfast by 7:45.  It really helps having clean riding gear to get straight into! Breakfast was ready too, and I was away by 8:30.  On the menu?  Stage 10 from the 2006 race.

I was immediately into rolling terrain, and enjoyed my first real climb, Col d’Osquich – kilometre markers indicating average gradient for the next kilometre.  It was a real buzz to see these, partly because they marked progress and foreshadowed what was around the corner, but mostly because they truly embrace cycling. 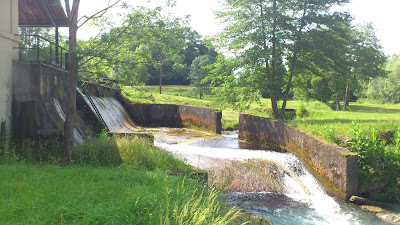 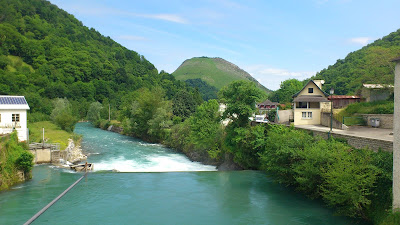 Stopped for some pastries and a woman chatted to me about riding or some such.  She spoke incredibly fast and obviously didn’t realise I only understood the reasonably frequent “velo”!  That in stark contrast to "Calamity Jane", who I doubt spoke French, and seemed an unlikely person for a store in the Pyrenees to be named after. 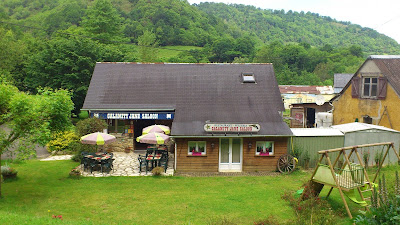 Turned off soon after to take Col de Soudet "short cut". The "official" start of the climb was about 9km into the climbbybike.com 30km segment. 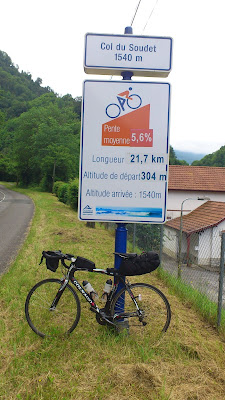 The stated average gradient was 5.5%, so it was a bit of a worry that the first many kilometres (each signposted with their own gradient) were at 3%.

There was some very cool irrigation and hydro infrastructure up this valley.

Hardly any traffic, but saw one cyclist coming down.  He was wearing Movistar kit, and looked pretty serious.  Alas, I didn’t notice the bike, so could have been a punter (like me)!


Once at the top, there was a turn-off to Spain.  I didn't feel like extra climbing, so stuck with France!


It was a strange scene at the top, with a family having a picnic, and kids were playing on an incredible climbing wall, complete with a decent chunk of the road cordoned off!


There was a MTBO or adventure race of some sort on, and saw quite a few participants early in the descent. 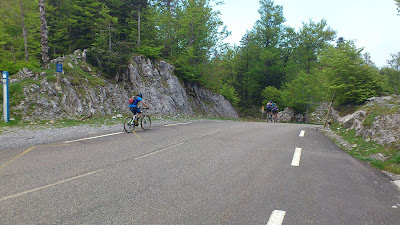 It got cold fast, and I stopped to put my vest on, then again to add my coat.  There was a very cold section in some cloud, but otherwise OK.  Some lovely fast stretches, smooth road, and mellow turns.

I had lunch in Arette.  Too late for “menu du jour”, which had been a great treat in previous days.

Arrived soon after at base of Col de Marie-Blanque.  There was a very cool little bridge arrangement at the bottom for a hook-turn.  Expensive road-safety feature!


Alas, the climb started slowly, and then kicked up.  There were a couple of kilometres over 10%, then a nasty 13% + 12% double act to finish.  Not fun.  It was stinking hot, and I stopped for some shade, and to muster my resources before tackling those last two kilometres.  They genuinely had me thinking about dropping into a shop for a triple crankset and front derailleur!

Had chatted to a French guy at Arette who described the descent as “sinuous”.  It wasn’t bad at all – if anything, simpler than the descent  off the Col de Soudet since my speed was not as high. 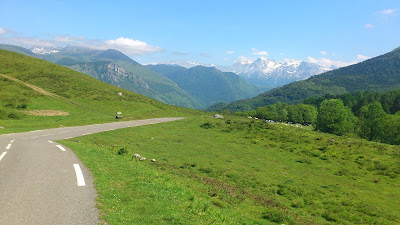 Aside from the mountain views, awesome scenes of cattle lying in the sun.

A sign at the bottom indicated Col d’Aubisque up a fantastic valley with looming mountains, so should ride towards them tomorrow.  Concerns about gearing aside, it's so good to be in this phase of the trip.

Stopped for a drink and “meel fy” (mille-feuille) before riding into Pau.

Was a bit more organised for directions, and still early (6pm) so had no trouble finding hotel.   They recommended a nearby Chinese restaurant for dinner.  I ate far too much!  Plenty of rice and meat, but not much vege.  Ate too much, then ate a bit more…

The restaurant was quiet when I arrived at 7:15, but HEAVING by 8pm.  (Like my guts.)  Obviously a local favourite.