The last couple of days have been arduous.  Following from the 295km ride from Bonneval to Poitiers, on the 12th I tackled an old tour stage between Poitiers and Bordeaux (stage 7, 1989).   Well, I tried to.  I couldn't find a route map, so built my own from a youtube video of the stage.  In the end, it was an at times frustrating 271km ridden, 13 hours elapsed.  I ended up paying way too much for a hotel at the wrong end of town.

The following day was a mostly wet 182km ridden, 9h40 elapsed replication of 2006, stage 9, between Bordeaux and Dax.  Had no accommodation problems there, courtesy of yet another Ibis Budget.

I've given myself a day off today, starting with the 7:45am alarm.  No need to rush at all.

I started with a big buffet breakfast, and then gave my bike a bit of a wipe down with a couple of serviettes, and re-lubed my chain.  It had coped well with the rain yesterday, though I had applied fresh oil a couple of times.

I gave Kaitlyn a quick call, and then headed off.

I rode softly out to Bayonne via a relatively hilly route.  It was very nice though, and I was much less conscious of the time and distance when riding “off map”.  Still, good progress, with occasional glimpses of hills to the south.

Bayonne was a very cool old fortified town, with a university now occupying the castle! 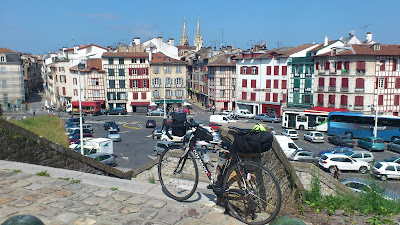 Eventually, I'd had my fill, and rode another few kilometres west, to find Biarritz, scene of David Millar's room-raid-downfall.  The ocean was revealed when I was only 100m away from it.

I spent ages cruising around, taking heaps of photographs, including one of two Thorn touring bikes with “New Zealand” stickers on them.  I left a card with “Sorry I missed you!  John @ 1000km – 3000km to go!” written on it.

It was really nice to have no time pressure, and while I had no interest in setting foot on the beach, it was nice to while away a few minutes admiring those who had. 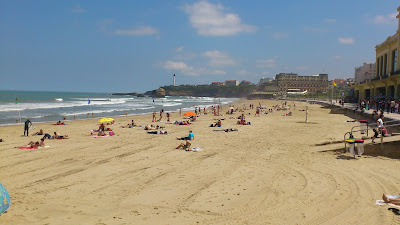 It was a good thing I did - a while later I saw those bikes again, this time with their owners, Nicki and Donovan.  We chatted for ages, during which time I learnt that they’re on their fourth consecutive summer.  They're spending this one riding slowly south along the Atlantic coast, making it up as they go along.

After almost an hour, we had to break it off - my first significant interaction since leaving NZ.  I haven't missed people, but on the other hand, the hour we spent yacking was uplifting.

I had a quick lunch, panini and fries and coke, one last pass of the beach, and then climbed away from the coast.

I skirted around Bayonne to the south, before picking up D932.  It was a big road – maybe a main one into Spain – but it got smaller as time went on.  It was fast travel, apart for the last couple of kilometres after the turnoff to Cambo-les-Bains.  I sincerely hope that before too much longer, I will stop seeing "lesbians" whenever these signs pop up.

Once in Cambo, I found a nice little guesthouse and got situated.  I declined to park my bike in the garden, but the next offer was the basement, which I gratefully accepted.  I had a good shower, and then took riding clothes and compression tights to the laundry.  I was told to come back in an hour, but communication was challenging, so we'll see what happens!

Health wise, things seem to be going fine.  My mood has improved a lot since the "oh well" response at Charles de Gaulle, which is good, I suppose.  I'm definitely having "wow" moments, but for the most part, my mood is pretty neutral.

The outside fingers on my left hand are numb – bringing a watch was a bad idea - I didn’t wear it today or yesterday, and anticipate carrying it around for the rest of the trip.  In contrast, my right hand is almost 100%.  My feet are fine, and my bum is very good, considering I've just ridden 1044km in the last five days.

Returned at 4pm to clean clothes, and after taking them back to my room, went for a stroll.

I stopped for a beer - I hardly touch the stuff at home (depressant, anyone?), but the cold, savoury effervescence really hits the spot, and lord knows, I'm getting through the calories. I managed to tap out a short summary blog of the last week on my phone, and bought some dessert from the supermarket before settling on a pizza place for dinner.


As nice as the riding has been, it's been good to have some time off the bike today.  I've booked a room at the Ibis in Pau, so no accommodation anxiety tomorrow, even if the first ride in the mountains is long.

I'm aiming to suit up before breakfast tomorrow at 8am - not a gross prospect after this afternoon's laundromat visit!  I'll roll as soon as I’ve brushed my teeth.