Morning started well, with usual Ibis Budget breakfast buffet, but a frustrating wait for Skype with Kaitlyn.  The hotel had a cool map of the Pyrenees, and I could make out the valley I'd be disappearing into later in the day.

I was underway at 8:40am, and stopped soon after at a market for fruit (apple, two apricots and two bananas).  A guy in the queue told me the Aubisque-Soudet road was closed (maybe!  Combo French-English, and I may have got the wrong end of the stick…!)

The day's ride replicated Stage 13 from the 2011 race, from Pau to Lourdes.

I headed out and enjoyed flat terrain for a while.  The "race route" added a 60km to the direct route to the base of the Col d'Aubisque, and hooked in about half-way between Pau and Laruns.

There was a strange long-cut at Bougarber - I'd carefully mapped the route to avoid using Rue la Carrere, which struck me as odd when riding it.  On closer inspection, the "obvious route" passed through a tiny stone arch.  No way a Tour de France peloton would squeeze safely through that!!!

After Bougarber, the road began to undulate.  I almost came a cropper at a roundabout in Lacq, despite indicating left, a woman driving “didn’t see me” and I pulled out of the turn at the last minute.   Lucky I was watching her – she sure as hell wasn’t watching me!

The French scenery does not disappoint, and old buildings and views of the Pyrenees were constantly having me reach for my camera. 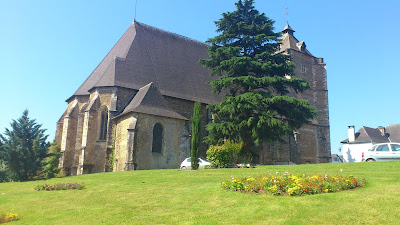 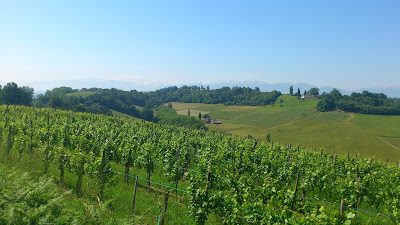 Not long after leaving Lacq, I had the first of two warm-up climbs, the Cat.3 Cote-de-Cuqueron.  That was followed by an apparently longer, yet lesser rated, climb to Cote de Belair (Cat.4).

I had an expensive coke at Sevignacq-Meyracq, and then descended into the valley of Le Gave d'Ossau.  I recognised the road from yesterday after about 30 minutes in the valley, and soon passed the turnoff to Col de Marie-Blanque.  I stopped for a drink, crepe and coffee at Laruns.

As befits an hors categorie climb, it took ages, mostly because the scenery was so damn good and I kept stopping to take photos!


Apart from duration, the gradient was good, and my legs felt mostly fine - I nice change from yesterday's "bad sensations" on the Soudet and Marie-Blanque.  Perhaps the gearing I had was fine afterall...!  (And maybe my legs yesterday were just trashed from big days out of Paris?)

Matt Ladagnous (FDJ) must be local, as there were very many signs on the road for him.


There were many motorcycles enjoying the road, and a surprisingly large crowd at summit.  A kind old guy photographed me with the large bikes. 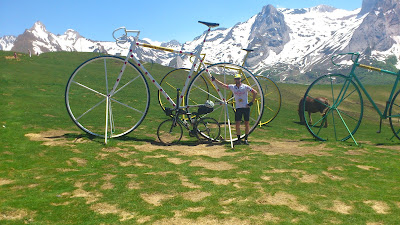 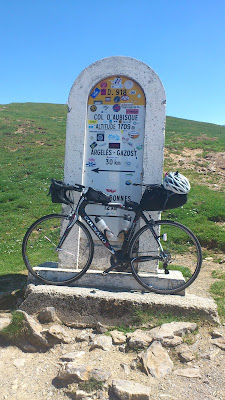 This summit had horses roaming free (instead of the cows, like at Marie-Blanque).

I got stuck behind car for first part of descent, but stopped and made good use of my camera.  Among other subjects were a couple of unlined tunnels.


There was some snow around and in one place a (very) minor avalanche had slid onto the road.

There was a short climb to Col de Soulor - HC in its own right in the other direction, but a minor bump after Col d'Aubisque.  There was a much smaller crowd there, but still many people.  On the way up, I'd passed one fully-loaded bike in between – nice work man!  (On the pedalling, that is - not so much on the packing!) 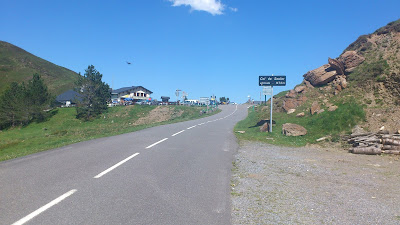 The drop down into the next valley was long and relatively uneventful, well apart from a bit of alarm when a van pulled out on me.  Thankfully no emergency action needed.

Unfortunately, I got onto a motorway section by mistake – ignored “interdit” sign below a picture of a bike.  For the first time I can remember, I was tooted at by drivers – indignance, concern, or “tut-tut”.  Probably the latter!  Once I had internet access, it turns out interdit means “forbidden”.  Good to know (and better to know in advance)!  [I felt a little bit better when I got back to NZ, and noticed we do the "no bike" signs differently, and much more intuitively!]


After a few nervous and somewhat excrutiating kilometres, I managed to exit the motorway, and was soon after rewarded by a cycle-path which took me into Lourdes.  So near, but yet so far, and I spent aaaaages looking for my pre-booked hotel.  It turned out Lourdes has both a "Rue" and a "Boulevard" de la Grotte, and I was looking at the wrong one.

The hotel was worth finding though, and it turned out to be a nice place, as well as cheap.  After a shower, I headed out for dinner.  The recommended place was closed, as was the supermarket, so I ended up at a bar for a burger, risotto and a big beer.


Had a lovely Skype conversation with Mum and then video-chat with her and Dad, before heading to bed.  Another good day done.

Next:  three days of trying to get up the Tourmalet
Posted by sifter at 9:47 PM