After a weather-disrupted few days, it was time to get back into business.  And, today's stage really is the business - a replication of Stage 14 in the 2011 race, riddled with big, albeit obscure, climbs.

I woke to grey skies, and wet roads.  I set off in arm and legwarmers but soon had to take them off.  La Garonne was still looking fairly angry, but the waters had receded a lot since last afternoon's recce. 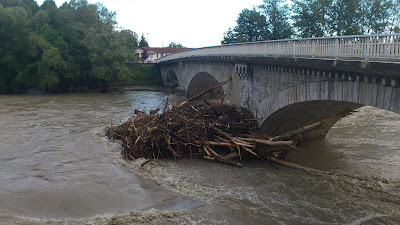 It was about a 20km warmup to the start of the Col de Portet d’Aspet, and as it was featuring in the 2013 edition only a few weeks away, I was back in amongst the public service announcements. 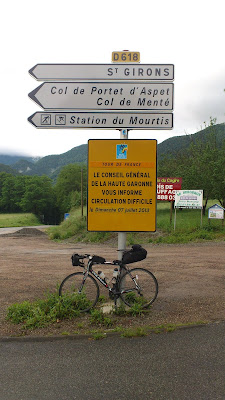 On a more sombre note, this climb was familiar to me, and most who follow pro-cycling, due to a fatality in the 1995 Tour de France.  As I started the climb, I was horrified to almost immediately see a road-side tribute to Fabio Casartelli, presumably where he fell.  It was no more than 200 metres from the base of climb – on the very last corner he had to negotiate.

Around bend itself was the memorial – there I also found an Australian tour group, whose number included current 24 hour world champion mountain biker, Jess Douglas.  I was familiar with her through following my Cape Epic team-mate, Megan Dimozantos, and Wellingtonians, Jude Young and Charlotte Ireland.  I chatted to them for a bit, and learnt that they were cherry-picking 2013 stages with full vehicle support.


The Cat.2 climb took about an hour, and after a quick photo stop, it was time to take advantage of gravity.


At the bottom, I met two guys I’d seen arrive on their bikes at La Grotte in Lourdes two days earlier.  Dutch, I think.  I talked briefly to one, before clearing off.

The Col de la Core was a long but beautiful Cat.1 climb and it was wet over the top.  One good thing about touring is you never ride into bad weather and wished you'd stashed a coat in your pocket - everything's always with you!  (The flipside, I guess, is hauling it all around when you don't need it!)

I stopped at the very bottom for a long lunch.  Today's treat was salad, a deconstructed kebab and fries - the "menu du jour" surprise was turning out to be a highlight of each day! 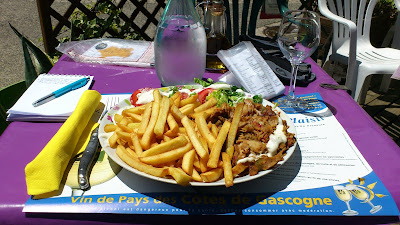 There were heaps of other cyclists in the area, which was somehow nice.

After lunch, I had a slow climb up the valley from Seix to the base of the Col de Latrape, a Cat.2 climb I'd never heard of, and then a short descent leading straight into the 10km Cat.1 climb up Col d’Agnes.

I was stunned to see "Mimi" written on the road - this was the name I'd given my maternal grandmother some 40-years ago (much to the amusement of my Māori cousins, despite the pronunciation being "mee-mee"!).  I'd thought of her when I'd passed through Mimizan a few days earlier (mid-Stage 9 from 2006, between Bordeaux and Dax).  Today's twist was that it was the first anniversary of her death, and the graffiti brought feelings of both happiness and sadness.  She'd have been smiling knowing what I was doing today, that's for sure.


The climb was hard work, but I was rewarded with stunning views, both near and far. 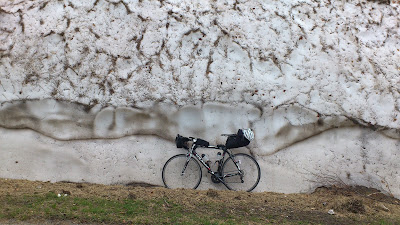 Not surprising, given the road-side snow banks, it was cold at the top!


After another short descent, I stopped for coffee at a lakeside café, and then straight into a short 4km Cat.3 climb up Port de Lers.

That was followed by a proper descent (Port de Lers would have been Cat.1 in the opposite direction), and a snack-stop at the bottom - this time two apricots and a Pepsi.

Then my legs fell off.  I slogged down-valley to the main road and needed yet another snack.  Then it was onto a false flat road to the base of the final climb for the day, the ski-field access road of Plateau de Beille.  The base was 15km from Ax-les-Thermes, where I had accommodation booked, but first a 16km hors catégorie climb ascending 1200 metres.  And then, I drop back down the way I'd come.

Someone's gods somewhere were smiling on me - tomorrow was another anniversary - my mum's birthday.  Her name is Suze... 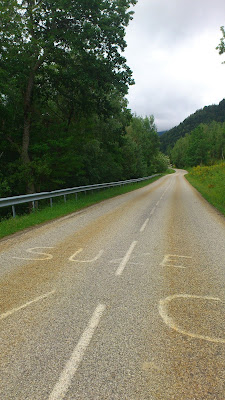 With about 4km to go, I'd disappeared into the cloud.  Eventually I reached a series of large and empty carparks, and at the very top, some buildings associated with the ski-field. 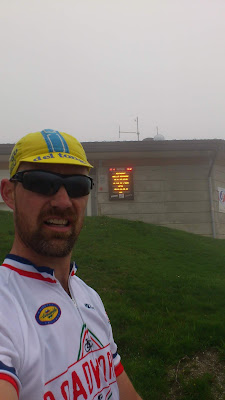 The descent was very cold and for a long while I had very low visibility in the cloud. I really grovelled through to Ax-les-Thermes, the 16kms taking me 40 minutes.  It didn't help that I was oblivious to the false flat.  Mercifully, I found my hotel without trouble.

Called Ma to wish her a Happy Birthday, and to tell her about the day's incredible graffiti.

After doing my washing, it was a short walk to a nearby restaurant for a 9pm dinner.  As just reward for the day's efforts, I ordered a main-course risotto as well as a pizza!  The waiter double-checked I wanted both!  YFY I want both...


Postscript:  I look back on this day with a sense of pride and fascination.  I'd set myself a somewhat arbitrary goal of riding an old Tour de France stage each day.  The Plateau de Beille climb added two hours to an already tough ride.  It wasn't famous - I probably hadn't heard of it before planning this trip - I could easily have skipped it.  I didn't, which tells me something about my tenacity and focus.

While my "average" mood is low, treatment for my depression almost certainly smooths things out a lot, with both the peaks and troughs squashed in towards each other.  Whether it is that, or some other aspects of my personality, (or all of the above) I don't experience sadness in the way I expect to, nor when.  It was nice to cry a little when I wrote about Mimi (and now).
Posted by sifter at 11:22 AM