The day started with an awesome breakfast – plenty of croissants and Nutella.  Then I rolled out to ride the 6th stage of the 2011 race in the reverse direction to that of the peloton.

With breakfast still in my mind, it was straight into a beautiful 20km climb up to about 1000m.  It was cold with occasional drizzle, so I had my coat on for much of it.  Then followed a steep descent to St-Pons-de-Thomieres.  There I had a quick bakery stop – served by a guy that reminded me of Lafayette from True Blood.

There was an awesome old building in the main street – very large, but not at all ornate, and it wasn't clear to me what it was used for. 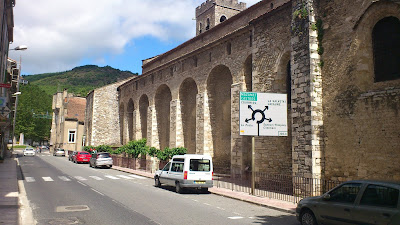 I left town to start a down-valley run - into a headwind yet again, but I made good progress nonetheless.  I stopped for an omelette and frites at Olargues - a medieval city and one of the most beautiful villages of France (accroding to the sign).  After fueling up, I had a bit of a walk around.

I enjoyed the very narrow "streets", some of which had steps in them. 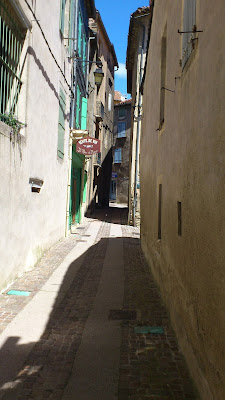 I followed my nose up to the very old tower at the top of the hill.  There I found old foundations of buildings that didn’t survive, or hadn’t been restored, like the tower. 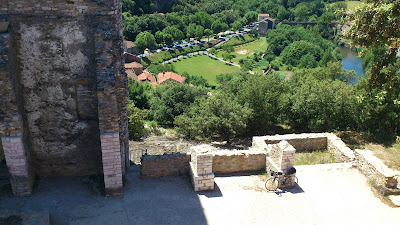 From Olargues, I made my way down a beautiful valley with nice old bridges etc.  I was forced to detour just before Bedvieux and onto an upcoming 2013 Tour de France route again. 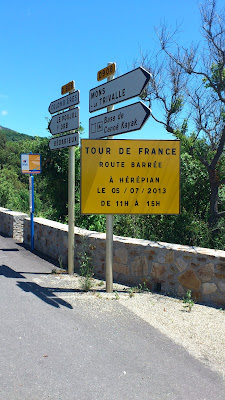 Near the top of a hill, a 100m-long tunnel avoided the final few metres up to a ridge - the road continued to climb in it, before dropping down - a very nice bit of engineering.


Out the other side, I met two cycle tourists - a Canadian and a Brit I think.  He’d written a book about cycle-touring in France.

A couple more lumps and bumps followed, but now with an awesome tail wind, resulting in great progress.  I decided to take a parallel road to the one I'd mapped into Montpellier, in the vain hope of finding my hotel more easily.  This turned out to be a silly move - I'd stumbled onto a really busy road, and it wasn't a great route after all.  In any case, I made it to hotel relatively easily.  A shame – it would have been better not to find it.  Formula 1, never again!  (It had communal, smelly toilets and crap WiFi reception, apart from on a flight of stairs.)

There was a massive supermarket nearby with an equally large solar panel array above the carparks.  Inside, there was a big digital display saying how much of the mall was being run off the power produced.  The sun was baking, and the mall humming as a result. 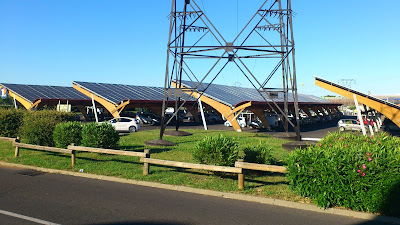 I bought some pizza bread, chocolatines and mille-feuille for "dinner" and a litre of chocolate milk.  It was hard to get comfortable at the hotel, not least because there were so many smokers around.  Once I was done battling for an internet connection... 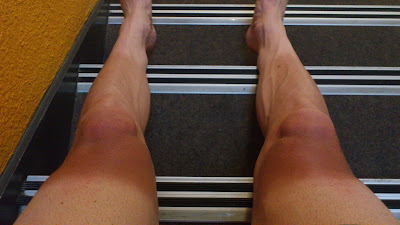 I'd given my self the next couple of days to get to Carpentras, and was going to use them to do some on-bike sightseeing.

After a fairly lazy start, I headed west a bit to hook into a route around a large lagoon, careful not to spend some time on a section of motorway.

At the far end of the spit between the lagoon and the Mediterranean, was La Grande Motte, a somewhat gross sea resort.  It was early, and windy, but there were already lots of people heading to the beach. 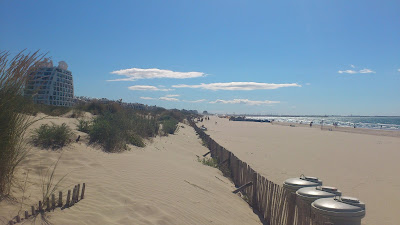 Further east were some very cool little towns - Le Grau du Roi with a little port, and then Aigues-Mortes with its fortifications, including one tower set up as a lighthouse. 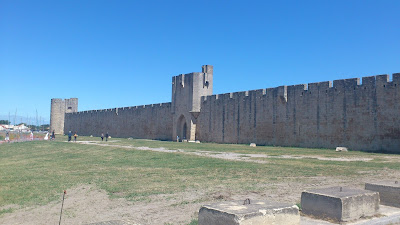 I stopped for an ice-cream, drink and diary catch up near Albaron, then off to find some flamingos.  I didn’t get far at all, before stopping for a proper lunch – ham and melon, steak and chips, and yoghurt and coulis for dessert.  The middle of the steak was about as cold as the yoghurt, but there was heaps of bread at least.

I rode 3km down a very rough road before finally spotting some flamingos.  I'd been warned by the waitress that it might be too hot for them to be out.  Somewhat disappointed, I accepted a few off in the distance was as good as I was going to get, and headed back to find Arles (which I knew would be there)!

The wind was not so favourable in this direction, and the signposted road to Arles eventually had a “no bikes” sign, which necessitated some faffing around.  A kid on bike provided me with an escort until he dropped his ipod, leaving me to continue.   He shouted directions after me, but despite a few weeks in France, I didn't quite know my gauche from my droite!    On my own, I found another bridge and watched boat sail past that I’d seen from a stop bank a few kilometres out of town. 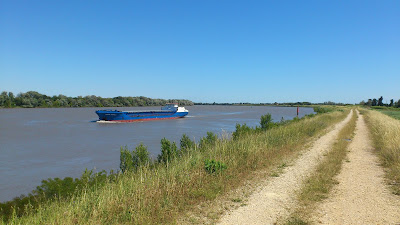 I had a quick cruise into Arles, but it was pretty aimless really, so soon turned around. 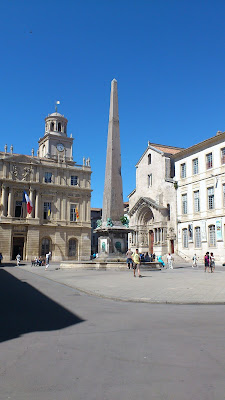 The 30km ride into Nimes felt like an HC climb.  There was an INSANE headwind, which had me down below 20km/h for a much of it.  Fascinating road kill was a good opportunity for some respite. 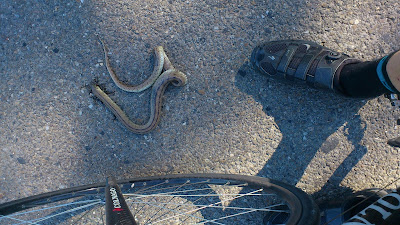 The Ibis I'd booked at was well signposted, but it was also adjacent to Gare SNCF, and was easy to find.  I had a nice shower, and then a stroll around town, passing the arena and an old temple. 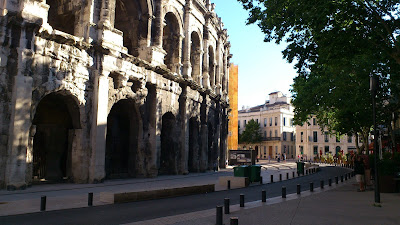 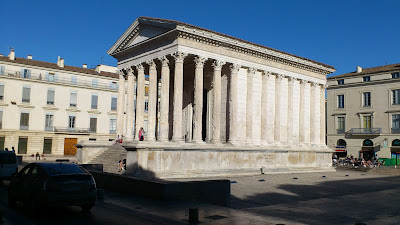 By then, I'd worked up some hunger, and had a pasta meal across the road from the railway station. 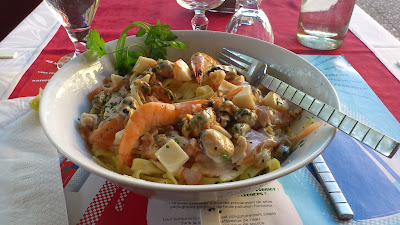 Both physically and mentally well, though nursing a couple of minor irritations.  I'd been stung by something on my left quad the day before, and it was a bit inflamed today.  Also, I wandered into a barb wire fence at ankle height going for a piss at a layby.  Seems OK, and could have been a lot worse, given the circumstances!

The next morning, the small breakfast area was full of Russian teenagers!  Still, I managed a big feed, then went off for a bit more sightseeing, this time with my bike.  I headed to Roman garden and then up to remains of a tower on the hill.  There were interpretation panels around, and it was clear that how the Romans had moved water to, and through the town was impressive. 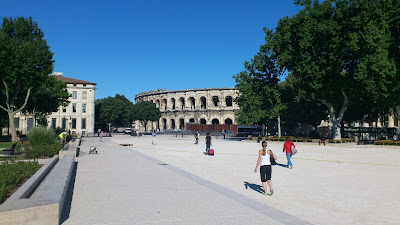 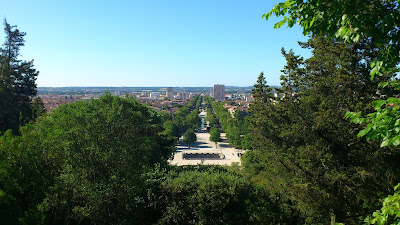 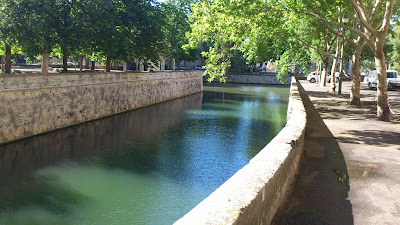 After about an hour looking around, I called time and then hit the road towards the Pont du Gard.

My GPS started bleating when I missed a turnoff.  Heading back, I soon realised why.  A small country lane turned into a rough driveway which in turn just stopped.  I was unable to overcome the reluctance to turn around, and after a bit of bush-bashing, picked up a sweet bit of singletrack.  I rode a little, but spent much of the 3km wishing for my MTB! 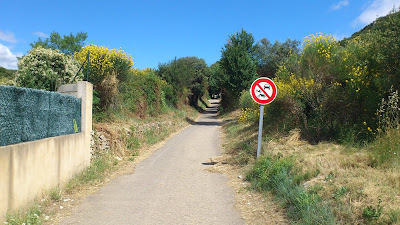 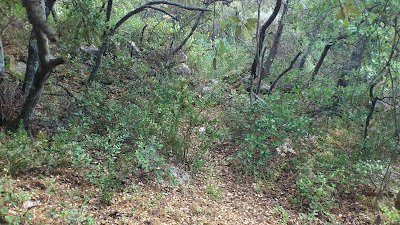 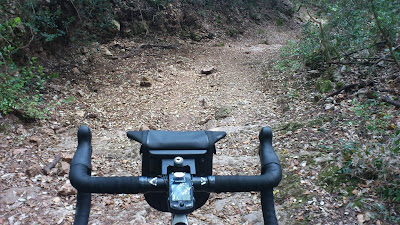 Nearing the road I should have taken, I saw remnants of the water race, and then the Pont du Gard itself.  It was very impressive in its own right, but it was also cool that access to it was free, and there was excellent infrastructure around it. 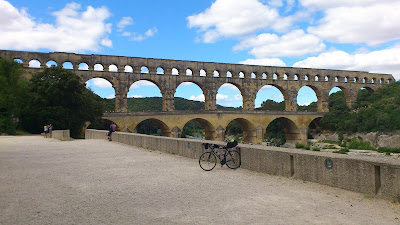 About half way to Carpentras, I had to pass through Avignon - I didn't go "sur le pont, d'Avignon", but I hummed it...! 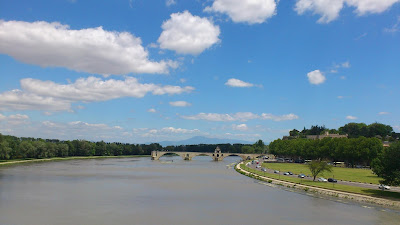 I was fascinated to realise I was quite happy passing by things at riding pace, and indeed, I was more at ease when moving.  Perhaps one day it would be nice to return to these places and slowly explore on foot, but after a couple of days sightseeing, I was looking forward to cracking into another stage the next day. 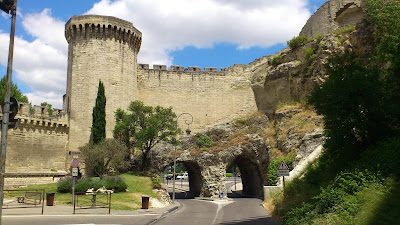 It was very windy for the final stretch into Carpentras.  I stopped in the outskirts and scoffed a packet of chips and a litre of peach and banana nectar.

Head to Office du Tourisme, and after one failed attempt on my own, got them to organise me a room across road at Hotel d’Olympic.  It was nice enough there, despite having to put mon velo in the garage with all the guest cars.

The concierge said winds were forecast for 80km/h the next day.  I tried to extract a comparison with what was going on outside, but to no avail.

I couldn't refresh my voltaren supply at the pharmacy without a prescription, so bought some nurofen instead.  Then I headed to the laundromat to give my riding kit its 3rd wash, to celebrate starting the 3rd week of riding!!  It was a very boring process, but definitely worth doing!  I hung it by my hotel window to dry, and then had a nap!!!!!  (One of only a few afternoon naps in my adult life, hence the exclamation marks.)

When I woke up, I had a chat to Sarah, before going next door for dinner - a very bland spaghetti bolognaise, washed down with beer and pineapple crumble.  Then, it was back up to bed.

The folk in the next door room were having very loud sex.  And celebrated by going another round!  Chapeau to them, I suppose.