I woke at 7am with a big mosquito bite.  My bib-shorts were still a bit damp, so headed for breakfast in my evening wear.  Jumped the gun a bit, and got told off by the hotelier!  Booked in for three nights, so not a good start!

On the road just after 8am - today's ride replicates Stage 12 from 1994, with four monster climbs.  Straight onto the Cote de Loucrop (Cat.3 in race, and not one of the monsters).


I was surprised to reach Bagneres-de-Bigorre so soon, from where the base of the Tourmalet was so close up the valley.  It was hilly for the next while, and I stopped for two pain au raisin and a coffee at a village cafe.

At Montrejeau I stopped at Super U for an apple and a litre of orange juice for my bottle.  Halfway up the valley to Bagneres-de-Luchon, a nasty headwind started.


Was nice to stop for lunch in town – another “menu du jour”, which are a great treat – today's fare a bowl of chicken noodle soup and bread, ham with pea, bean, mayo stuffing and bread, rice and pork stew, and chocolate mousse!  BOOM!

Onto the Col de Peyresourde climb, passing the Port de Bales turnoff.   There's rain threatening, and I keep putting my jacket on and off.  Was passed passed by an Italian dude near the top – stopping for too many photos!


The descent was warm, but weather was getting worse in the valley.


No sooner had the descent off the Col du Peyresourde finished, than the Col d’Aspin climb began.  It was beautiful, with lots of switchbacks in open forest, and it was cool to see a kiwi painted on the road.

As I climbed into the cloud, the air temperature got noticably colder.  About 15 minutes from the top, a thunderstorm started - it sounded awesome booming in the mountains. 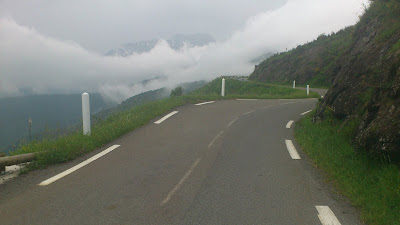 I didn’t linger at summit – it was getting really cold!  British motorcycle tourists there told me the Tourmalet was closed.


I had to stop early on the descent to put overtrou on.  When into the valley, I added my undershirt as well, and at the base of the Tourmalet, the heavens opened, and I put on my beanie and arm-warmers on too.

I spoke to roadie in just lycra, who was also cowering in the shelter of a church at Sainte-Marie de Campan.  He said it's easy enough to carry bike between barriers on the Tourmalet. 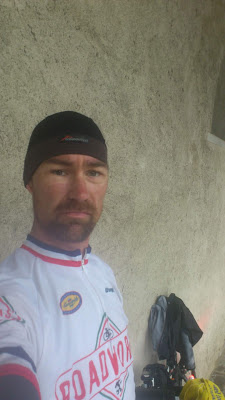 That's the good news.  The bads news:  the thunderstorm is still at full noise, and there's heavy rain.  What with that and the plummeting air temperature, I decided against going up.

Stopped for coffee at Bagneres-de-Bigorre, with short ride back over the Col de Loucrop to Lourdes.  I showered, skyped Sarah, caught up with Facebook, then went off to find dinner.

It was disappointing not to complete the stage, missing both the Tourmalet, and the Luz Ardiden which was meant to follow.  My GPS had a tantrum too, just before Bagneres-de-Luchon.  From there, the ride back to Lourdes was 92km, and almost 1800m of climbing with two Cat.1 climbs.  Total for the day was 198km, bringing my total to just over 1600km since leaving Paris 8 days ago!

Woke to a wet day, which wasn't a surprise, since the forecast had been bad.  The hotelier seemed very discouraging about going up the valley, but I was keen to see if I could knock off yesterday's climbs.  I put leg and armwarmers on, merino undershirt and rain gear.   I got 10m out the door, then wondered whether to turn around!

Made good time to Argeles-Argoszt, at turn of to Luz-St-Sauveur - the mass of cold air riding down the river was amazing.  Feeling fine, but already realising the folly of climbing.  Stopped at first avalanche shelter for a banana, and ruled out riding up Col de Tourmalet - however cold it was in the valley, it would be way worse at 2115m above sea level.  Luz Ardiden wasn't as high though, so decided to keep that option open.

It got colder and wetter as I climbed up the valley, the already flooded river becoming increasingly impressive.  Got to the base of Luz Ardiden and decided against taking on the 1000m climb to 1750m - it was already cold enough at 750m.  Also, the road was very wet, and unclear how safe the descent would be.  On the other hand, I was treated to a small reminder of home - a van parked at the bottom had a big Cactus Climbing sticker on it!  Cool!! 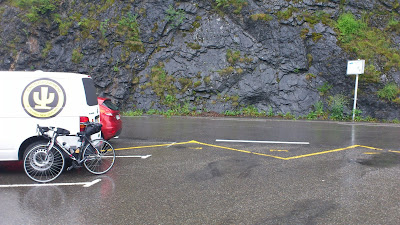 I looped back through Luz-St-Sauveur and crossed a stream which had sound of thunder emanating from it.  Stood, watched/listened for a couple of minutes - it was obvious things were going a bit crazy up in the hills!

It was a very wet descent back down valley, but not too uncomfortable.  I think putting on my jacket's removable hood under my helmet made huge difference.  At the bottom of the gorge, the river  was beginning to overflow onto road, and a crew were just in the process of closing it.  Back at the hotel, I was told the road to Bareges halfway up the Tourmalet climb was impassable due to flooding.  It really did feel like I'd dodged a bullet - god knows what I would have done with my limited French, had I been trapped up there...

A perfect way to embrace the situation was a trip to the laundry.  I took the rubbish bag out of bin and filled it with wet clothes.  I rinsed my socks in the shower – black shit came out for a few minutes! I had a nightmare at the laundry - I couldn’t get the powder machine to work, then paid for the wrong machine!  After realising my mistake, I couldn’t transfer my clothes to it within time limit, so 4.5 euros down the drain, and to add insult to injury, I had to go get more change.  When I got back, a friendly couple explained how it all worked:  choose 1 for powder dispenser, pay 1 euro, choose washing machine, pay 4.50.  Dryer was another choice and select temperature on dryer, and pay 1 euro.  Simple if you know how, but the end result was clean and mostly dry riding gear!

At encouragement of hotelier, I went to the Grotte to see flooding.  Aside from being at a major cross-roads from a cycling point of view, Lourdes was a major catholic pilgrimage site.  I'd been inclined to leave them to it, but the weather conditions had made it all more interesting.


After an unheard of amount of sight-seeing, I went back to the hotel for a bit and made Ibis booking for St Gaudens, then went out for dinner.  It will be good to get out of here - three nights is long enough to be without usual conveniences, i.e. DRY SHOES!!   Legs are feeling great – I actually ran up the street to my hotel to stay out of the rain.  My head is better in fine weather though.

Strangely, I felt worse after losing my money at laundromat, than I did pulling the pin on the Tourmalet.  Bizarre… 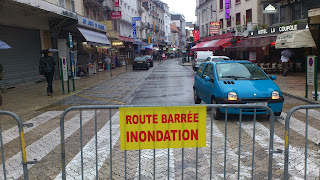 Woke with a bit of a start at 7am, and was downstairs by 7:30am for breakfast (no false start today!).  Flooding was the main story on the TV news.  Both Lourdes and Arreau, which sits between the Peyresourde and Col d'Aspin, were shown.

The hotelier kindly called the St Gaudens Ibis and established road was open but recommended the  N117 instead of the D route across the river.  I rolled out at about 8:30, popping down to river to see state of things - it was pretty shocking, even without checking my old photos!

The was dry but cold, and getting clothing right was initially a challenge.  I retraced my route of two days earlier.  In hindsight, the 1994 peloton probably rode a flatter route slightly to north.

I briefly considered the Tourmalet again from Bagneres-de-Bigorre, but there were very black clouds low over hills and it was still very cold.  I stopped at same patisserie in Capvern and met four Welsh motorcyclists.  One was riding a very cool Ducati Wheelchair bike.  They were heading for Spain and all wore latex gloves under their riding mits. 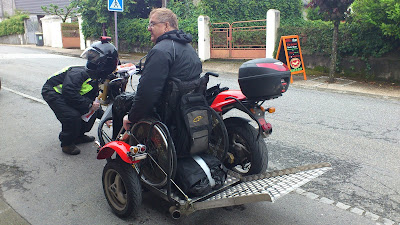 Just before the Bagneres-de-Luchon turnoff at Montrejeau, I saw the field of Paris-Bayonne race, which looked like an amateur, supported stage race.  I stopped and did a bit of cheering which went down very well with most of the field (perhaps except the very serious first bunch).

I had in mind an attempt on the Port de Bales but it was not to be.  The bridge over La Garonne was closed to cars, and the town on the far side was impassable, with all three roads submerged.  I contemplated helping store keepers clean up, but selfishly decided that without a pair of gumboots, I would pass.

I recrossed the river and continued to St Gaudens.  Before finding my hotel, I established that tomorrow’s crossing point of La Garonne was open, and while there, I watched a tree explode against the bridge.

The Hotel Ibis was a couple of kilometres east of St Gaudens.  I decided to take on the 45 minute walk into town - my cable lock was probably OK for a 5-minute dash into a supermarket, but I was heading for a cinema to watch La Grande Boucle, a movie which I'd seen advertisements for ever since Paris!

The movie was fun, though I got very fidgety after a while, my arse crying out for the narrow Ritchey saddle on my bike, rather than this horrible padded thing.  It was an interesting experience being unable to understand anything that was said - all the dialogue was in French!  I'm pretty sure the main character rode the Tourmalet - the closest I'd get to it was seeing (some of) it on the big screen! 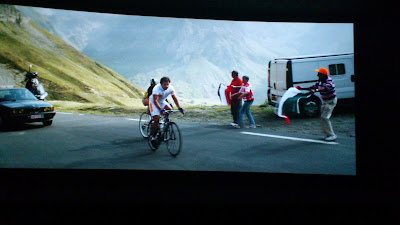 It was a long, slow walk back to the hotel - it had rained while I was at the movie so I was lucky not to get wet!  Reports from the Office du Tourisme had been that waters had risen further in Lourdes, necessitating evacuation of 1000 people including NZers.  It was disappointing not to summit the most-used HC climb in the history of the Tour, but it leaves me with a great incentive to go back.

Relocation costs:  86km over 4 hours.  Back into it tomorrow.


Postscript: not long after I'd signed on for the fundraising trip to ride the route of the 2018 Tour de France, the Col du Tourmalet was confirmed as part of stage 19.  In a further twist, almost 5 years to the day of the flooding I've described above, the Pyrenees were at it again!  Time will tell if I manage to knock this climb off next month!
Posted by sifter at 10:58 AM