Stage 20 of the 2013 Tour would be starting and finishing in Annecy, necessitating a last-minute call to check out the stage myself.  I mean, why not?!


Silas made porridge, but I should have had seconds!  I stopped at the supermarket in the Cullens' village for bananas, apricots and bread, then rode around the lake to Annecy.

Once past the town, and on the stage route, I stayed on a cycle path parallel road the peloton would be using.  I caught a nice old dude also out for a ride, and we got to chatting - he lives in New Caledonia half the year, and Annecy the rest.  Unsurprisingly, he seemed pretty happy with his lot!

Eventually, my turnoff came for Cote du Puge, the first Cat.2 climb of the day.  It was already very hot, and my legs not feeling super.  I seemed strangely focussed on time and progress, and despite leaving all my luggage at Silas and Ange's the bike didn't feel supercharged like it had at the bottom of Alpe d'Huez.


I stopped a couple of times at in St Jean d’Annecy, once at a boulangerie, and again at a coke machine.  A series of three Cat.3 climbs took me through to the base of the Cat.1 Mont Revard climb.  I stopped at a shop near the bottom, and after watching a young boy eat an ice-cream, and to go back in for one myself.

This area looked to be home to skiing in winter, but at this time of year, paraponting seemed to be the activity of the day. 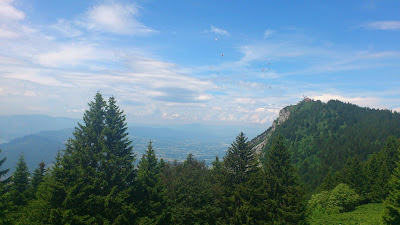 After summiting, I enjoyed a long descent, followed by a lumpy road through to Quintal.  Occasionally, I would catch glimpses of the Lac du Bourget, on whose shores Aix-les-Bains sits. 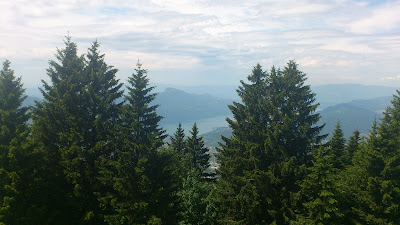 The road crossed a very deep gorge.  The tar on bridge surface was totally melted! 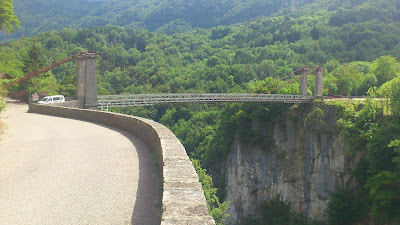 My legs were also totally melted by the time I hit the final HC Semnoz climb.  Many of the kilometres were steeper than the 10% gradient which I'd identified as the tipping point between manageable and hard.  As a result, I spend most of the climb out of the saddle.  Near the top, I resorted to very slow and laboured pedalling while seated.  Rough on the knees, but effective enough. 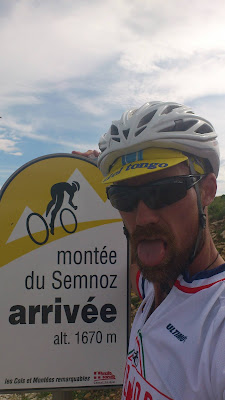 At the top, I grabbed yet another coke, and finish off a pack of Nutella crepes I'd bought earlier.  Befitting an HC climb, it was a nice descent to Annecy – initially retracing the route I'd taken up, but a new road on the lower half.  I was glad I'd carried my vest - despite the very hot day, it good to be able to throw it on for this.

I had to pass through Annecy on my way home.  The lake front looked like it had been busy, with the last of the sunbathers packing up. I'd arranged to meet the Cullens in Dingy-St-Clair for dinner.  This necessitated a climb over the Col de Bluffy.  Luckily, this wasn't too large a climb, but I did take a wrong turn over the other side, and and ended up riding a 1km climb which turned out to be a dead-end.  Paying more attention to signage on the second attempt helped.

There was no sign of Silas at Dingy, so I fired up my phone (which had been in camera mode all day long) to find a text message from Silas with a change of venue.  I retraced my steps, minus the dead-end, and was soon back at Silas’s.

As I walked in, a familiar woman leapt up immediately, and said “Hi, I’m Sarah”.  I didn't say outloud "DUDE, I know who you are, I got up in the middle of the night to watch you win the Gold at Athens!!!  And I woke my family up with all my whooping and hollering!"  She was every bit as lovely as she seemed on the TV, and both she and her partner seemed very interested in my trip.


Subconsciously, I must have really enjoyed talking about it – as I lay in bed a couple of hours later, I realised I was excited about getting home.