The Tour de France doesn't always stay in France, so I figured why should I?!  Stage 17 from the 2011 race fitted the bill nicely, with the peloton setting sail in Gap for Pinerolo, Italy.

I woke to an alarm at 0630, and was suited up ready to ride at 7am at which time the breakfast buffet opened.  I seemed unusally organised and had spoken to mum and Katy by 7:40.  But, when I got to my bike, I discovered the puncture repair had failed overnight - the hole in the seam of the tube had morphed into a slit.  I put new tube in, and struggled with the valve and in the end had to get my mini pliers out of my previously unused tool-kit.


Then began a lovely morning ride towards the mountains, and then along a valley.  Lac de Serre-Ponçon looked absolutely awesome, and feature a small island with its very own church.  While admiring it, I only just managed to avoid riding through a cowpat complete with piles of toilet paper at a layby.


I stopped for a coffee in Embrun, and seemed to be stopping every few minutes to take photo of the river, lake or mountains.

After the hydro dam at the head of the lake, the road followed the valley for a long while.


The first major climb of the day started at a rather scungy looking L'Argentière-la-Bessée.  I felt fine on it, which was nice after yesterday’s ride.


I had a bit of trouble getting onto the final climb into Briançon, but it was worth the effort, featuring a small unlined tunnel, and then a very mellow rise which didn’t seem worth its Cat.3 status. 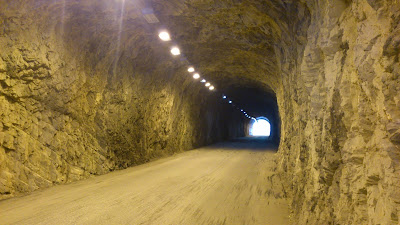 I made do with a supermarket lunch in Briançon, and then hunted around and around for bike shop. As it turned out, there was one on the stage route, and I managed to buy a new tube (it was a relief to now have an intact one!!)

The climb out of Briançon to Montgenevre was fun, particularly because I was looking forward to the France-Italy border at the top.  I passed the Lautaret/Galibier turnoff near bottom, and had seen the Col d'Izoard signposted on way into town.  Briançon really was a bit of a hub, at least in cycling mecca terms.

In the end, the border was a non-event.  I passed a French police Gendarmerie checkpoint.  Next thing I knew there was a sign in Italian and Cavallieri parked in the square.  There was no passport control, nor anything even resembling it.  I stopped and waved passport in the air anyway! 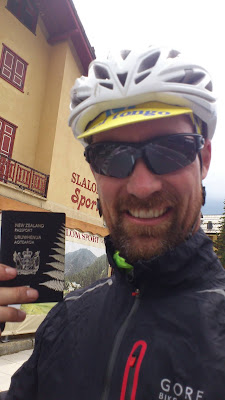 I didn’t like the descent much at all.  It was fast and featured many tunnels which were pretty dark - I was nervous about potholes and cars hitting me from behind, but perhaps drivers were more likely to have the wherewithal to raise their sunglasses in the dark! 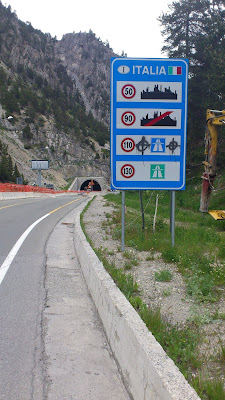 I was fascinated by the frontier.  I was in a new country, but could spend the same currency.  There'd been no passport control, but folk around me now spoke a totally different language.  Weird!  Especially for someone from an island nation - changing countries by plane, and with all the associated fuss, seems much more natural.

The Sestrieres turnoff was at the bottom of the descent.  Again, it didn’t seem bad, though it got quite cold, and I had to put my jacket on before the summit.  The weather looked totally shithouse up some side valleys, but there was no rain on road. 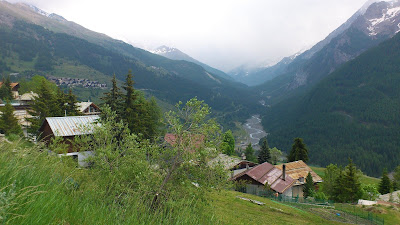 I put my beanie, hood and overtrou on for the descent without realising exactly how long it was - it turned out I'd be descending for the best part of about 45km!

The first section had a bunch of tunnels again, but little traffic.  I started to notice some clear cultural differences.  Here, people would have front yards on the street, and there were quite a few old folk sitting watching the comings and goings on the road.  I noticed more colour too – the Italians actually painted their houses!


After an age, I got to my turn off in Villar Perosa - as per the race, I had the Cat.2 Pra Martino to negotiate instead of another few kilometres down-valley.  As it turned out, I'd screwed up the mapping, and paid for it.  Nothing quite like taking a steep route only to find yourself at a dead end.

My right foot got quite sore on the descent.  My outside toe had got a bit crushed, and every bump – and there were many – put a jolt through it.  I did enjoy recognising the carport where Thomas Voeckler had ended up during the stage, and managed to avoid emulating him. 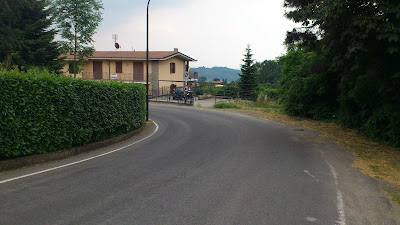 Once down in Pinerolo, it took a wee while to find my hotel, but the search was nothing on some of my earlier debacles.   At check-in, I had a nice chat to the dude at the desk who was a keen cyclist himself.   He was on Alpe d’Huez and watched as Armstrong passed Basso in the time trial stage I’ll replicate in a few days' time.  He rated Col d’Izoard as his favourite climb, with Alpe d’Huez a close second.

After a shower and my regular evening routines, I headed to a restaurant next door for dinner.  I had a pasta entrée, and then pizza, followed by tiramisu for dessert.  It was a stretch, but I did it!