On the 4th of July, I rode from Morzine to Bellegarde-sur-Valserine.  The day had a few notable highlights, mostly of the maintenance-kind.

On my brief foray into Switzerland, I passed a bike shop and was finally able to replace my rear tyre!

When I arrived in Bellegarde, I was in time to see the town of Aigues-Mortes on the telly, which I'd last seen up close and personal, on the 23rd of June.

And, I got a haircut (and a shave)!  It was a somewhat torturous process, but with the 90-odd minute barber-shop escapade... 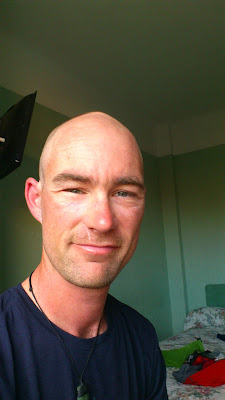 The 5th did not start well, the previous afternoon's internet troubles persisted, and the hotel breakfast was more aimed towards drivers than tour-stage-cyclists.  In a brief moment of connectivity, I  discovered that Oli's dear wife Julia had got a job at Wellington Hospital, which was great news and long overdue.

While web-browsing was nigh on impossible, bizarrely skype was working, so I did manage to talk to Kaitlyn and also Sarah.

I hit the road just after 0730, and was soon into my first climb of the day, the Col de Richemond.  Despite asking Katy to ring Julia, I called her myself, and was quite happy just to leave a message.

My legs didn’t feel at all strong, but I adequate power to get myself up the hill.  A can of Orangina  from village at the bottom probably helped.  On the other hand, the two bananas I'd stashed in my pocket were temporarily slowing me down.


I took the signposted route up the Col de Grand Colombier rather than the one I'd mapped.  I was looking forward to the descent, having seen spectacular imagery from Stage 10 of the 2012 Tour - the peloton rode in the opposite direction to mine, and the sight of them snaking their way up a sharp ridge compelled me to find a way to include this stage!


The climb was steep at the bottom, but had 3km of virtually flat road half way up.  When I got onto the race route, I saw I'd just missed climbing a 19% ramp.  I presumed it was short, and was mildly tempted to check it out, but thought better of it.

The last few kilometres were steep too, and out in open.  From the summit, I could see the Rhône - a river I'd crossed the day before only a few kilometres old (out of Lake Geneva), and which I had also ridden along near its terminus at the Mediterranean.  There were strange clouds over it, and I wondered if I’d soon get wet.

I was excited about the descent!  It was steep initially, and then flattened out.  I was very lucky to catch “Kiwi” written on the road, and reeled the bike in.  When I got back to it, the full text read: “Hendy, Kiwi As” in honour of Greg Henderson, who'd ridden his maiden Tour de France in 2012, and would have had to grovel up the road I was currently blasting down! 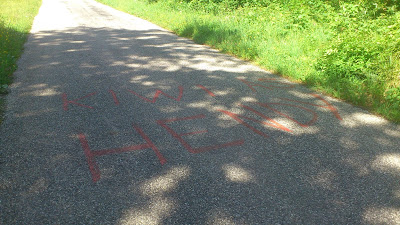 Unfortunately, while the views of the river and lake beyond were gorgeous...

... views of the sinuous section of road were elusive.  That didn't stop me from enjoying the ride, mind you!

I stopped at Culoz, and found a bakery just adjacent to a roundabout where an accident had just occurred.  I couldn’t see anyone hurt - indeed, I couldn’t even work out who had been riding the scooter which lay on the road!  The Gendarmerie appeared quickly, but were gone again within a couple of minutes.

When a couple of guys who'd been smoking outside asked how much my bike was worth, I decided to make my getaway while I still could!

From Culoz, I was pretty much straightaway onto the Col de la Lebe.  It was a really nice climb, and obviously not as stern as the HC or Cat.1 mountains.  After the Col, the road stayed high for a long time.  By this stage the roads were very quiet - in the 12-2pm period, I guessed everyone was at lunch.

I stopped at the Carrefour in Hautville-Lomptes and went straight for a slice of what had become my favourite sweet treet - Flan!  I also bought some tuna sandwiches. And, a takeaway 15-pack of  viennoseries!  5 each of tiny croissants, pain au chocolat and pain au raisin.  I ate some immediately, but later realised I should’ve waited – they were much better having had a bit of time in my pocket to warm up!

After burning off most of my elevation, I then enjoyed a long false flat, by virtue of doing it in the good direction.  I noticed my legs were feeling really tired, and I had no strength.  But, I was OK tootling along.  Stop for coke about 20km out from my destination, which surely helped.

I had a bit of a nightmare finding the Ibis Budget Sud in Mâcon, only for it to be full.  That necessitated a stop at McDonalds, where I took advantage of their WiFi to find an alternative.  That done, I was there soon after, showering and doing my laundry.


Dinner was a mozzarella and tomato salad, mushroom risotto, tiramisu, fromage-blanc – very nice with a bit of sugar sprinkled on it.  I even got to the end of meal and didn’t feel sick!  I would need to get used to smaller dinners again or else I’d be in trouble.

On the way up the Col de la Lebe, I'd asked myself, “Why don’t I miss anything?", conjecturing that it was some sort of self-protection mechanism.   Despite not, I was still very much looking forward to getting home.  Highest on the list of anticipated activities was family mountain bike rides (before our family was one)!