After the previous day's mission, I enjoyed a slow breakfast this morning, but beautiful warm weather and blue skies awaited.

I hadn't been able to find a suitable stage starting in Ax-les Thermes, so the day's route was based on a future stage finishing there.  Sort of.  Stage 8 of the 2013 race was due to end at the Ax-3-Domaines ski-field in a few weeks' time.

I had stayed at the bottom of the final climb, so the first riding task of the day was to get myself up to the top.  In the spirit of self-sufficiency (well, actually, in the spirit of minimising communication with anyone), I decided not to piss around with my gear and took everything up the Cat.1 Ax-3-Domaines (and then straight back down again).


The 8.5km climb went fast with fresh legs and only one full bottle.  It was so nice to be in the sun, and I got back down in reasonably good shape.

I stopped at a café for coffee and two croissants, and managed to get Katy on the phone (the low tech, expensive way in the end – skype wasn’t playing ball).  I made sure both bottles were full, and then got on my way again.

The hors categorie Port de Pailheres climb started straightaway.  It was very mellow at bottom, but still afforded good views back over As-les-Thermes. 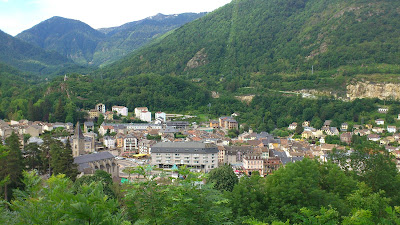 After about 5km of climbing, I started picking off riders from a tour group.  They'd been dropped off by a van, who would stop and check in from time to time.  They weren't hauling luggage, and I was somewhat envious (they in turn, were probably envious of my pace)!

At Ski-station a few kilometres from the top, a single Garmin rider came blasting down, followed by a team van.  I presumed it was Ryder Hesjedal, who was likely to be their GC candidate in the Tour.

It was very cold at the top, and I arrived in a bit of a lather after a steep final kilometre.  There was a cool view across to the village of Bonascre at the Ax-3-Domaines summit.  As a reward for my efforts, one of the riding-tour group kindly took my photograph. 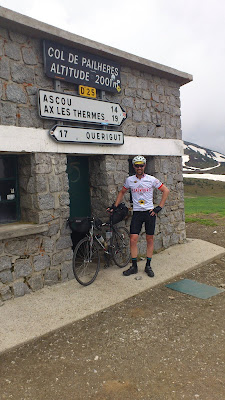 The road down was a work of art.  There were some very tight corners and short sections of road between them.  Despite donning my jacket and fluoro vest and beanie, and the multitude of photo stops, I still got very cold. 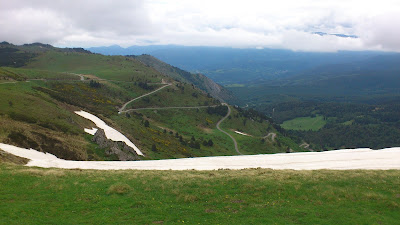 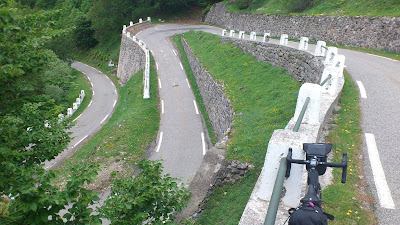 I saw Jess Douglas's crew on their way up - of course they were riding the stage the way it was meant to be done - and stopped to talk to their guide for a few minutes.  He seemed like a nice guy. 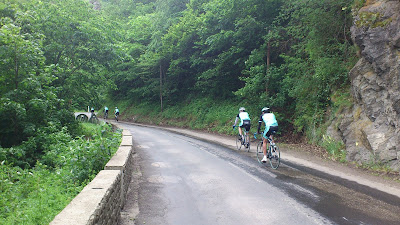 Once the descent proper had finished, the road disappeared into les Gorges de St Georges.  The glorious mountain engineering was almost trumped by the effort that had gone into this road! 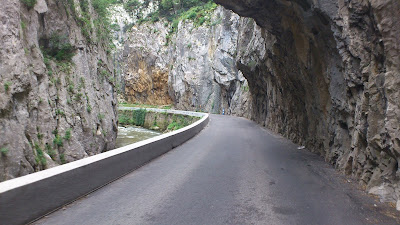 Despite the lost altitude, it was still a very cold ride down the gorge and my fingers got very numb.  When I finally arrived at Axat, I stopped for an omelette.  And then stopped a million times more trying to get more to eat.  Patisseries were closed, a supermarket had about a 10 minute queue, etc.  Finally, I got a couple of apples, a banana and a litre of orange juice.

It was a long ride to Limoux and it seemed like a bit of a dump - definitely out of character with most of the places I'd passed through.  I felt a little sorry for my old school friend Andy Reid, who'd worked here for a bit for Cycling NZ.  I'd battled a headwind riding down-valley to get there, and it didn't seem worth the effort in hindsight!

The next stop was Castelnaudry.  It was up a hill, but despite that had a little lake with heaps of launches on it.  I had some pizza bread and flan and coke and a chocolate donut to take away. Took a long time to get there, but started to feel a bit better upon leaving.

I had been harbouring feelings of frustration about my progress.  Perhaps too much time on internet/phone and not enough getting organised.  The late start hadn't helped.

Fucked around with the sign at the Revel city limit (in honour of the lovely Alex, Michael and Stephanie Revell), and then had a short climb up to another lake. 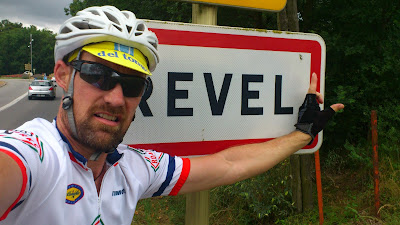 The ensuing descent dropped me onto wet roads - perhaps the messing around hadn't been so bad after all?!  The roads stayed wet for final 26km to Castres, passing plenty of signs that the Tour was coming to town. 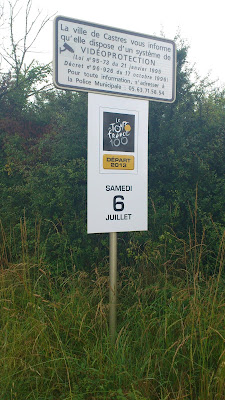 I found my pre-booked hotel relatively easily.  I was delighted to discover that my room had a bath, which I made good use of!!!

It turned out I'd arrived in the middle of a music festival.  When I went out for dinner, there were stages everywhere, often in competition and difficult to hear in isolation!  I settled on a pub, and had a big old feed of paella.